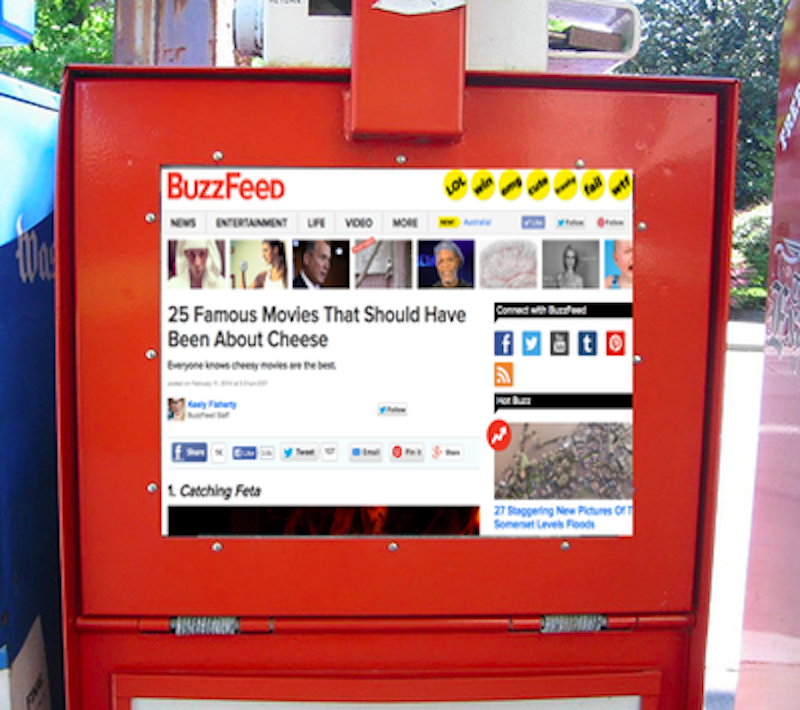 I gave a lecture at the University of Maryland’s Philip Merrill College of Journalism this week. The room of 60 students listened attentively to my Power Point “Is Blogging Dead?” which coincided with their first attempt at blogging. A survey of the room showed exactly two of the 60 students had blogs, though once the question was expanded to include “a Tumblr,” about a third responded positively, though they admitted they hadn’t updated accounts in awhile.

After I was finished, students asked thoughtful questions, including what I thought of BuzzFeed’s recent efforts to launch a longform writing platform. I hadn’t really investigated it, so the question inspired me to learn more.

It’s an excellent question. Could BuzzFeed, a site known for it’s countless listicles, successfully position itself as a medium for traditional journalism pieces a la The New Yorker? With more traffic than nearly any other website on the Internet, it’s possible that a percentage of BuzzFeed readers, tired of flipping through slideshows of kittens on ice or Taylor Swift gifs, might actually embrace reading something.

In his piece “What the Longform Backlash Is All About,” BuzzFeed Editor-in-Chief Ben Smith acknowledged the site’s intention to step up their journalism game.

"'Longform,' two years ago, described two different things: Meticulously crafted magazine articles that had been slapped onto the internet, sometimes weeks after they ran, often made almost unreadable by aggressive pagination and indifferent design; and long, often scarcely edited articles into which a writer had written more for love than for scant pay, and which an online outlet rarely had the resources to edit. Indeed, some of them were long only because they hadn’t been edited.

Our goal has been to take the best of the first tradition, and to apply it in the new medium. That means paying freelance writers better than digital outlets are often able to afford and encouraging our staff to stretch out. It means employing a pair of experienced editors whose sole aim is making those stories better. We also saw an opportunity to discard all the elements of the magazine tradition that have prevented so much great journalism from reaching most of the people who would love it: The long wait for there to be space in the feature well; the worries that a given issue had the right “mix”; the space constraints dictated by a shortage or sudden glut of advertising; and the traditional order of operations that regularly meant that a piece that took two months to report and write wouldn’t appear for six. Above all, we are able to discard the central fact of any great magazine: That the editor must keep in mind a crystal-clear vision of who the reader is, and that every story must be aimed squarely at that reader."

In addition, The New York Times reported that BuzzFeed hired a Pulitzer winner to head up their investigative unit. It seems the site is starting to act more like an old-school print medium more every day.

The result of Smith’s goal is a “Longform” category under BuzzFeed’s main “News” tab at the top of the page. Articles like “Why is the World’s Gayest Sport Stuck in the Closet?” might seem at first glance to be a typical BuzzFeed mash-up of sparkly ice dancing costumes, but it turns out to be a 6800-word originally reported feature, with appropriately credited photos, research, interviews, pull quotes… in short, all the markings of a traditional longer piece that would appear back in the heyday of print magazine features.

The fact that people are reading the articles, particularly on phones, is newsworthy in the young history of online journalism. Megan Garber reports at The Atlantic:

“Earlier this month, Buzzfeed published a piece called "Why I Bought a House in Detroit for $500." The story ended up getting more than a million pageviews, which is notable because it is also more than 6,000 words long. The other notable thing: 47 percent of those views came from people accessing the story on mobile devices. And while people who read the piece on tablets spent an average of more than 12 minutes with the story, those doing so on phones spent more than 25 minutes—a small eternity, in Internet time.”

Smith told The Atlantic: "I actually think that long, immersive scroll is a kind of lovely way to read a piece."

BuzzFeed hasn’t walked away from its frivolous roots. Even the longform department curates collections of longer feature articles that are found on the web from different publications. But drawing attention to the lengthier works of journalists and encouraging Internet readers to walk away from the listicle and spend what Smith calls “dwell time” scrolling through a more in-depth piece? That’s good news for journalists past, present and future.