White Girls! Don't Write About That Black Woman in Your Yoga Class

It will all end in tears. 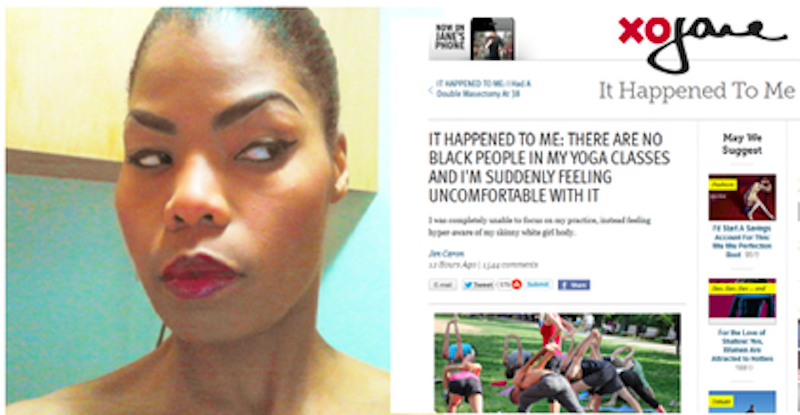 There's this site, xojane.com, where Gen Xers and Millennials post their thoughts about feminism and their lives as women. The posts are hard to tell apart from the comments. The posts all seem angry that one thing or another exists, and the comments seem angry that the posts exist. All you hear is the gnashing of teeth, the aggrieved play-by-play of how the world and its dumbness are falling atop who's talking at the moment.

Maybe the commenters all think they could be writing posts instead. Possibly it bothers them that they're in the minor leagues. If so, they have a point. The posters and the commenters don't seem far apart in talent or outlook. Why did some bottle caps wind up at the top of the heap and some at the bottom? That could gripe you, if you were minded. Or maybe the commenters are happy just to wait and pounce.

The latest episode of blood at xojane involves a young woman and a piece she wrote, one with the Baroque title “It Happened to Me: There Are No Black People in My Yoga Classes and I'm Suddenly Feeling Uncomfortable with It.” The young woman spent a yoga class with a novice student behind her, a black woman who seemed ill at ease and who was “fairly heavy.” The novice gave up fast and spent the class head down and inert on her mat. Because of this, the young white woman concocted a drama in her head. She figured that the black woman felt excluded from a good thing being hogged by whites, and that therefore the woman hated the girl and her “skinny white girl body.”

The skinny white girl then went home and cried. After that, she found a black woman of her acquaintance and related the episode. The black woman, an editor at xojane, commissioned the girl to write up the experience, and somebody put on the 20-word headline about blacks and being uncomfortable. The response was horrific. “Everything about this article is offensive,” said one commenter. “Somehow, the author's attempt to show self-awareness makes it worse.” On seeing the use of “fairly heavy,” another commenter wrote, “my teeth became gritted in rage.” On and on. Soon enough the writer took her last name off the piece and put in a fake.

Now the editor, the woman she confided in, is holding her up with a pair of tongs. “I don’t want people to be hurt,” the editor writes, and she does include “Jen” in the list of those who should not suffer. In fact the editor blames herself for letting Jen go ahead without “more work and questioning.” On the other hand, the editor (whose name is Rebecca Carroll) thinks that Jen is just like those white girls who kept addressing her as “Hey, Curvy” back when the editor was a college student on spring break. The “Curvy” girls, Jen—they “use their privilege to make assumptions about how one individual black woman feels about her body in whatever environment.” The editor links to what she calls an “excellent” response piece to Jen's article, one entitled “It Happened to Me: I Read an Essay About a White Woman's Yoga Class/Black Woman Crisis and I Cannot.” It opens with a photo of its author, who has the whites of her eyes showing to signal ferocity. “All of the side-eye,” says a caption. The piece, addressed to Jen, refers to “the green, moldy outer layers of the rotting onion of your thought.”

The white woman's crime is twofold. First, she seems to think that blacks all have heavy bodies, and possibly (she isn't so clear) that they'd rather have slim bodies. This crime is hinted at by commenters and the side-eye lady; everyone seems in too much of a huff to land on the thing solidly and spell it out. Whereas the girl's second crime is stated thoroughly. Writes the side-eye woman, “You crossed every line from describing your experience into assuming hers, despite having had absolutely no direct contact with her.” You cannot assume about people of other races, or demographic slices. Like the editor, the side-eye lady figures that doing so is presumptuous, an act of privilege.

Of course, it's a privilege that everybody exercises. We all assume about other people, whatever their demographic makeup. The editor herself, Ms. Carroll, pulled some mind reading when she talked about those spring break girls and how they were not just “blonde and thin” but “almost prodigiously pleased with their body privilege.” The ritual at xojane has nothing to do with life as we know it. It's a special case. Somebody's getting it in the neck for privilege, and sometimes privilege can't be detected by straightforward thought and observation. It can slither between the rocks. If you can't quite see it, that's more of a reason to make noise, just so you remember it's there. Accordingly, the side-eye lady lays it on. “Further enacting a societal ill in your efforts to call it out is the worst kind of white privilege,” she says. The worst kind!

Really, the girl's getting punished for being PC. “Politically correct” means making a fuss about the many ways that daily life—especially dumb, comfortable things like leisure activities and movie plots and common phrases—is rigged in favor of the dominant demographic slices and against the other slices. The girl discovers that her inoffensive yoga class is lily-white, and she thinks this matters—she makes a fuss about it. That's politically correct. Back when PC launched, people who objected to such noise were bludgeoned by prolonged hooting about their ground-in, irredeemable bias. Now the girl is being subjected to such hooting. She's the one with the ground-in bias, that shit stain of the heart, and we know this because... she feels bad about the black lady who couldn't cope with yoga class.

Is this a reason to shit on somebody's head? Can't the woman be wrong without being a shambling, filthy wretch? People will now be abused for having their breakthrough epiphany about privilege in the wrong way. Not the right kind of breakthrough about white privilege? Then it's the worst kind of white privilege.

The hunt for bias has become decadent, a game. People practice it for the momentary head-rush of the kill. Break somebody's spine on the Web and the crack makes you stand up tall. The forces of multiculturalism have the distinction of being right about most big issues while being dicks about many small ones. Case in point.