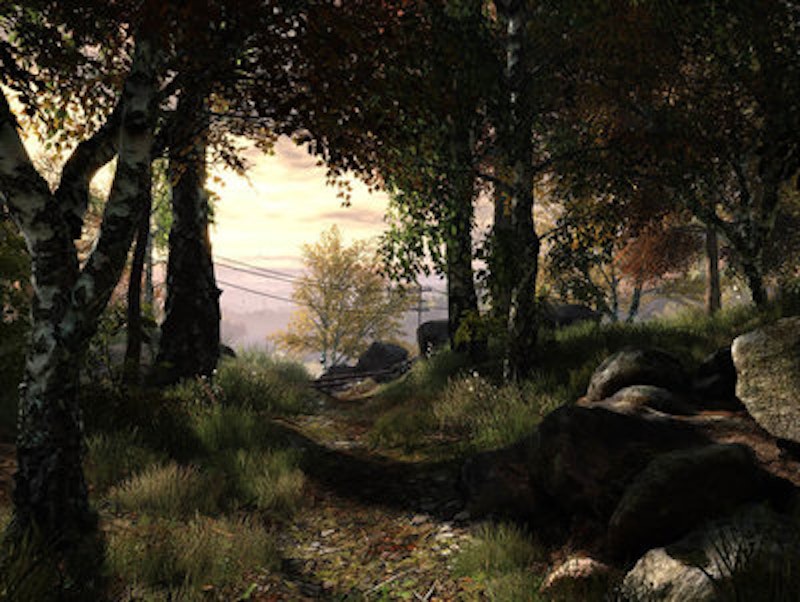 I don’t remember the last time a video game blew me away. It wasn’t Super Mario 3D World. It wasn’t Until Dawn. Despite my love for gaming, it’s very rare that a title knocks my socks off. I’ve been having a ball with Captain Toad: Treasure Hunter. I recently rocked some Organ Trail. Neither game is perfect, but they’re fun. There are hundreds, if not thousands, of AAA and indie titles that are great but don’t revolutionize gaming. They can be shooters like the ‘16 Doom reboot. They can be cool-concept RTSes like Afterlife Empire. One genre, however, can absolutely slink off under a rock and die of exposure: walking simulators.

As of a year ago, I’d never heard the term “walking simulators.” When I did, I thought it was a joke. I dismissed the whole notion until I started hearing about some games not only described as “walking sims,” but also being praised. That praise ends now.

In order of my acquaintance:

The Vanishing of Ethan Carter: In his IGN review, Marty Sliva says: “Aside from the writing, a lot of Ethan Carter’s power also comes from impeccable environmental storytelling. Right from the get-go, you’re free to explore the wilderness to your heart’s content. Areas can be visited in any order you want, delivering a sort of freedom that allowed me to personalize my time. It takes about 25 minutes to run across the breadth of Ethan Carter’s wilderness, but you’ll definitely want to take your time and soak it in. The world is filled with tiny details and scraps of information that beg to be devoured. Which is fantastic, because The Vanishing of Ethan Carter is one of the most gorgeous games I have ever played.”

I’ll give Sliva “gorgeous,” but just like the Sahara might be described as “gorgeous,” that doesn’t mean I want to wander there for hours. Where Sliva and I disagree (and I wonder if we even played the same game) is in almost everything else he drools over. Allow me to translate. “Impeccable environmental storytelling” = “There are lots and lots of rocks. Like tons of them. The game shits rocks.” “You’re free to explore the wilderness to your heart’s content” = “There’s literally nothing to do—at all—but wander aimlessly for most of the game.” “The world is filled with tiny details and scraps of information that beg to be devoured” = “This game is almost 100% filler.”

The reality is that had The Astronauts been honest with us, had they focused Carter only on its mystery/narrative mechanics, it would’ve been max an hour long. And that’s generous. But because the game had been so heavily praised, and because I was dumb enough to believe the ad copy, I bought it with high expectations. Sure, the sort-of-but-not-really-talking-to-dead-people mechanic was cute, but all The Astronauts really had was a giant, meticulously detailed, excruciatingly catatonic diorama. And let’s face it, nobody would’ve wanted to play The Big, Boring Diorama of Ethan Carter.

Gone Home: I have a little street cred with this title. I was born and raised in the Portland area of Oregon, where the game takes place. I spent a lot of time with kids who identified as LGBT. This was decades before being out was cool, let alone barely acceptable. I don’t say this to virtue-signal, but rather to point out my familiarity with the cultural context in which the game takes place. I knew one of the Dandy Warhols (whose album cover appears in one of the game’s house’s rooms) before they hit it big. I also went to church camp with the woman who become their keyboardist. I know Gone Home’s world.

What did the critics say? Here’s a bit from Polygon’s Danielle Riendeau: “Gone Home resonated deeply for me, partially because the particulars of the story are eerily familiar. I was surprised by the story, and even more surprised by my reaction. I've mowed down thousands of bad guys and aliens and evil henchmen in my 25-plus-year gaming career. And I've enjoyed emotional experiences and fallen for a number of memorable characters in that time. But I never expected to see myself—or such a strong reflection of myself and my own life—in a video game.”

I won’t mock Riendeau’s obviously sincere assessment of Gone Home’s more emotional material. I will, however, point out my bafflement. “The particulars of the story are eerily familiar”? I lived the particulars! In the particular era in which they particulated! I visited friends’ rooms that looked exactly like the ones rendered in the game. So what? Either The Fullbright Company knows how to Google or actually lived in Portland and was able to scan or create images from the 90s. I remember where I was standing when Kurt Cobain’s death was announced. Does that make me a praise-worthy music historian? Of course not. And neither does The Fullbright Company’s attention to Gone Home’s detail make it a great game. Rich detail can be an aspect, but not the whole package.

Let’s talk about “great.” If you haven’t seen Riendeau’s review, she gave the game a 10. Out of 10. Riendeau/Polygon considered Gone Home a better video-game experience than Rocket League, Bloodborne, and Uncharted 4 (all nines). I mean, how do they justify that? I played Gone Home for an hour streaming for TechRaptor and while the game wasn’t awful, that’s all I needed. One hour. I’d never played the game nor read reviews, so I came to it fresh. But there are only so many journal entries I can read and drawers I can open before I’ve had enough. I grant that experiencing art is subjective. I grant that Riendeau may be more emotionally affected by scouring teenage girls’ rooms for personal minutiae than I am. But a 10? A 10, to me, means that every aspect of the game is a cut above the competition. A 10 means that years, even decades after the fact, the game will be held in high regard. It won’t be excused for “great for its time;” rather “great for all time.” A 10 means that if you’re handing out nines to such ass-kickers as Rocket League and Uncharted 4, you’d better have a better reason than “the story touched me.” Had I read Riendeau’s review before streaming, I’d have been angry. I’m fine with games being non-traditional, having no violence, not holding the player’s hand, but to designate Gone Home a perfect game? Preposterous.

Dear Esther: Landmark Edition: Unlike Gone Home, the only real thing I knew about Dear Esther was its title. I was vaguely aware of the genre and critical praise, but had no details. When I saw the subtitle Landmark Edition, I got nervous. In my mind, “landmark” doesn’t just mean literally a place that marks the land, but also a monument, an achievement. Almost the equivalent of “game of the year.”

I volunteered to review it for TechRaptor, sat down, and dove in. But before we get to my thoughts, let’s check out what TrustedReviews’ Sam White had to say: “Now the game’s on PS4, it risks being slightly misunderstood by a mass audience. It’s always been an acquired taste, but it’s universally mesmerizing. As one of the first of its kind—the genre of walking sims that swap fast action for patient thoughtfulness, acting as more of an experience than a traditional game—Dear Esther is worth the short amount of time it demands. It’s an interesting story that can only really exist as a game, and that is still something special.”

“Slightly misunderstood” implies there’s something to understand or that’s worth understanding. Here’s part of what I said in my TechRaptor review: “While I can appreciate the genre of ‘art game’ and the fact that many love the genre, it seems to me that if a developer is going to make an unspoken pact with the player that if the experience they’re about to embark on is, in fact, a game, something in addition to rudimentary interactivity should be present. Even in cases such as Depression Quest, there is a driving story and some consequence (although minimal) to the player’s actions. In Limbo, even without the benefits of voiceover narration or color, you feel that you’ve gone through a physical and emotional journey. You could even look back to In Between, where the story and puzzles are so well crafted that they take you on a truly compelling journey through grief. Dear Esther is the video game equivalent of slowly wandering through a museum, without a guidebook, with some random widower popping up behind you and boring you with droning soliloquies about his dead wife.”

“Dead wife.” That right there is, in my opinion, the only reason Dear Esther was praised. A British guy whines about his dead wife. In a “universally mesmerizing” environment. That’s art! Pain plus pretty rocks, even simulated pain and pretty rocks, is art!

I don’t know if the current state of walking-sim tolerance is a counter-culture against the stereotype of gaming (and gamers) being violent, knuckle-dragging, Mountain Dew guzzlers. I don’t know if, in the abstract sense of “gaming culture,” there’s such a desire for the craft of game creation and the hobby of game consumption to be seen as legitimate in the eyes of mainstream society that any avant garde “game” will be not only tolerated, but lauded. I don’t know if reviewers are trolling the rest of us in a massive, lizard-people-led conspiracy to take over the earth by putting the rest of us to sleep after having played these awful games. Whatever the reason, the emperor is naked. Violence, jumping, puzzles, leveling up, combo-chaining, and all other gaming delicacies are awesome, and bullshit “art games” are best left where they belong: freshman post-modern art seminars.