Thousands of technophiles queued up to buy the iPhone 5 on Friday, September 21st. What follows is a random, unattributed sampling of their Tweets and Facebook status posts. 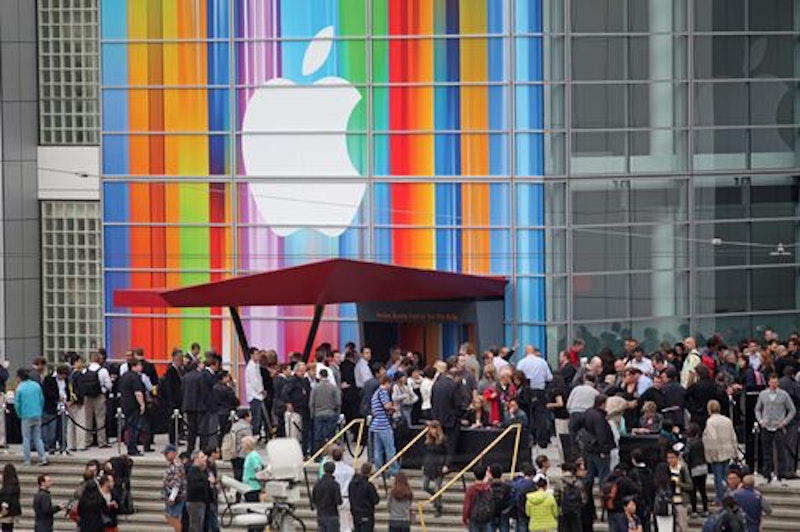 “No app exists for vaporizing serial cacklers or jugglers, it seems.”

“Have you ever really watched coffee curdle?”

“Half the homeless gutter-punk community of Williamsburg is curled up in afghans and Tweeting furiously downwind of me. This means something.”

“Some yuppie just gave me a $20 and was like ‘get a job,’ and I was all, ‘I’m straight bro, I’m a motherfucking lifestyle accessory blogger.’”

“But so the twenty minutes I spent sucking face with Alejandro meant that I missed Janice and Lala brawling around the corner, but since the footage is already up on Youtube from, like, fifteen different angles, what I’m seeing is better than actually being there.”

“Naomi Wolf showed up and hung out and talked peaceful resistance tactics with a group of us for an hour or so until she realized that we weren’t protesting anything.”

“A sub-class of vendors has materialized and is making its way up and down the queue, offering peanuts and energy drinks in exchange for web-traffic IOUs and promissory Diggs.”

“To voluntarily take part in a ‘Gangham Style’ flash mob is to surrender your spot in line, bitches.”

“Here’s something for you surrealists out there to chew on. It just occurred to me that what I’ve always imagined to be my real life may in actuality be nothing more than extended exposition for one in a series of gently derisive Samsung commercials.”