Calls from the Ghetto 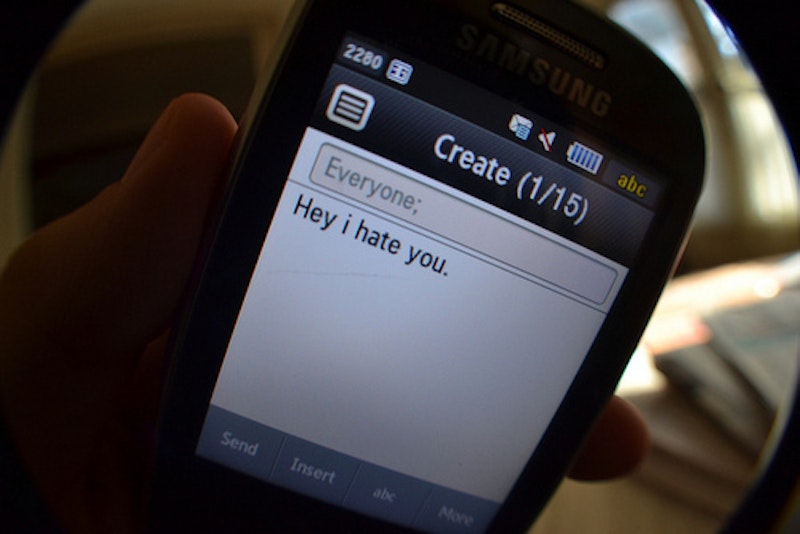 Once upon a time I had an iPhone. It was shiny and beautiful and had an ironic case that resembled a 1980s cassette tape. Then, I took my daughter to a tropical island to celebrate her 18th birthday in April, and it was stolen at the airport. Apparently iPhones are often stolen at airports because douchebag thieves know phones are in “airplane” mode and therefore can’t be tracked and found. Fuckers.

I wasn’t anywhere close to an upgrade with my phone plan, and no way was I paying $500 for a new iPhone (I’d gotten mine with the plan for $199) so I opted for a $19.99 dollar store pay as you go unit. When I got it home, it was like I had adopted a child from a foreign country. I could not speak its language. NO QWERTY KEYBOARD? How was I supposed to text on this thing? No Facebook. No Twitter. No Pinterest. I stared at it, wondering how to feed and care for it.  Where is its App Store? I was now saddled with raising a device with basic phone calls, plus caveman style texting with the “you have to press the 9 four times to get the S” bullshit. I spent a lot of time wishing my iPad was a 3G, because with the texting app on it combined with the fact that I hate talking on the phone, it’s annoying I couldn’t just make the occasional phone call on the iPad with a dorky Bluetooth thing.

Fast forward to August. I’ve had a ghetto dollar store flip phone (hello! 1999 is texting you on its non-qwerty keyboard and it wants its phone back!) for four months that seemed like four years. I was down at the dock checking the crab traps, and because I often keep my phone tucked into my bra, when I reached down to pull up a crab pot, it was a water disaster for the flip phone.

Now in need of a new phone, I decide that I’m still not spending $500 for an iPhone because the iPhone 5 will be coming out in a month so why not wait for that. I go to the dollar store and buy a knockoff Droid phone for $99, reasoning that my 14-year-old needs a new phone and I can slough this one off on her when the new iPhone comes, and at least it has a touch screen (an “iPhony” as teen would say). Perhaps needless to say, though it is supposed to be a "smartphone," it's dumb as fuck.

I had to deal with the ghetto ass dollar store phone company that matched its crappy equipment in porting my number over from the dead crab phone. They failed at porting my number and gave it to, let’s just say, another one of their customers. And since my phone didn’t work, they had to ship a sim card, so for one week I was without a phone at all. And the ghetto was given my phone number. Every doctor’s office, elementary school, and innocent soccer mom girlfriend in a 90-mile radius was now calling and/or texting a phone that was being answered in this exact manner:

My mother frantically emailed to say that my phone was stolen by a black man, because she had called and talked to him. I told her that no one stole my phone, and that it was just the phone company who had stolen my number because they barely speak English. (And yes, I recognize, acknowledge and apologize for the appalling amount of racism in those last two sentences.)

A friend of mine inadvertently began conversing with Ghetto Man because she thought it was me joking around.

Soccer Mom: “Hey are you going to soccer tomorrow?”

Soccer Mom: “Whatever, ho. I be seein’ you up in the hizzle!”

And so it went like that, for I don’t know how long. She eventually contacted me on Facebook and I informed her that my number had been given out to someone else. I texted Ghetto Man, explaining that he had mistakenly gotten my number and that my entire small town was probably all going to be calling. He said “I cain give no numer back ‘til I pay the bail, aight?” (Feeling like the two nuns in the 1980 classic movie Airplane interpreting jive, I translated: “I can’t give the number back until I pay the bill, alright?”)

Four or five more people contacted me to let me know of their phone call/text interactions with Ghetto Man, who seemed to be getting increasingly annoyed at his new exposure to suburbia.

Then, miraculously, the sim card arrived, I was able to ask for a manager at the shall-remain-nameless ghetto dollar store phone company and find one with whom I could communicate using an altered but recognizable version of the King’s English, and he was able to port my number back.

And now? It’s alternate universe world. The ghetto has arrived in suburbia. Middle of the night phone call hang-ups? Check. Texts of “were u at” and “wat up’? Check. And an argument with a jealous girlfriend? Oh hell yes, that too.

Actual Ghetto Girlfriend text: “I no you have a phone working I just called it don’t make me feel like your playing me deadass or lying to me I just called so I no its working.”

Me: “Your friend doesn’t have this number anymore. There was a mix-up at the phone company and I don’t think your deadass is playing you. He may actually not have a number at the moment. Sorry for any confusion. Peace.”

And the best part is that I can’t figure out HOW to use this upgrade ghetto upper white trash fake Droid piece of shit. Facebook and Twitter never work, I guess because the signal sucks. I don’t know how to get apps, which means no Pinstagram.

I have learned my technology lesson. You get what you pay for. Simple as that.

Well, now the iPhone 5 is out like Elton John riding a unicorn in the gay rainbow parade, so I am here to say YOU WIN, APPLE! Have your $500 (and whatever you want for an iPad mini with 3G when that shit is out, too) and give me my life back. Aight?