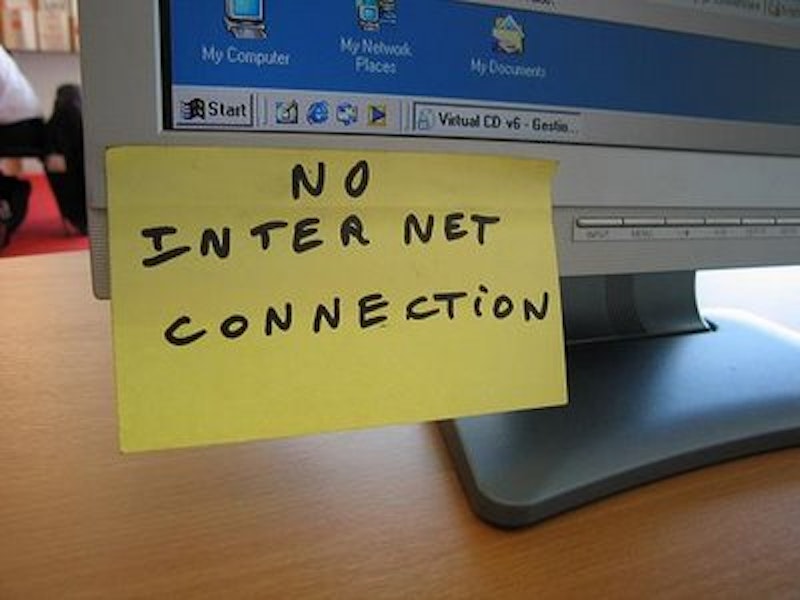 I went on vacation last weekend, and left my computer at home. I meant to stay offline the whole time, but didn't quite manage it because I wanted to set up a playdate for my son when I got home, so what can you do? Still, I didn't check email or even use the Internet for a good 48 hours there, which is probably longer than I've been offline since I started freelancing eight years ago.

So, what was it like being offline? Well, if you believe Paul Miller, who is a tech writer spending an entire year away from the Internet, it's an amazing spiritual recharging.

Without the Internet, everything seemed new to me. Every untweeted observation of daily life was more sacred. Every conversation was face to face or a phone call, and filled with a hundred fresh nuances. The air smelled better. My sentences seemed less convoluted. I lost a bit of weight.

Miller goes on to qualify this somewhat, noting that a lot of the excitement of going offline is about novelty, and that as he's gotten used to not having the Internet, he's learned that (get ready for it) he's still the same person without the Web as he was with it.

My time is no longer defined by the fact that it's spent without the Internet. It's simply my time, and I have to fill it. The luxury that no Internet has afforded me is that I feel like I have more time to fill, and fewer ways to fill it. It's the boredom and lack of stimulation that drives me to do things I really care about, like writing and spending time with others.

So being offline didn't mean I was, as Miller put it, "in the moment" wherever that might be. Instead, it mostly meant that, whatever my many other distractions, I didn't have to look for gigs, or edit copy, or deal with my blog, or write anything for a few days.

Miller admits upfront that he's very lucky to be able to go offline and get paid for it. But he doesn't quite make the link that the Web's tyranny is mostly a tyranny not of attention, but of work. The Internet for a lot of people is a way that their jobs can follow them everywhere. Certainly, as a freelancer, the web makes it possible for me to work at basically any time. For instance, I got this essay approved at five or so on Monday evening, and I'm writing it at nine p.m.

It didn't necessarily have to be like this. Romantic myths of naturalness and atavistic simplicity always cast technology as the despoiler of direct feeling, which is why the latest entertainment innovation is always supposedly on the verge of turning us into decadent artificial drones.

But the truth is that a tool is just a tool. There's no reason that the Internet couldn't give us more free time in theory—by, for example, allowing us not to commute as much, or making it easier to look stuff up so you don't have to trek over to the library and waste an afternoon doing research.

But in practice such savings are instantly erased by the longstanding American trend towards more and more hours and more and more work for everyone—or at least, for everyone who has managed to hold onto a job in our new permanent American recession. If we would like less cluttered and stressful lives, we could probably start by giving everyone six weeks of vacation like they have in Germany—which would perhaps have the added bonus of freeing up hours to hire some of those who are unemployed.

Compared to America's long-standing war on labor and more recent chronic unemployment, Miller's experiment seems rather trivial. And that's because it is trivial. The fact that someone somewhere is living without Internet for a year doesn't tell us anything about anything. Except, maybe, that the media likes stunts.