Internet Vigilantes and PostSecret: Everyone Wants To Play CSI 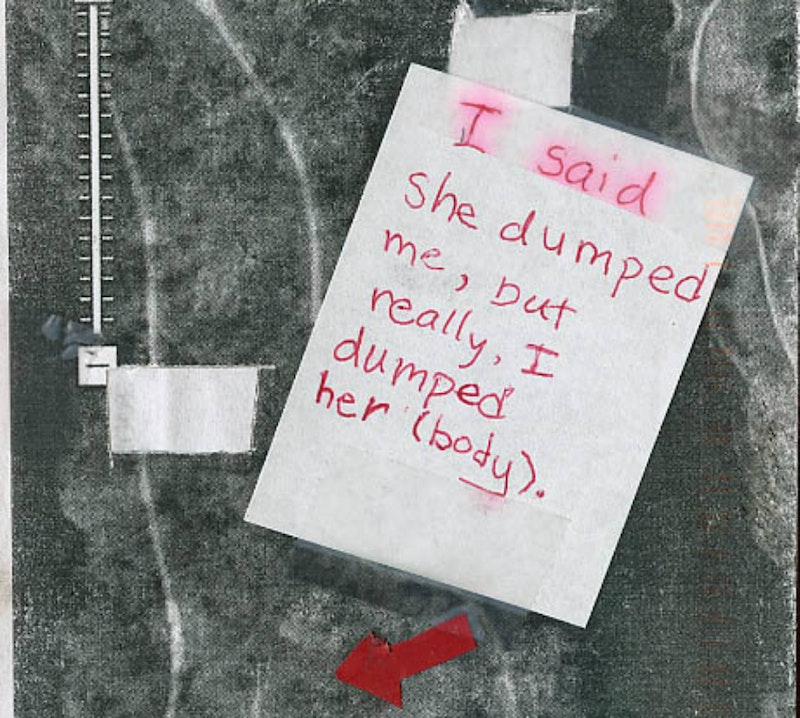 On Saturday night, Frank Warren completed his usual weekly update of the PostSecret website, a popular community art project in which fans send in postcard confessions. PostSecret is known for dealing with some pretty dark topics—adultery, suicide, eating disorders—but Saturday's Top Secret was surely the first murder confession that the site has ever published. Within hours the postcard had been posted on Reddit, and hundreds of users were busy tracking down the exact location in the picture. It was soon determined that it was Chicago's Jackson Park, and several concerned phone calls to the Chicago PD prompted a search of the area, which turned up nothing.

Whether the postcard was a true confession or just an artsy hoax we may never know. Warren told Vice that he would cooperate with the police if any investigation was initiated, but made no apologies for putting the postcard online: "In most cases, including this one, I believe it is healthy to shine a light on dark secrets… In this case, for example, maybe the secret leads to solving a crime, or reminds women that they are much more likely to be hurt on a date with someone they know than a complete stranger."

Meanwhile, on Reddit, moderators were busy deleting comments from the PostSecret discussion thread, worried about the kind of Internet vigilantism that got the site in trouble after the Boston Marathon bombings, when Redditors falsely identified a missing Brown University student, Sunil Tripathi, as one of the bombers. Tripathi's body was later dragged from the waters off India Point Park in Rhode Island, and it was unclear how or when he died—no Redditors were suspected, of course, as Tripathi went missing a month before the bombings occurred, but putting a family through such unnecessary grief is truly shameful.

Still, Internet vigilantism isn't going away, and while it is occasionally capable of great things, plenty of cases from the past few years prove it’s more dangerous than anything else. We can all applaud, for example, the work of hacker collective Anonymous in attracting attention to last year's Steubenville rape case (and the attempted cover-up by local officials), but plenty of lines were crossed. To quote Rod Dreher of The American Conservative: "But what if the activists are wrong?… Among other things, Anonymous threatens to release the Social Security numbers of all the faculty at the local high school unless the alleged rapists and the alleged cover-up conspirators apologize. How on earth does that kind of blackmail forward the cause of justice?" Or as Randy Cohen, The New York Times Ethicist put it: "Vigilante law, the lack of due process, a mob bullying an individual—I think that hasn't worked out so well… I think you can play the A-Team music, but you might more appropriately discuss the Ku Klux Klan. The history of mob violence is not a pretty one."