In Cyberspace, No One Can Feel Your Finger

On the increasing irrelevance of Facebook’s “Poke” feature. 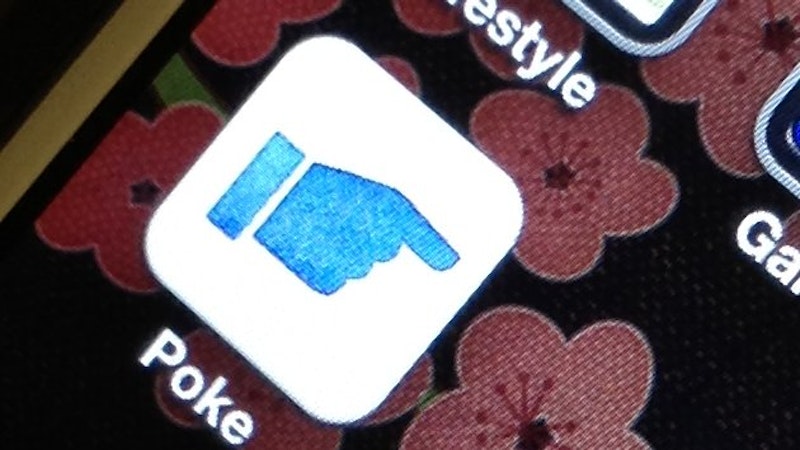 Traditions are dying all around us. The social call is on the wane, and when you find yourself embroiled in one, it can be difficult to invest much in the way of interest. Nobody writes or answers letters. I sent a few dozen Christmas cards last year, and received maybe five or six in return. Close friends can’t bother to even answer fucking texts. Now that we’re more interconnected than ever, getting and keeping other people’s attention for a few minutes is nothing short of impossible. Contextually speaking, I don’t know whether Facebook’s “Poke” feature even counts as a form of communication, but it’s definitely losing its luster, mostly because no one seems willing to truly commit to the medium for a significant period of time. Have I answered every poke I've received in kind? Yes. If I had a dollar for everyone who strung me along with 10 or 15 pokes before giving up the ghost, could I load up on groceries for the week? Definitely.

I don’t even know if you can really call it a medium, per se. It’s kind of silly and basic; you just poke people, and then they poke you back, then you poke them, and so on. It doesn't mean much of anything—it’s just something to do for fun, because you can, unless for both participants it carries a true significance, if it means “Look, I need to get your attention because we need to talk about something.” For me, it’s just, I guess, play. A former editor instituted a “Poke Friday” protocol that was great, minor fun for a couple months, then seemed to lose interest. A friend from New Mexico and I poke fairly frequently, which somehow substitutes for the conversations we never have, which is fine, because her innate negativity has a tendency to curdle my moods. But it's fun, and there's a low-key joy or jolt in the simulation of direct personal connections of a few seconds between friends or people you know only vaguely.

It’s hardly a secret that our Facebook overlords are constantly looking for new ways to manipulate, monetize, entertain, and deepen the enslavement of their captive audience. Poking strikes me as a needless distraction from the social media business at hand—a useless, faddish tangent that could be erased with minimal user complaint. It’s sad to imagine a database somewhere maintaining a record of the dozens of friends and acquaintances I’ve poked that have never been and will never be acknowledged even on a cursory, dismissive level, casualties of escalating data overloads that are essentially irreversible. There is simply too much else to absorb: calculated advertisements, IMs, dumb cat videos, fake clickbaits, oblique one-liners, wry warnings to get off the fucking Internet and live life that most of us can't be bothered to contemplate heeding.