A Defense of Internet Trolls

At least they don't repeat what everybody else is saying. 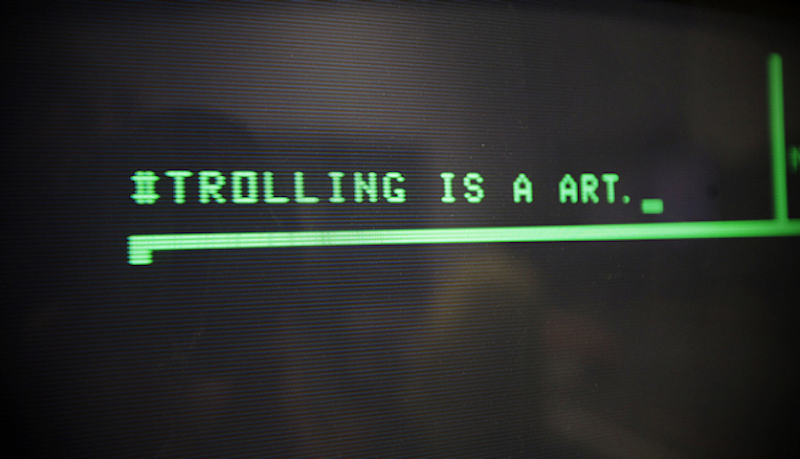 A well-established blog known as Shakesville published a post denouncing people who consider Sarah Palin stupid. Shakesville is a feminist blog, and Palin is a woman and (kind of) working class, and the Shakesville poster was simply tired of the engrained biases that allow a Palin to be held up to ridicule while a Newt Gingrich or Mitt Romney or Dan Quayle escapes all… What the fuck?

Not wanting to wade into the data that proves members of the non-Palin right do indeed get mocked, I posted a brief comment centered on what I think is the heart of the Sarah phenomenon. There are people who talk shit but at least know what the words mean, and then there are bullshitters who don't know what the words mean and who think nobody else does either. Palin belongs to that second group. A look at her Katie Couric interview establishes as much, I would think. But my point went nowhere. A tart comment flew up in response, one warning me not to attempt a thread hijack. What? The comment pointed out sternly that the post in question said the opposite of what I said. I answered that I wasn't trying to agree.

And I was banned, just like that. A few weeks passed and the same poster on the same blog had a post about Palin's stupidity.

Sometimes it's better to disagree than to agree. For most people on the Internet, that time is always. Or so I would have thought from my years of reading liberal (that is, not specifically feminist) blogs and their comment threads. The commenters crawl over each other like worms in a bucket, trying to gain an intellectual high ground none of them is capable of holding. The differences they seize on are usually tiny, though hotly contested. So it was for the rest of the thread at Shakesville. My, but they fought! Over what I'm not quite sure, since none of them differed with the post.

An Internet comment thread is like Springfield in The Simpsons. Its citizens have little reason to trust or respect each other, and mainly they don't. But when a common purpose seizes them, how they march. It's just that they don't take a look at their common purpose and see if it makes sense. They should. In theory, the point of discussion is to force such take-a-look moments. You may think you know the score, but talk to enough people and somebody will say something that does not compute but cannot be dismissed. You will gather your thoughts and look them over until you have discovered how the person is wrong. Or possibly you will discover he is right and you will change your views.

Not every troll will occasion such moments. In fact most of them don't. A troll is being snotty, and that impulse outweighs any tendency toward clear thought. But there are some smart trolls and they're more useful than the braces of chimers-in. For years I read the thoughts of the liberal blogger Matthew Yglesias and then read the comments that people attached. A much-hated wingnut by the name of Al would always be up toward the top, posting a well-crafted sentence or two that sometimes exposed the chink where Matthew's latest musings didn't match up with known fact or solid logic. The other commenters howled and snarled. But I was happy to find him, and there were a lot of right-wing blogs where I played his role—not as often, but often enough. People were repeating givens that struck me as false, and I wanted to let them know how and why they were wrong. If they didn't like it, too bad.

Was I a troll? Slang terms have such squishy definitions. I've heard that a troll is somebody who uses the Internet for purposes of being a jerk. Or, more specifically, somebody who goes on message boards to make the participants fight each other. Or, far more broadly, somebody who airs an opinion simply to make other people angry. Or somebody who does anything at all to trick another person into a reaction. Or, to get down to business, a troll is somebody who just said something you don't like. Go with that last one, and yes, I was a troll. And I'm proud of it.