Home Is Where the Horror Is 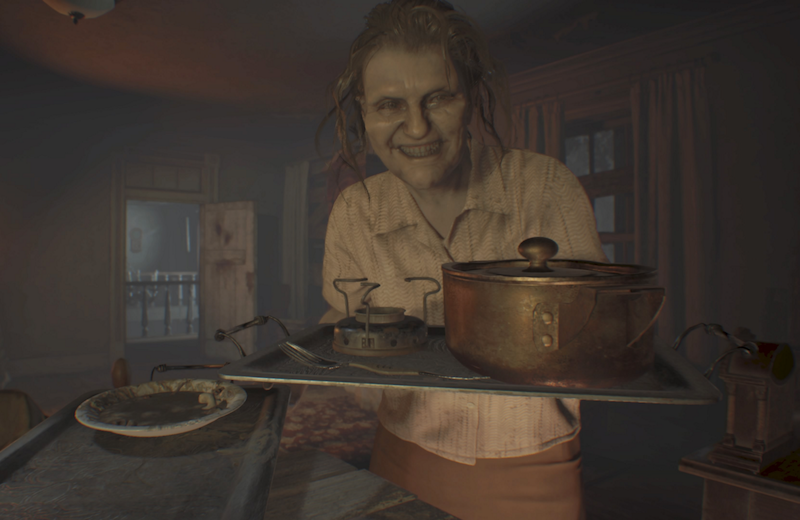 I've always preferred the Silent Hill franchise's cerebral take on horror as opposed to the visceral employed by Resident Evil. But since Konami has no idea what to do with the franchise aside from a pachinko slot machine, I was intrigued that Resident Evil 7 looked like a return to its survival horror roots. Gone were the over-the-top action sequences that were pioneered in Resident Evil 4 and went completely off the rails in its two sequels. I was happy to see an emphasis on horror and atmosphere.

What I didn't expect is the horror to come from something other than the viscera of body horror. While the game includes plenty of gore, the true moments of fear came from the protagonist's interactions with the Baker family. Ethan Winters travels to the Baker farm in Dulvey, Louisiana to find his wife, Mia. Soon after, both Mia and Ethan get captured by Jack Baker. Ethan awakes to a dinner of rotting flesh and maggots, served by the enthusiastic Marguerite. What follows is a grotesque twisting of a very mundane event: having dinner with family.

The impact of this scene is that it strays just enough to be uncomfortable, but not too far to be unrelatable. The player can easily relate Marguerite's insistence that the decaying carrion served up with their own personal disgust, remembering the time that a parent misread their personal tastes. Lucas berates Ethan, throwing a plate towards the player and rekindling moments of dinner table mischief. This is taken to its horrifying extreme when Jack cuts off Lucas's arm in response, a scene of realized fear of parental disciple. But this is normal for Lucas, he simply replies “Goddamn it, not again.” The Bakers exist in their own reality, something that looks like pure insanity from the outside.

This can be all too real when someone hears of a behavior that is tolerated or even celebrated at home. While it does not necessarily involve the loss of limbs, examining the social and power dynamics at home can instill a lingering sense of fear. It's a disillusionment of the image of one's parents as beings free from human vices, one that ossifies upon maturity and gives way to the need to escape. But this is a prospect that is becoming increasingly hard to fulfill, as the bar for independence ratchets ever further upward. It is this additional context that makes the gameplay terrifying. The Bakers are resilient and possess regenerative abilities that make direct confrontation an unwise solution. The player is often tasked with finding objects or clues in the environment that can help them proceed.

While it's easy to make comparisons with the Texas Chainsaw Massacre film franchise, Resident Evil 7 makes the concept of family itself the object of fear. This is driven home by the main antagonist, Eveline, whose desire for family consumes not only the Bakers, but over twenty victims as well. When Eveline's true form is revealed at the end of the game, involving a confrontation between Ethan and herself, she only asks “Why does everyone hate me?” with a frighteningly genuine tone.

Ultimately, Resident Evil 7 recognizes that the family can be just as horrific as a slasher with a mask. It's a violation of an ideology in American culture that still upholds the Leave it to Beaver view of family. But in a world where the reality of family often carries darker undertones that remain unacknowledged, it serves as a form of horror that isn't based on the unknown, but what is known all too well.