GamerGate reacts to a kind of toxic feminism. 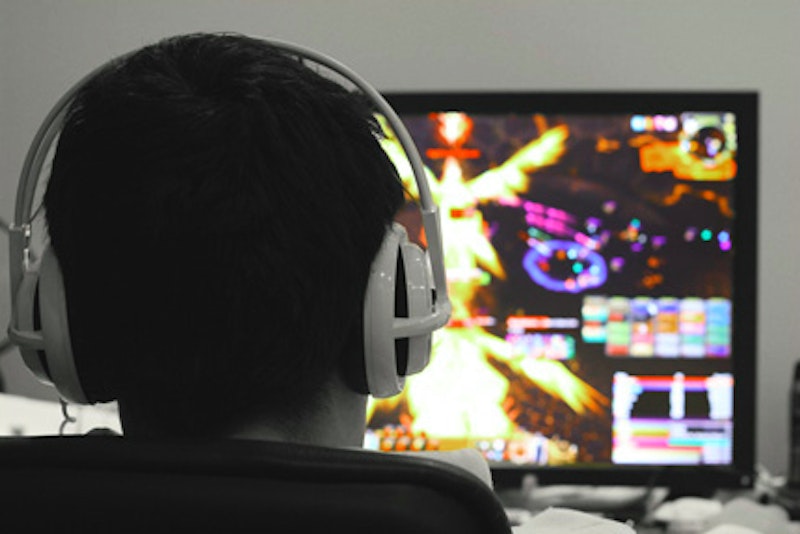 If you’re like many people, you’ve been doing your best to know as little as possible about GamerGate, the hashtag movement that is either—depending on who you ask—a consumer revolt against corruption in videogame media or a harassment campaign targeting women in the videogame world. Who wants to get embroiled in a two-month Internet drama over videogames? But this story is not nearly as frivolous as it might seem. One reason it won’t die is that it’s a battlefield in a larger culture war over issues ranging from gender politics to media bias to social libertarianism versus left-wing moralism.

In the last couple of weeks, the GamerGate story has become front-page news after highly publicized threats to two feminist critics of the videogame industry and gaming culture, media analyst Anita Sarkeesian and game designer Brianna Wu. While there is no evidence connecting these threats to any individuals involved in GamerGate, media coverage has heavily implied such a linkage. Newsweek published an analysis of tweets in the #GamerGate hashtag concluding that it is indeed an anti-female harassment campaign; blogger J.W. Caine responded with a counter-analysis arguing that the vast majority of the tweets the Newsweek reported counted as “harassment” were actually neutral mentions of women who were prominent in the controversy.

The full story of GamerGate is so convoluted it could probably fill a book by now. I’ve done some fact-checking in two previous articles for RealClearPolitics and Reason (and the Know Your Meme website has a fairly detailed chronicle).  While the various charges and countercharges are incredibly difficult to sort out, there are several ways in which the media narrative has been egregiously skewed.

Only a few journalists in the national media, such as Slate’s David Auerbach, have acknowledged that serious harassment, including threats and “doxxing”—posting a person’s private information online—have happened on both sides of GamerGate. Meanwhile, uncorroborated claims by Sarkeesian and Wu that the threats against them are connected to GamerGate have been uncritically repeated. In fact, there are persistent rumors, backed up with screenshots and chat room records, that at least some of the harassment and threats come from trolls who go after both sides to stir things up, because that’s what trolls do. To some extent, journalists have been reluctant to look into these claims because they don’t want to be targeted, but blaming the threats on GamerGate is also convenient. Meanwhile, GamerGaters’ efforts to stop and report harassment have been only rarely acknowledged. (When GamerGate members claimed to have found the man who had sent threats to Sarkeesian, anti-GamerGate blogger David Futrelle responded by accusing them of harboring some of Sarkeesian’s harassers in their midst—citing as his example a netizen known as “thunderf00t,” who has done little more than to engage in sharp criticism of Sarkeesian’s work.)

The online dust-up that eventually grew into GamerGate—a controversy surrounding feminist independent game developer Zoe Quinn—has been reduced to a misogynist attack on Quinn by a vindictive ex-boyfriend who publicized her sexual foibles and by Internet bottom-feeders who falsely accused her of trading sex for positive game reviews. In fact, as I showed in my first GamerGate piece, the Quinn controversy was a grab-bag of many issues, including Quinn’s own alleged (and fairly well-documented) attacks on another feminist videogame project.

Since then, I discovered another curious, complicating wrinkle to this story. Eron Gjoni, Quinn’s ex-boyfriend, was encouraged to go public by at least one woman in the videogame industry: former Tumblr blogger KC Vidya. She believed that Quinn’s liaisons with industry insiders and with a gaming journalist who had given her positive publicity were a breach of professional ethics, and that her behavior toward Gjoni went against her declared personal ethics as a “social justice” activist. (While KC Vidya later deleted her blog due to the backlash she encountered, screenshots of her posts still exist.) Ironically, a line from one of KC Vidya’s posts was quoted in a Vice article as an example of things “males” have said about Quinn; at least in that case, the magazine later amended the wording and posted a correction.

With few exceptions, GamerGate has been portrayed as a group of aggrieved white straight males who don’t want women, gays, and minorities on their turf—even though female, gay, transgender, and minority gamers are among the movement’s most passionate supporters. Pro-GamerGate pundit/scholar Christina Hoff Sommers has been dismissed by detractors as a right-wing faux feminist (in fact, Sommers is a moderate, pro-choice registered Democrat). But the movement has also received at least partial sympathy from self-identified liberal feminists such as New York comedian/writer Sara Benincasa and Canadian journalist Liana Kerzner. Kerzner has had her conflicts with GamerGate but has lately found herself closer to the “pro” camp, partly because of what she sees as unfair media coverage.

A part of GamerGate’s image problem is its own identity problem. While the movement’s concerns about cronyism in “elite” gaming journalism (represented by sites such as Kotaku, Polygon, and ArsTechnica) and its rather incestuous relationship with the “progressive” indie development scene are definitely not without foundation, the “ethics in journalism” arguments are often somewhat vague.  It’s also hard to sustain the argument that GamerGate is not a backlash against feminism when it finds itself conspicuously at war with feminists on and around the gaming scene; indeed, the gamers’ complaints about gaming media collusion are often directed at the promotion of a feminist agenda.

But this backlash is not directed at women, who are already a strong presence in the gaming world. (Today, more than half of role-playing videogame players are female, as are a third of those playing in massive multiplayer online games.) Nor is it directed at female-oriented content in videogames, where female protagonists—or ones whose gender can be customized by the player—are hardly a rarity. Its target is a narrow brand of feminism that not all women and not all feminists espouse—one that does not simply champion equality and inclusion, but sees modern Western culture as permeated by patriarchy and views male “sexualization” of women as inherently oppressive.

GamerGate has been attacked over anti-feminist comments made by some of the movement’s sympathizers, such as provocative British tech blogger and Breitbart writer Milo Yiannopoulos. But far less attention has been given to extreme views on the anti-GamerGate side. Take writer Samantha Allen, whose decision to stop writing about videogames, apparently because of GamerGate, has been lamented by Brianna Wu as the tragic loss of a valuable voice.* A few months ago, Allen posted (and later deleted) a diatribe on her Tumblr blog that opened with this declaration:

(It’s all downhill from there.)

Obviously, Allen does not express such attitudes in her published work; but it is surely not a stretch to think that they inform her journalism.

In his GamerGate commentary, blogger Andrew Sullivan notes that the movement was partly a revolt against “the creeping misandry in a lot of current debates… and the easy prejudices that define white and male and young as suspect identities.” I disagree with some of Sullivan’s writings on gender, which come too close to a “Men are from Mars, women are from Venus” view of intractable sex differences; but in this case, his insight is on target. This misandry expresses itself not only in many feminist critiques of videogames (which I discussed in some detail in my second piece on GamerGate), but in a climate that treats male sexual expression—and even harmless humor that could be interpreted in a sexual way—with suspicion and disapproval.

In this climate, a man’s quip, “Relax, it will be over soon” to a woman during a videogame demonstration can spark an outcry over a “rape joke”; a male game designer can be vilified as a misogynist for casually joking in a pre-Valentine’s Day interview that men could earn sexual favors by introducing their girlfriends to his new multiplayer game and letting them win; and a programmer can lose his job over an overheard childish joke about a “big dongle” at a tech conference. A leading videogame publication can criticize a game maker for insisting on his innocence of a rape accusation made on social media rather than admit that he might have inadvertently violated his accuser by not seeking explicit consent.

None of this negates the fact that male chauvinism exists in the gaming community. But to fight it by stigmatizing maleness is exactly the wrong approach, and a way to alienate not only men but many women as well.

The feminism of male demonization and female victimhood has become an insidious force that, despite its faux-progressive trappings, stands in the way of genuine equality. Whatever its flaws, GamerGate is a politically diverse movement of cultural resistance to this brand of toxic feminism. For that, it deserves at least two cheers.

*UPDATE: I have received an email from Samantha Allen saying that she quit writing about games in late June or early July "after a separate harassment campaign on Twitter, long before the formal start of GamerGate." I will note that Brianna Wu's column in The Washington Post clearly named Allen as one of the female videogame writers "lost" to GamerGate.