That Literary Jerk and His Hair Sock

A hard look at the Internet's latest sensation. 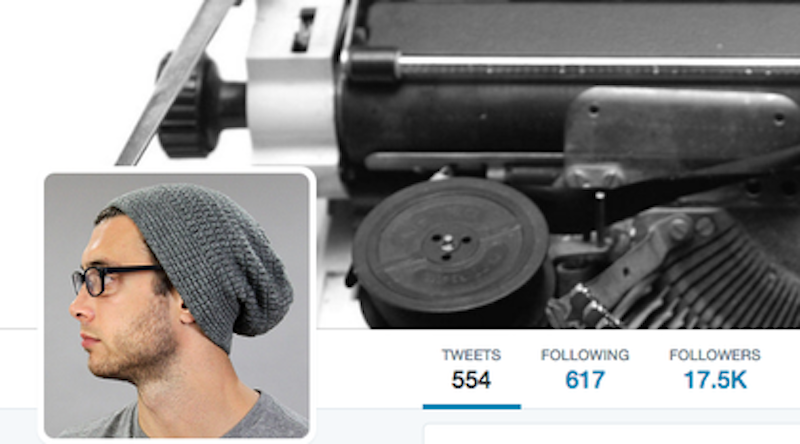 There's a new jerk delighting fans on Twitter. His handle is @GuyInYourMFA and he takes his work seriously: “I only write literature. Leave 'thinkpieces' for those who can't create truth from fiction.” He experiments: “My next piece has been written entirely in fourth person omniscient. Present tense.” But he's read a lot of old war novels: “The soldier looked down at the face of the dead German—so young, still a boy—and sighed. '10 miles to camp,' the captain said." In fact, he can sound like any bad writer: “Autumn is my favorite season. The chilled air and falling leaves remind me of my own mortality.”

The little photo next to his Twitter name shows a douche with his profile pointed sharp at the horizon. He has glasses and stubble and a sort of big sock that goes over his hair. You can't see it here, but he carries a moleskin notebook and likes to spend weekends around campus, just observing. He won't use a computer, just a typewriter, and he puts in time there: “A businessman thinks he's going to be fired. He doesn't get fired. 642,200 words.” And: “The protagonist reminisces about his childhood sweetheart, 241,000 words. She represents innocence.” You'll notice that he tends to overrate his originality: “My protagonist might be in a mental institution, but it's Society that's truly insane.”

Definitely do not date him: “Idea: bitch ex-fiancé begs protagonist to take her back. He doesn't because he's become so self-actualized.” He doesn't think much of women, and he's not aware that's the case: “For some reason, I found Middlemarch more compelling before I knew George Eliot was a pen-name.” Plus, he's condescending (“@jk_rowling congrats on the popularity of your books. I mean, I think my target audience is less 'mainstream,' you know?”) and a reflexive purist (“Shouldn't the TV show be called  'A Song of Fire and Ice'? I only know that because I skimmed those books on an airplane once. Skimmed.”) And that typewriter can be a pain: “The ringing clack of my typewriter is really adding to this coffee shop's Nora Jones ambiance music.”

As the man himself might put it, Guy in Your MFA strikes me as a good Twitter creation but not first-rate. Some of the same jokes surface many times, and he's all over the place when it comes to literary shittiness: crappy James Jones to crappy Nicholson Baker to the crap would-be writers send the community paper. The audience for the Tweets is so happy at seeing Guy get mussed up that they don't care what he's hit with. That one about society being insane, that's old even as a joke about the sophomoric.

Where the character doesn't wobble about is his habits. He isn't the sort of shit writer who procrastinates; he's the sort who overproduces and expects you to read it. He isn't the kind of douche who wants to trip you up over race and sex nomenclature; he's the kind that the first sort of douche ought to hassle but doesn't, the sort who genuinely thinks his demographic is the one and only and everybody else has been added on. That theme gets rung home again and again. Personally, I can see someone with Guy's glasses, stubble and hair sock being a real bear about other people's multi-cultural or multi-gender missteps. But the Tweets are insistent about Guy's entitled guyness, his dick-heavy self-importance. It does take a certain commitment to the production of gloze to pump out such creamy word masses on so little provocation: “14 pages describing her light, quivering fingertips grazing my skin, then another 116 describing the sheen on the cocaine we did.”

Guy in Your MFA doesn't aim for the highest targets, and it is sometimes ham-handed: “Writing a book about class struggle based on personal experience. I have to wait another 8 months to upgrade my iPhone #ugh” Really, I guess I gravitate toward more textured, closely observed brands of satire. But Guy does work on a certain level. Anyway, I was on an airplane.