Formspring.me: Breaking us down one horrible question at a time

For all those willing subjects of abuse out there... 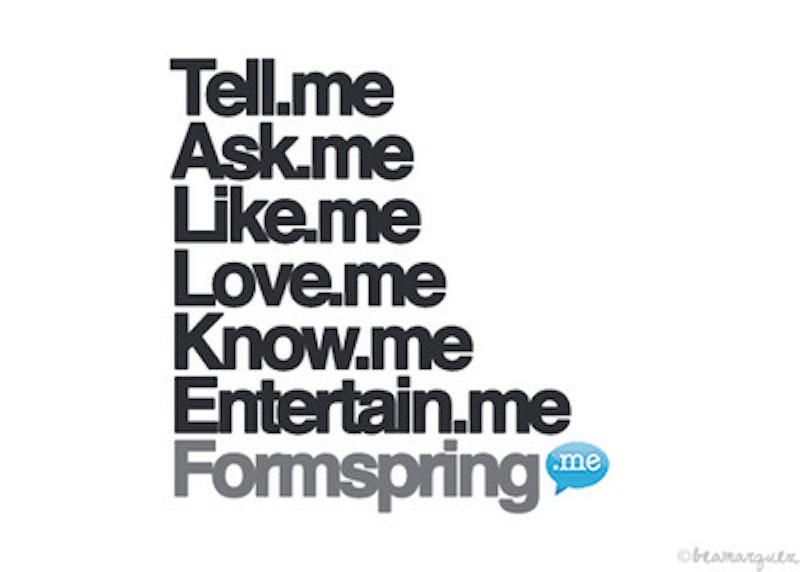 I have a close relationship with less than a quarter of my Facebook friends, and as a result I’m exposed to a flood of useless information regarding people I don’t really care about on a daily basis. Walking through the halls at school, it feels as if I know a lot of my peers better than I actually do, simply because of their active Internet presences.

Sharing “friendship” on the Internet with people you don’t really know can produce hilarious results, and often does. A group of friends and I started a private inbox “thread” (dubbed “The Thread”) about a year ago to document the best of Facebook ephemera. Some people reveal way too much about their personal lives on the Internet, and this tendency has only skyrocketed with the proliferation of FormSpring.me this year. For the uninitiated, FormSpring is a social networking site that allows users to make accounts and receive anonymous questions from anybody. Realize that this is a primarily teenage user base.

Most girls (and it is mostly girls) that jump on the FormSpring gravy train jump right off when they start getting really nasty questions. But some persist, and this is what I find fascinating about the site. Many of these accounts consist solely of both violent and sexual threats and complete unrestrained hostility. These girls rarely get any sincere questions, and spend most of their time on the site defending themselves from gossip. And yet, they keep on.

FormSpring presents such a strange equilibrium: teenagers who voluntarily put themselves out there, get trounced via anonymous text, complain about it, and continue answering questions despite the fact. One is not required to answer, and publish to the world, a question asked on FormSpring: it’s entirely optional, and it amazes me that people stay on the site and even acknowledge the sheer white hot hate that comes at them, only perpetuating it further with coy and intentionally unsatisfying responses. Obviously, some people just crave attention. But FormSpring is like the Internet's version of stoning: why would anyone want to opt in to a service like that?

Honestly, I don't find it surprising at all that someone's already committed suicide because of this shit. FormSpring brings out the worst in people: without fear of repercussion, people say terrible things just because they can. I don't understand why anyone would put up with it; after all, who really wants to know what a large, anonymous group of friends/acquaintances/enemies think about you? But FormSpring will continue to exist as long as there are insecure teenage girls who crave nothing more than to be pissed on, spat at, humiliated, and most importantly, talked about in the public sphere. Attention is attention.