Uber-assholes and the pathetic preppers of Silicon Valley. 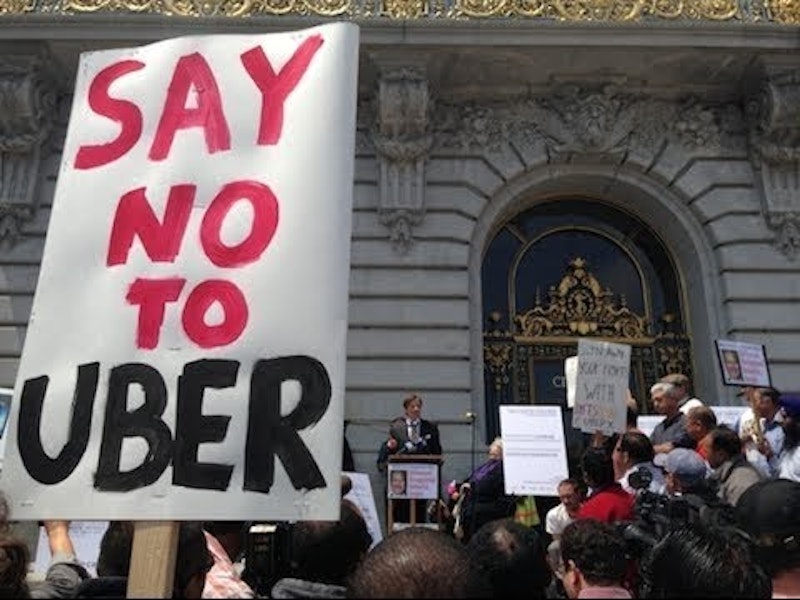 I couldn’t be happier that #DeleteUber is trending all over the country after they scabbed at the JFK protest: “Uber also was criticized for charging less than it could at JFK Airport in New York City as taxi drivers had halted service for an hour on Saturday to protest the ban. The move was perceived by some on social media as an effort to profit off the protests as more passengers would need to seek alternatives to cabs. But the company said on Twitter that it had not ‘meant to break the strike.’” Oh, please. Uber knew exactly what it was doing, and it has a history of exploiting customers and workers. The idea of surge pricing is insane, and I’ve felt a bit like Mugatu for the past few years watching earnest liberals and leftists discuss issues consonant with labor while waiting for their Uber. Finally they’ll get the shit they deserve. Lyft may have donated one million dollars to the ACLU yesterday, but they’re still unregulated (and funded by Peter Thiel). I’ll install the app as soon as they unionize.

I’ve been suspicious and hostile toward the ride-sharing economy ever since it popped up in 2014: All of a sudden, friends of mine who’d never consider calling a cab in Baltimore City (or didn’t know you could) were all over Uber, venture capitalists putting a shiny logo and a cute app on something that’s existed for decades: hacking. But now, every white person who locks their car doors as they drive down Greenmount Ave. will happily enjoy a more innovative hack, funneling more money to Silicon Valley robber barons. Silicon Valley loves the President, by the way—forget bootlicking, these guys were eager to eat Trump’s ass: “Immediately after Trump seized Election Day, CEOs yearning for a friendly tax repatriation policy lined up to wish him the best, tentatively supporting the new president in tones of Well, let’s just wait and see, while some offered their services to the man directly. Oracle CEO Safra Catz, Uber CEO Travis Kalanick, and SpaceX/Tesla CEO Elon Musk all have formal advisory positions with the Trump administration.”

Musk oughta be spanked for this pathetic tweet: “The blanket entry ban on citizens from certain primarily Muslim countries is not the best way to address the country’s challenges.”

I’m not too worried about the meek inheriting the Earth: showing what true cowards they are, Silicon Valley is expecting and preparing for the apocalypse, spending millions of dollars on private airstrips, helicopters, guns, motorcycles, bunkers, laser eye surgery, protein pills... the list goes on: “One member, the head of an investment firm, told me, ‘I keep a helicopter gassed up all the time, and I have an underground bunker with an air-filtration system.’ He said that his preparations probably put him at the ‘extreme’ end among his peers. But he added, ‘A lot of my friends do the guns and the motorcycles and the gold coins. That’s not too rare anymore.’”

Another hilarious excerpt: “‘What if someone comes and takes this?’ he asked me. To protect his wife and daughter, he said, ‘I don’t have guns, but I have a lot of other weaponry. I took classes in archery.’” Good luck fending off savage hordes with a bow and arrow, you nubbin. It’s telling that the Philosopher Kings of the United States are spending so much time and money preparing themselves for the end of the world instead of trying to prevent it in the first place. “‘I think people who are particularly attuned to the levers by which society actually works understand that we are skating on really thin cultural ice right now.’” Throw some money at it, then! Build roads and dedicate libraries before anyone else. Stop with the rockets for a second and get us a cross-country high-speed rail.

Why would anyone want to live in a post-apocalyptic world anyway? Granted, these people have so much money and power that they’re already obsessed with immortality, but wouldn’t the fabulous life disappear as soon as you needed a motorcycle, five guns, and some gold coins? You and your kids are going to live in a cush bunker for a few years before you run out of supplies and start roughing it like its The Road? If society collapses, why stick around to hash it out in huts with sticks and guns? There will be no Wi-Fi for them, no more GoPros to show the world how well they can ride and shoot. In a violent revolution, the rich will wither in their bunkers and circle on their runways forever. No more wildly imaginative professional creative innovation for them.