When your car bumper is saying a dozen things at once, is it saying anything? 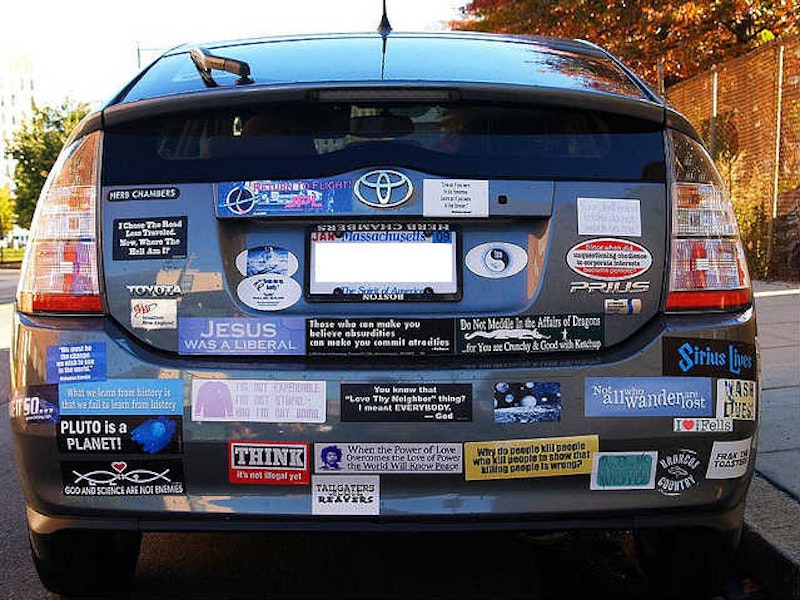 Personal expression is a funny thing. Among the handful of bumper stickers I flaunted as an undergraduate was this gem: “I’M ONE TOO.” I don’t remember where I found it, what induced me to buy it, or what I sought to accomplish by affixing it to the rear end of my 1986 Volkswagen Jetta, but it certainly stopped folks in their tracks. It was a puzzle friends and strangers felt compelled to attempt to solve; subsequently, a great many concerned looks were directed my way. People caught the meaning, or thought they did, or resented me for skewering their concept of what a bumper sticker should be. All of which suited me fine: I was a militant nonconformist—and a philosophy major. Mind you, I’d grown up around motorists for whom “My other car is a broom” or “Don’t blame me, I voted for Bill and Opus” were standard-issue profundities: loony leftist Wiccans whose jalopies seemed to be held together by anti-Christian one-liners. (Anarchist punks share at least one bad habit.)

Communicating political dissatisfaction or disaffection via a plethora of hastily printed slogans guaranteed to alienate half of the people at least some of the time remains a national pastime. What interests me is the utter meaningless—the purposeful futility—that underlies this type of communication regardless of what ideology one subscribes to; it’s like going on a cable news talk show and badmouthing the host for five minutes before saying anything of substance or worthy of consideration, or hammering a dozen messages home within your allotted 60-second airtime without explaining why any of those messages are important or why anyone tuning in at home should care. Cramming 16 bumper stickers together effectively nullifies all of them, because when I’m stuck in traffic behind someone so determined to project a combative sense of self, it’s impossible for me to absorb that much truncated rhetoric at a glance, with the effect being that, bizarrely, I wind up with more respect for a Ford F10 truck-piloting GOP tool with a “How’s All That Hope-y Change-y  Stuff Working Out For Ya?” sticker and nothing else than for some lady with 20 not-so-clever variations on “U.S. out of my uterus” doting her ancient Volvo. Echo chambers are terrible places to define beliefs, let alone take tentative steps to building bridges, but maybe, given the rising rate of traffic, our polity would be better served by car bumpers that inspire contemplation as opposed to ire.