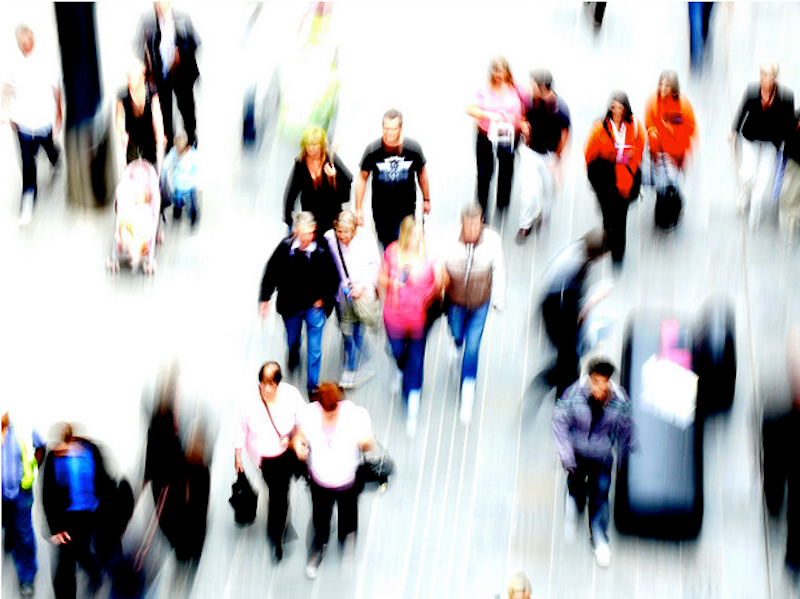 In a few minutes I will ask you to make a choice. It will not be the sort of choice that will say much about you as a person or the kind that will influence any other choice that you will make later today or tomorrow or the day after that one. The proposition has to do with assignment—or a lack of assignment—and there is not a better moment to muse on assignments than on a Southwest Airlines flight from Orlando to Providence.

Imagine that you board this flight. Pleasant and plasticy flight attends guard the door of the plane. They linger in the galley, and their mouths move. You cannot really tell if they are talking to each other or to you, or somehow in greeting you in a particular way they are actually communicating to one another in a secret stewardess language. You pick up your carry-on bag and take care to not smash it into the shoulder of the grandmother leaning into the aisle or knock the hat off the little kid sitting across from her. There are two seats left on the plane.  Both are middle seats in row 37.  Each window seat is occupied by a generic business type. The aisle seat on the left is filled by a twenty something gal wearing a black tank top and a straw beach hat.  She has a jean shorts and pink flats and looks mildly sun burned.  Under her seat is a wire cage with a tiny dog that appears to have been rescued from some sort of shelter.  She has two copies of People magazine and a paperback copy of The Hunger Games tucked into the seat pocket in front of her.  She does not look at you while you deliberate. To the right is a man who looks to be about fifty five years old.  He is moderately obese and does not have much hair.  His scalp is also sun burned. He has on an old black tee shirt and jean shorts.  He wears flip flops and does not have the arm rest down between his d-shaped stomach and the middle seat. The man does not have any reading material. He smiles at you and turns his legs to the side for you to slide by him and sit down.

What seat do you choose?

The process of decision making today seems has been saturated with input. Sometimes it comes in the form affronting bombardments. Go to the Black Keys concert because four of your friends are going. Watch the Kony video and make sure everyone else knows you watched it. The most interesting men drink Dos Equis when they drink beer.

Social media and its potential to monetize hinges upon understanding the influence of our peers and leveraging it to drive our decision making. This is hardly news but people have a knack of pushing back; a certain independent instinct could create a situation where we cannot trust our decision making is ours any longer.

Jennifer Egan creates such a world in last year’s Pulitzer Prize winning novel A Visit from the Goon Squad. In the novel’s closing chapter, Egan creates future not far ahead of today where the individual’s social influence is simply marketing. People’s friends, spouses, and children each have been spit through complex marketing algorithms and measured for influence. An individual’s influence can be bought. Vitamin Water no longer has to shell out the major dollars to 50 Cent; they merely have to buy off your friends at a much lower rate. As a result, trust disappears; in the same way that no one really believes 50 Cent particularly enjoys Vitamin Water, or any other sort of water, in the first place.

The major goal of the marketer does not change though. People are made to believe major concert swells up organically and they are meant feel that their participation in it is a penultimate show of free choice.

Mad Men reinforces this omnipresence of influence and informs its audience that this is the way that it is, was, and forever will be. For the people on Madison Avenue, Don Draper must seem like the antichrist in a grey flannel suit. He harkens back to the day when subtleties and subliminals were enough to make a buck. Draper does not give up-and-coming copy writers an archetype to resurrect; on the contrary, he gives the average man, the consuming farm boy that lives in his heart, a peak at men hell bent on destroying our power to choose.

But back to the plane.

The choice is no choice at all. One hundred times out of a hundred I would have chosen to sit with the pretty girl and her dog and her People magazines. On any other airline the choice would have been made and I would have ended up saddled next to the old guy and his poor manners. Larry David is plagued by his neurotic hemming and hawing, but he lives by a stand fast rule.  Never, under any circumstances, sit next to a man on a plane who is wearing shorts. Just don’t do it.

Then again, that is a rule, not a choice.