You're a tasteful luddite who wants something impractical-yet-cool on which you spend your disposable income. Here's where to start. 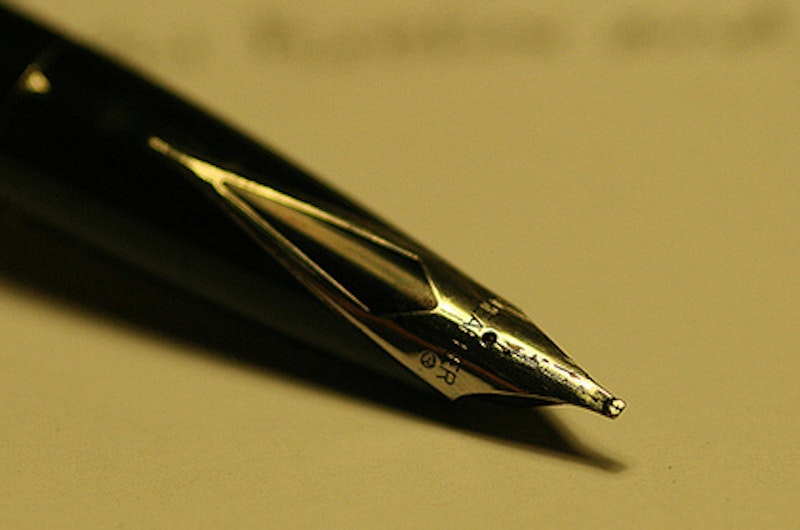 Why would anyone want a fountain pen in 2008? It won’t make your handwriting look like the Declaration of Independence. It won’t get you hired or promoted, and it will never, under any circumstance, get a woman to sleep with you (a man, maybe, though he will likely be bearded). Fountain pens are, however, pretty fun to write with—they glide across the page with very little pressure. Online fountain pen experts delight in reporting that this decreases wrist pain and finger cramps caused by ordinary ballpoints. But if you write enough with a ballpoint to cause wrist pain you might be more interested in one of these new technologies called “keyboards” or “anger management” than in a superior pen.

Fountain pens also offer a chance to tinker with your pen, almost limitlessly. This is key. Fountain pens are the bicycles of the fine writing instrument world—you can actually tune them and maintain them and work on them yourself. To be totally honest they don’t really need to be worked on; fountain pens were invented in the late 1800s to replace quills, an antiquity everyone was really sick of fucking around with, and they were intended to be written with, not tooled and perfected. The design hasn’t changed all that much since then, but if you wish you can spend a good deal of time rinsing, flossing, and waxing your fine fountain pen. This is more fun than it sounds, but not much more fun.

At the most basic level a fountain pen contains a reservoir for ink, a writing point (usually called the nib, usually made of gold or steel), and a feed that delivers ink to the point through capillary action. Some modern fountain pens also have jewels and gold and incredibly bad artwork on them; one notorious model includes a synthetic fragment of Abraham Lincoln’s DNA. There is a big collector’s market for fountain pens, so many companies release “limited edition” pens that sell for hundreds or thousands of dollars. These range from the tasteful, like Montblanc’s homage to Marlene Dietrich (the clip echoes the shape of a man’s necktie), to the grotesque, like Krone’s Sigmund Freud (which features a Franklin Mint-quality miniature painting of Dr. Freud surrounded by naked, spectral odalisques), to the scatological, like Montegrapps’s ill-conceived “Cigar Aficionado” pen, which looks like a large plastic turd.

Here is the dark secret of these pens, and of all modern luxury pens: most of them write no better than any other fountain pen. You can get a fountain pen for $15 that will write just as well as a $500 Montblanc or S.T. Dupont. In fact, while I am betraying the recondite brotherhood of pen fanciers, why don’t I go a step further and tell you the second dark secret? Most modern pens are demonstrably inferior to so-called “vintage” pens produced from the mid-1930 through, say, the 60s. You can get a simple Esterbrook from the 50s that writes more smoothly and reliably than a massive, bejeweled Cartier, and you can probably get the Esterbrook for $20.

It’s not all that surprising that modern fountain pens compare unfavorably to their predecessors; after all, nobody really uses fountain pens anymore (except, apparently, in India and China, where they mass-produce excellent fountain pens in great variety). The companies make fewer pens and have focused, broadly, more on luxury than on writing. Where you see this most plainly is in filling mechanisms. Lovers of vintage fountain pens relate to filling mechanisms the way that most people relate to the genitals; they are the hidden delight at the heart of an object of desire.

Let me explain: most fountain pens fill from bottled ink. Over the years pen manufacturers came up with quite a few ways of doing this. The first fountain pens filled by eyedropper, a technique which shows an admirable thrift and simplicity but which was clearly not good enough for the 19th century pen nerd. Shortly after came lever filling, which may be familiar to those of us who grew up watching Warner Brothers cartoons in which people regularly squirted one another with ink. After 1940 the pen industry entered its baroque period, introducing, for instance, Sheaffer’s “snorkel” (which has achieved a cult status as history’s most complicated pen filling method), and Parker’s rather unsuccessful capillary fill method (you simply set the pen in the inkwell and walked away—this caused problems if you ever wanted to change ink colors). Eventually disposable ink cartridges swept all this innovation away.

Cartridges have no moving parts and can be swapped out without resorting to bottled ink; most modern fountain pens use cartridges or “converters,” modified cartridges which draw ink up like a small syringe. Converters are not built into the pen and can be replaced instead of repaired (the US, in case you were wondering, has only a handful of expert pen repairmen in business). So a modern fountain pen is actually simpler and less technologically refined than a pen from 1950, and in many cases the mid-century pen will write as well and cost less. The German pen maker Pelikan still makes an excellent, reliable piston-fill pen, the only modern pen which I would recommend, though even Pelikan produces an array of extremely expensive pens that are quite plainly just dressed-up versions of its more workmanlike offerings.

So let’s say that you want to buy a fountain pen. Many pen lovers seem to think of the bond between writer and pen as something mystic, like they are a fat, waddling King Arthur and the pen is Excalibur decorated with tacky Japanese engravings of carp; these people are, needless to say, retarded. It’s a damn pen. So instead of encouraging you to follow your heart I will simply recommend what to get. If you want to spend some money get a Pelikan m200. It should come in between $70 and $100. It comes in every conceivable point size. If you are diligent and unimaginative you can write with this pen for the rest of your life. Get a bottle of Waterman blue-black ink for this pen or the pen below (neither one accepts cartridges).

If you want to spend less money but still get a legit fountain pen, go for the Hero 329, a Chinese knock-off of a famous Parker pen from the 1940s. This should cost about $15, and it has the advantage of looking pretty much like a ballpoint so you won’t have to explain your stylographic perversion to your colleagues. On the cheap, get some disposable Pilot Varsities. You can find them at virtually any office supply store, and they’re usually about $2 each. It continually mortifies the pen world that the Varsity writes pretty much as well as pens that cost literally thousands of times its price.

If you want a vintage pen I wish you luck; the vintage pen market, which involves unbelievably tawdry pen conventions, is tough to navigate for a neophyte. Lots of people sell vintage pens through eBay, and most of the time they are legitimate but need repair (unlike eBay Montblancs, which are overwhelmingly fake). Probably the best fountain pen in history is the Parker 51, which can still be had in some permutations for under $100. The Sheaffer Snorkel and Esterbrook J series are also well regarded and generally reliable, as are Parker’s beautiful Vacumatics from the 1930-40s. Vacumatics will almost invariably require restoration before use; this can be relatively expensive and takes a long time. You can sometimes find 1910-1920s lever fill pens in black hard rubber for very little money – these pens often have flexible nibs, which will let you pull off some pretty cool shading if you happen to be proficient in 19th century clerk’s script. The flex nibs are also remarkably easy to ruin and the hard rubber pen body will dissolve in water.

I don’t wish to dissemble: any money you spend on fountain pens is money wasted. If you want to write a novel, use a laptop. If you’re writing a shopping list, use a ballpoint. If you want to escape the anomie of this post-postmodern life join a cult or get a piercing; the fountain pens will not save you or make you unique. But if you want to waste some time and effort on a kind-of neat thing to write with, then definitely go with a fountain pen.