For those of you who are into this kind of thing, here's what to expect from the world's silliest industry in 2009. 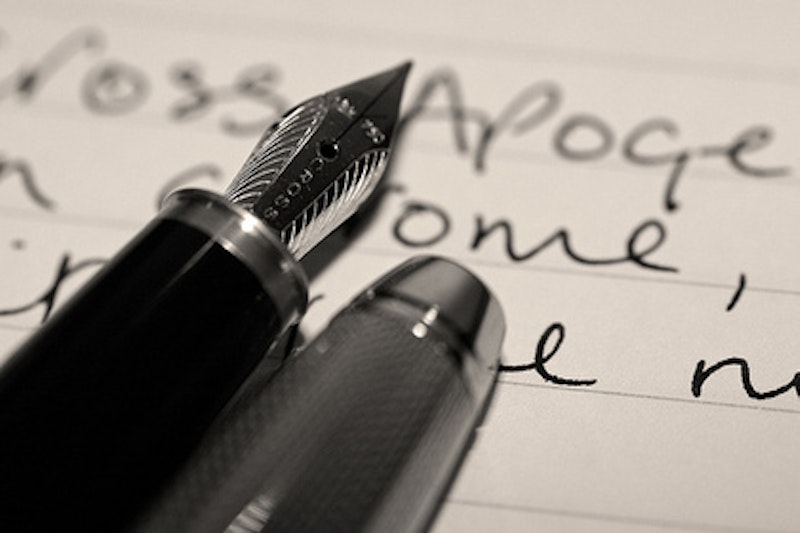 The 2009 Fountain Pen Hospital catalogue is here, an event which never fails to remind me of the parade of obscenities that the narrator of Lovecraft’s “The Festival” witnesses.

Visconti – The catalogue starts with Visconti’s horrible Bible pens, one for the old testament and one for the new. Featuring Visconti’s incredibly complicated “power fill” system and decorated with Franklin Mint quality engravings of Bible stories (old testament gets David and Goliath; New Testament gets the Last Supper), these pens are a great way to communicate succinctly the twin ideas that you like the Bible and that you have horribly bad taste. Christian version is $4250, Jewish version, for you, only $3400.

They also offer their Ragtime 20th anniversary limited edition, a celluloid pen that reproduces the look of the accommodation clips seen on early hard rubber pens and the twin gold bands most famously featured on the caps of Parker’s Vacumatic. Confused, but not unduly ugly. The line’s dependably attractive Wall Street and Van Gogh pens are back without any unnecessary tampering. Visconti’s monstrously stupid traveling ink pot has gone up in price to $105 retail, which is surprising given that most people buy ink in a glass container, not just poured into their cupped hands.

Montblanc – This formerly respected pen maker continues its transformation into a vendor of schlock jewelry. Once you get past the key rings and belt buckles the pens seem like an afterthought. At $750 their typically boring 149 looks positively thrifty next to some of the more bizarre limited editions, and their Starwalker collection continues to innovate in looking cheap for a sky-high price. The Starwalker has a transparent plastic (or in Montblanc terminology, “precious resin”) end cap with the Montblanc snowflake floating in it. I don’t think anyone anywhere has figured out how to make clear plastic look luxurious. They’ve also fielded a passel of ugly metal Meisterstucks about which the less said the better.

Montegrappa – This year, as previously, Montegrappa is all about pleasant but surreally overpriced classic Italian celluloids. Celluloid is of course another word for “plastic.”

Omas – Here’s a quite lovely brown sunburst celluloid in their Paragon and Milord bodies for well over $1,000. For $1,000 even I would opt for a much less expensive pen and a selection of brown color swatches from the paint store. Omas is still pushing the silly Emotica line of rubber-coated, high-tech looking pens. These feature a clip that splits in two in order to form a kind of easel for the pen, answering a design problem which most certainly does not exist. They also include Omas’ famous titanium nib. Unfortunately it’s famous for writing poorly and feeling very strange on the paper. Their $2,500 phoenix pen rounds out the collection and looks like you could exchange tickets for it a Chuck E. Cheese’s. Pen makers, not just Omas, are always looking for events or concepts to commemorate, and they generally want to pick things that are both well known and inoffensive, like the phoenix. The resulting designs are unsurprisingly bland and often ugly, but rarely quite as ugly as this Technicolor monstrosity.

Waterman – They’re trotting out new colors of the square-bodied Exception, a pen which I have always found slightly ungainly. The futuristic looking but actually quite old Edson plods on. It featured an inlaid nib—the nib extends directly from the pen’s body instead of sticking out of the section. Waterman started out as a US-based company and opened a subsidiary in France. The US branch folded many years ago, and now the French part of the company is the sole owner of the name. So let’s all give them permission to start calling the Edson, which was named after American Edson Waterman, something else. Edson is a helluva dorky name.

Parker – Their line is stripped down to the Duofold and Sonnet. Gone is the 100, their giant metal “51” replica. The Duofold and Sonnet are both great pens, but it’s sad to see this once innovative company shrunk so small. Note that you can probably get an 80-year-old Duofold for about the same price as some of the fancier modern homages that Parker offers currently.

Krone – Amusing as always, featuring some of the tackiest pens I have seen in a very long while. Lots of them are marked with the Krone name or crest, screaming out a brand that no one has ever heard of outside of nerdy pen circles, and those who have heard of it in these circles hold it in starkest contempt. Perhaps the ugliest collection of pens in history. The Krone I had (a sober jet-black piston filler called, delightfully, the Stretch Panther) wrote very well – go figure.

Pelikan – I happen to like Pelikan, but there is nothing here that we haven’t been seeing since the 1950s. Very conservative, for people who do not want to have a long conversation about their pens, which I think is nice. This collection unfortunately maintains the trend that their $70 pen looks pretty much like their $700 pen. They’ve also introduced the Pura, an uninteresting student-pen looking aluminum number.

Monteverde – Good lord these pens are ugly. Monteverde makes a very good pen, but these are just unspeakably tacky. The Artista Stripe collection uses some unbelievably complicated and labor intensive process to end up with a pen that looks like it was made out of recycled kitchen appliances from Phoenix, Arizona circa 1955.

“Out of the unimaginable blackness beyond the gangrenous glare of that cold flame, out of the tartarean leagues through which that oily river rolled uncanny, unheard, and unsuspected, there flopped rhythmically a horde of tame, trained, hybrid winged things that no sound eye could ever wholly grasp, or sound brain ever wholly remember. They were not altogether crows, nor moles, nor buzzards, nor ants, nor vampire bats, nor decomposed human beings; but something I cannot and must not recall. They flopped limply along, half with their webbed feet and half with their membranous wings; and as they reached the throng of celebrants the cowled figures seized and mounted them, and rode off one by one along the reaches of that unlighted river, into pits and galleries of panic where poison springs feed frightful and undiscoverable cataracts.”