Belly up to these, bub. 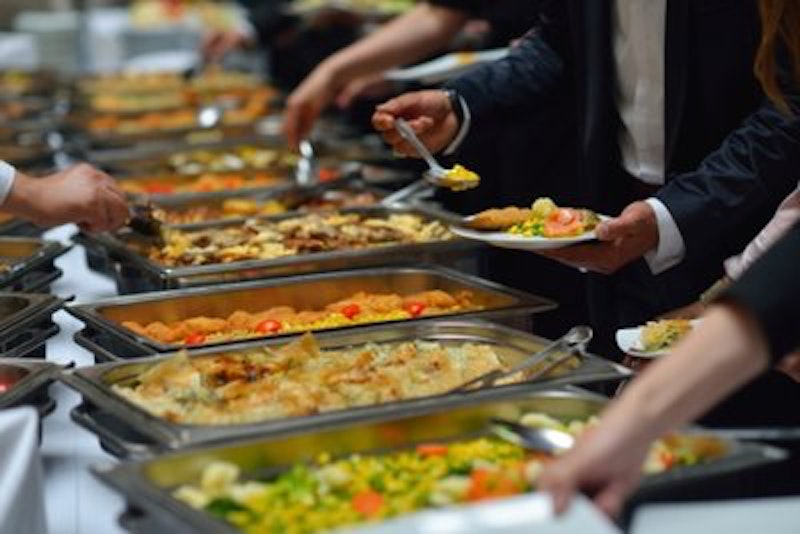 X. Do You Really Want To Have The Buffet? Seriously, do you? There’s probably a menu, wherever you happen to be, this restaurant that has a buffet as well. Have you taken a minute to peruse the contents of this buffet? Is it possible that your eyes are bigger than your stomach? Hey, whatever—you certainly know yourself better than I do, and I don’t have any investment in the decision you’re about to make. It’s your life, after all. Maybe you had an early breakfast and then were exceptionally busy during the day, moving or building something or doing a bunch of yard work, a torturous endeavor with the light at the end of the tunnel being this buffet. Maybe you’re starving. But when you’re making this decision, remember that buffet areas are like nightmare traffic jams where other people forget their manners, lose most of their self-awareness, and devolve into idiocy—and once you’ve gotten what you want, there remains the fraught return to wherever you’re seated, and then eventually you’ve gonna have to get back up—I don’t know. Do what you will.

IX. Get Some Vegetables. Some greens: beans, broccoli, a salad. Or explore other areas of the rainbow: carrots, radishes, squash, tofu. Remember, the food pyramid isn’t made of chicken wings and bacon and Cool Whip. What would Mom say? Don’t be an idiot.

VIII. Use a New Plate Every Time Up. What? Don’t tell me you didn’t know that. That’s like Buffet 101. That’s so understood that people working at buffets don’t even bother to mention it to anyone anymore, because it’s almost at that “no shirt, no shoes, no service” level of obviousness.

VII. You Can Always Get More Food. This is key. This is crucial. At least a dozen people are being paid minimum wage to make tons of food. When the pans are empty, they’ll refill those pans. That’s their job. So there’s no need to pile two or three plates with fake crab cakes and clam strips and parsley potatoes. Neatly complete a single plate, then go eat it, then repeat. What are you, a fucking bear? Is it already time to hibernate for the winter?

VI. There Will Probably Be Loads of Fruit Flies. I guess this one isn’t really a commandment, just an observation from someone (me) who loathes insects and flies of all kinds and, as such, is always hyper-aware of their presence. Basically, try to sit as far away from the juice dispensing area as possible.

V. Holding Up a Buffet Line Because You’re Awaiting the Refill of a Pan Is Kind of a Dick Move. Going to a buffet is similar to attending a buffet or hitting a golf course. Implicit in committing to these activities is the notion that you have time to spare. This ain’t McDonald’s—you do not have a plane to catch or tickets to an award-winning opera or something. You have time to graze, which is what the buffet experience boils down to. So what is the haddock pan is empty? Get some other things, get out of the way, come back later.

IV. Get Your Own Damn Food. You are not cooking tonight. You probably drove to the buffet. You are likely not tipping your server, or barely tipping. In other words, you have made a minimum effort in terms of your own nourishment. What does that mean? That unless you have mobility issues or small children or elderly parents to tend, you can walk up to the buffet and wait like everyone else and get your own damn food. I’m not talking about asking your wife to grab you a muffin—that’s small change, no biggie. But there is no reason why someone should be fixing a full plate for you if you can’t do it yourself.

III. There is nothing sane about throwing photographs of buffet plates up on Instagram. Why would you even do that? Who would envy you? Put away your iPhone and eat.

II. Be aware that the dessert section is likely as gross as it looks. ‘Nuff said.

I. Never, ever cut in line. Ever, ever, ever. Pretty much my only memory of kindergarten involves the small metal bicycles. There was a paved area behind the kindergarten where, in the mornings, we were allowed to line up and take turns riding the two or three small metal bicycles in circles for a few minutes before turning to other activities or getting back in line to ride the small metal bicycles again. Likewise, when I was a little older, the same principle applied to playing four square at Towson YMCA summer camp. It’s a core principle of cultural socialization, I suppose, a way of learning that we get what we want by waiting our turn patiently—and it’s everywhere, right? Going to the movies. Shopping at department stores. Signing up for college classes. Countless other examples abound, but for whatever reason, all that goes out the window when it comes to buffet lines. I’m not saying that everyone bucks the line rule at buffets, but so many people do that I can’t help but notice. People are just in a daze at buffets, as though the promise of hot food eradicates all notions of etiquette and propriety. You’ll be waiting in line behind some other people who are waiting in line, and you’ll all watch random idiots cut in on one side or other to dip a ladle into this or that pan with absolutely no sense that maybe this isn’t okay, or that someone who followed the rules and started at the end of the bar (where the plates/silverware are) and proceeded forward is annoyed at the interloper’s imprudence. Weird.