Skip the Turkey, I'm Having Steak for Thanksgiving

And a remembrance of Thanksgivings past. 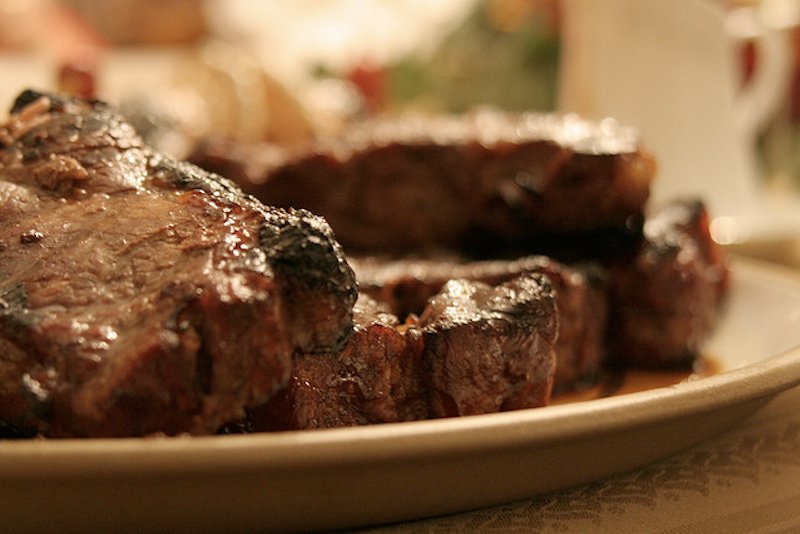 My wife and I were visiting friends in Massachusetts last week and the subject of Thanksgiving came up in conversation, after we’d dispensed with a postmortem of Herman Cain’s one-for-the-record-books presidential campaign/farce and the certain upcoming torrent of molestation revelations at universities across the nation. Not surprisingly, our hosts, who are expecting their daughters and grandchildren for the holiday, were bursting with encomiums for their “favorite meal of the year,” with particular relish for “all the leftovers.” (I hate leftovers: sure a turkey sandwich on rye the Friday after is keen, but day-old cranberry sauce? Chuck it.) When I mentioned that our family was, once again, skipping all the trimmings and instead booked a five p.m. reservation for Baltimore’s best steakhouse, their jaws dropped, as if we’d announced our intention to vote for Barack Obama or drop out of society and pitch a tent at Occupy Nashville. Naturally, I wiggled a finger to emphasize this apparent heresy.

In fairness, along with Christmas and Independence Day, Thanksgiving is a marvelous holiday: a day off, no gifts to fret about, and, when you reach a certain age, an appropriate time to walk down Nostalgia Row and recall all the Thanksgivings past. And maybe that’s why we’ve opted for the cooked cow over the cooked bird this year: when you’re honest about it, turkey and stuffing and mashed potatoes and yams makes for a boring and soporific meal. At least that’s my take, while my wife, who’s cooked the traditional meal many times in the past, is happy to miss all the preparation, recipe consultations and cooking. As the clean-up guy in the kitchen, I can never figure out where the “fancy” dishes, once washed, need to be returned. Some might say it’s a very, very minor form of child abuse that our kids, now 19 and 17, are denied this feast by the hearth, and although one of them does wish we’d adhere to convention, I just tell him, “Hard cheese, son, life gets boring absent of idiosyncrasies.”

The flip side of Thanksgiving enthusiasm is the evergreen story of how families, obligated to gather together on that day, devolve into arguments and shouting matches over long-seated resentments and slights, political differences, tipsy “crazy aunts” and bleary eyes from watching too many boring football games or Twilight Zone marathons. I have nothing but fond memories of Thanksgiving when I was a youngster, even if the meal for seven took about 30 minutes to finish, which must’ve at least subconsciously frustrated my mom after she’d spent two days shopping for food, preparing the 20 or so dishes—turkey, baked and mashed potatoes, frozen sweet potatoes with melted marshmallows, broccoli, celery stalks slathered with cream cheese, gravy, ham slices with pineapple, pumpkin and apples pies and so on—not to mention extra cleaning to accommodate my brothers home from college. Still, there was no better moment when my dad brought the bird in from the kitchen, piping hot on a garish but lovely turkey-decorated platter, and started the carving. My mother beamed, as everyone at the table said, gosh darn it, this is the best turkey yet! And it probably was.

Over the years I’ve celebrated Thanksgiving in a bunch of places: a dinner of foie gras and pheasant in Venice; several occasions at my mother-in-law’s ranch in Malibu when the kids were little where 30 people would show up and we’d pick limes off the trees for cocktails; a catered meal at the Four Seasons Hotel in Manhattan, fixed while my wife and I took the boys to a Radio City Music Hall show starring a live Arthur the Aardvark; a magnificent banquet served poolside in Barbados, turkey laced with pepper sauce, with the rest of the afternoon consumed by my wife beating the pants off my nephew and me in game after game of Scrabble; and a delightful day in Ruxton, MD, where two friends and I wound up getting our snouts into the Pouilly Fuisse a bit too early, and ending up with a burnt goose and raw asparagus, which we eschewed for more wine and a long game of Monopoly.

I must admit there’s one Thanksgiving I’d like to forget. It was 1973, and as a college freshman my roommate and I hitched a ride from Baltimore to Trenton to visit my mother, widowed just 18 months earlier. The night before, my friend and I crawled the pubs at Princeton University and, as this was the prehistoric time before designated drivers and vigilant highway patrolmen on the lookout for drunks, I was at the wheel, loaded, and zig-zagged into a bridge on the way home. We were unharmed, but the car was totaled, and my mom was justifiably furious when she awoke on Thanksgiving Day to see her crumpled Dodge in the driveway. It was a silent ride to Short Hills to have dinner at one of my brothers, and when we had a flat on the Jersey Turnpike on the way there, it was clear this was a pock-marked holiday. In the ensuing years, this provided much mirth among my brothers in recalling that fourth week in November.

Oh, almost forgot. Since I’m fairly health-conscious in my dotage, I eat a lot of skinless turkey during the year, mostly in salads or sandwiches, so a big old roasted bird isn’t exactly the once-exotic “treat” of my childhood, when my mother would prepare that meal twice a year, T-Day and Christmas. And while I have no reason to doubt the above-mentioned friends in Massachusetts about their fondness for the traditional meal with all the fixins’, I think a lot of Americans are fakers about how much they love diving into that gargantuan meal.

So, like President Obama, who’ll pardon a turkey at the White House this week, I’m doing my part by sitting down with my family on Thursday and eating backfin crab cocktail, potato skins and a 16 oz. sirloin steak.