Poker Is Here to Stay 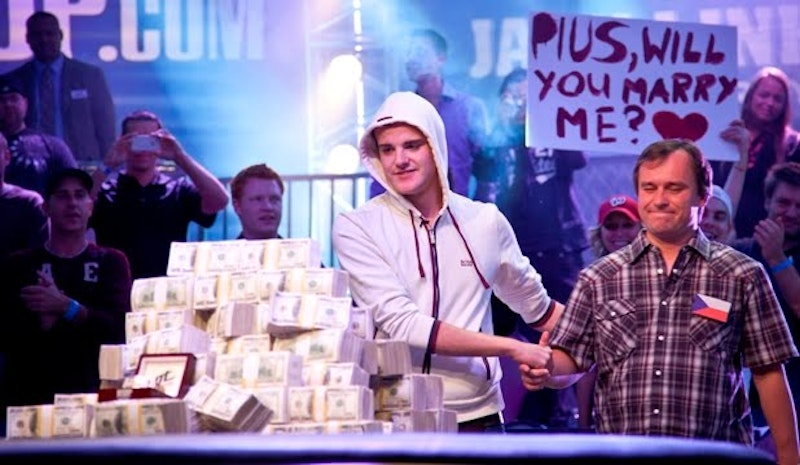 Tuesday night's final table at the World Series of Poker main event was significant for a few reasons: 1) 22-year-old Pius Heinz is now the second youngest player to ever win the main event, after 2009 winner Joe Cada (who was 21); 2) At 119 hands, this was the longest heads-up match in at least a decade; 3) This was by far the most comprehensive TV coverage of any WSOP (the highest ratings too), with ESPN2 broadcasting every hand on a 15-minute delay.

Heinz and his opponent, 35-year-old Martin Staszko, traded the chip lead nine times heads-up, with Staszko the initial favorite after eliminating third place finisher Ben Lamb in just four hands. Were this any other year the edited version of the final table probably would’ve shown about 25 hands, but watching the full 119-hand coverage was a true lesson in strategy: two very aggressive players who liked to see a lot of flops and weren't afraid to three-bet with mediocre hands or call-down the river with ace high—Heinz, in fact, took down the final hand with ace high, and had, just eight hands before that, made a brilliant all-in move with ace high, taking a four-to-one chip lead over Staszko after he called with a queen-high flush draw that never hit. For anyone who thinks poker is "just luck," sit down and watch Heinz and Staszko go at it for hours and you'll see nothing but the finest of play.

More importantly, the 2011 main event proved that poker is here to stay: after the disastrous FBI raids on the Big 3 online poker sites back in April—and the subsequent investigations that found sites like Full Tilt to be little more than "global ponzi schemes"—many thought the reputation of the game had been irrevocably damaged, and that this year's main event turnout would be somewhere around 2500, the lowest since Chris Moneymaker's revolutionary 2003 win. As Gary Wise at ESPN wrote back in August, "As the tournament neared, few would take the over on 6,000 players and many were taking the under on 5,000." As it turned out, 6865 players registered, making it the third largest main event ever. In fact, overall attendance for the 2011 WSOP (all 58 games of it) was up 3.7% from last year, and broke total prize pool records (nearly $200 million). Looks like it's still anyone's game.