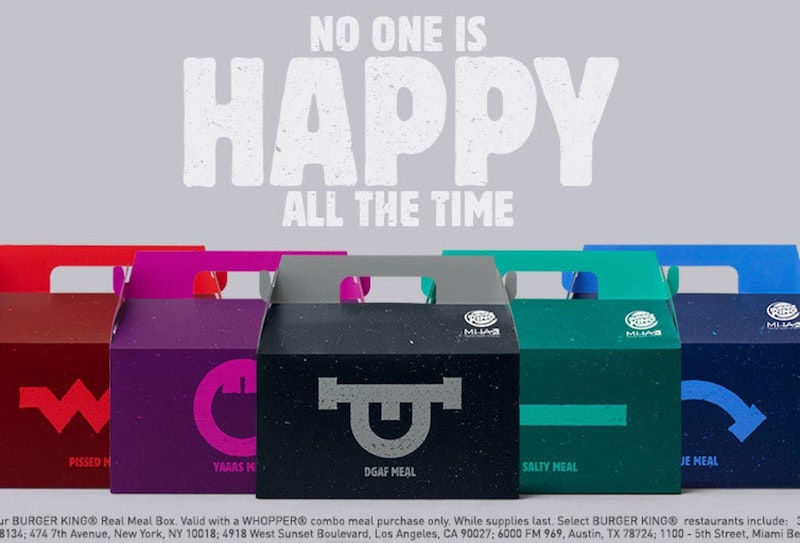 As the new Burger King commercial puts it, “No one is happy all the time.” Even depressed people purchase fast food, so maybe the burger chain’s decided to target that market. McDonald's can pretend the world's a picnic and peddle Happy Meals, but BK’s keeping things down to earth with its Real Meals. According to this ad, I can now walk to one of its restaurants with a Whopper and fries inside a red box labeled “Pissed,” although I'm not clear on what would happen if went in and ordered a “pissed meal.”

The ad presents a series of vignettes depicting bummed out young people. The refrain from a song accompanies each of them: “All I ask is that you let me feel my pain.” There's a young man who often feels “crappy,” a bullied teenage girl who “can't wait to leave this close-minded town,” and an enraged woman who told her boss to “go f*** himself.” The commercial ostensibly honors Mental Health Awareness Month, although a cynic might question whether hawking burgers to the depressed is appropriate. Watching the ad for the first time, I was reminded of the Bill Hicks comedy routine in which he instructs people in the audience working in marketing or advertising to kill themselves. It's probably the deceased comic's most famous bit, due partially to widespread public distrust of those lines of work.

The Texas comedian wasn't alone in believing that marketing’s evil. The same emotion's directed at guns, another powerful weapon, but neither are inherently evil. You can use a gun to save a life just like you can design a marketing campaign that gets people to donate to a worthy charity. If, on the other hand, you trick people into buying homes they can't afford with “no doc” loans, then you're practicing a dark art.

Socialists hate marketing, which they feel is a cynical means of manipulating people into overconsumption. Alexandria Ocasio-Cortez would say this advertisement’s a profit-hungry corporation encouraging a marginalized community to eat more beef, which contributes to global warming. A less ideological person might feel Burger King's is progressive with its recognition that depression’s not something to conceal. How a seriously depressed person would react to this commercial's anybody's guess, but I don't think it's really aimed at that group. It's more about trolling McDonald's.

The plethora of books with titles like The Persuasion Code: How Neuromarketing Can Help You Persuade Anyone, Anywhere, Anytime lend credence to the Bill Hicks point of view. People get touchy when they feel corporations are using psychological trickery to sell them stuff that doesn't improve their lives. Most will deny that a clever marketer can hack into their brain, but there's ample evidence to the contrary.

Combine neuroscience-based advertising with digital technologies and the addictive qualities of the Internet and the threat to individual agency's amplified. There's an entire academic field based on discovering ways that marketers can break down people's resistance to advertising. Groups huddle every day in Northern California office buildings to figure out how to tweak computer code that’ll cause people all over the world to modify their behavior without even being aware of it.

A leaked report showed that Facebook conducted research to determine when young people using the platform felt insecure and “worthless.” And then there was the social media giant's massive experiment involving 689,000 users resulting in the discovery that it could manipulate people's emotions via something called “emotional contagion.” Mark Zuckerberg isn't the only one who's not partial to the Enlightenment ideal that everyone should think for themselves.

Marketers respond to criticism by asserting that they're free to say what they want and that consumers are free to purchase what want, despite what left-wing columnists will tell you. By this, of course, they mean free in the legal sense, as morality’s not something would-be billionaires burden themselves with.

The Burger King commercial isn't immoral, but using depression to sell Whoppers is something a socialist might point to when discussing the late stages of capitalism. You could also call it inappropriate, given that a study found evidence linking fast food to depression.

This commercial's statement on mental health strikes an odd note. What does it even mean to say that people should be free to feel their pain? Shouldn't someone who's hurting be encouraged to seek professional help instead of resorting to stoicism? Burger King wants us to think it cares about these people, but of course it doesn't. You'll notice that the firm didn't say it was donating a small percentage of its May profits to promote mental wellness. Selling you a Sad Meal in a cleverly-packaged box is as far as it's willing to go.