I went from TGI Friday's to Maui’s Spago branch. 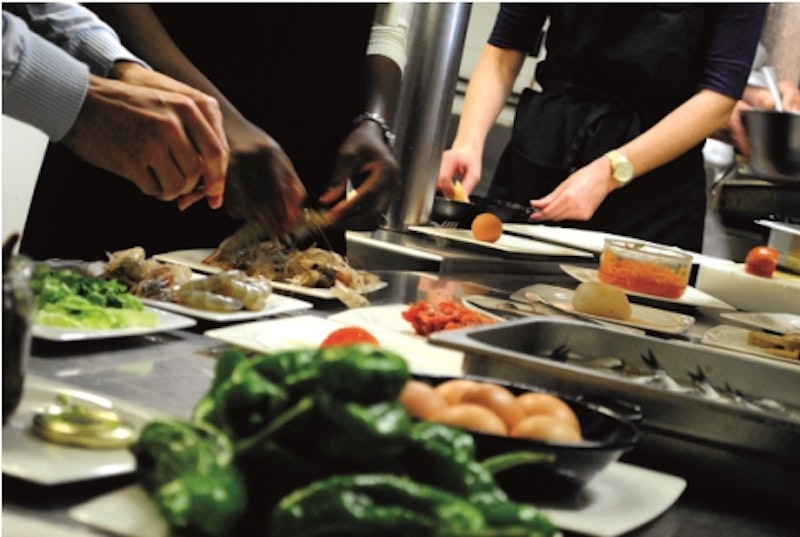 Back in another lifetime, I dreamed of becoming a chef. It bordered on obsession, to the point where I'd go into a Barnes & Noble and spend hours copying down recipes in my notebook that I'd never actually prepare. At the time, I had an office job that was slowly crushing my spirit. Spending days analyzing commodities charts made me hate life. After work, I sought solace in bars all over town, but in the morning the rainfall in Brazil charts would still be on my desk and the misery would start all over again. The plan I hatched was to move to Hawaii and get a job as a cook. I’d never been to Hawaii, had never cooked professionally, and didn't know anyone who lived there. The plan was preposterous, and people looked at me quizzically when I told them about it, but I did it anyway. I quit my job and started to put the wheels in motion.

Before embarking on this quixotic culinary adventure in Hawaii, I decided to get a few months of kitchen experience. No place decent wanted to hire a guy who had quit a respectable job to work in their restaurant, so in desperation I ended up at the worst possible place—TGI Fridays. It was, as expected, hell. I’ve blocked most of the day-to-day experiences at TGI Fridays out, but I do remember my manager, whose management style was somewhat idiosyncratic. It mainly involved him pretending that he and the other cooks he supervised were gay. Almost any interaction he had with his charges had a gay reference of some sort, along with a lot of laughs. I never attained the status of my manager pretending we were both gay, which I took to mean my advancement prospects at TGI Fridays were not strong. Somehow I lasted nearly three months, having learned almost nothing of any use, except never cook at a restaurant you would never eat in.

When I got to Hawaii—specifically, Maui—I had a place to stay. My brother-in-law had set me up with his friend, a French guy named Denis who worked as a waiter in a hotel and smoked copious amounts of weed in his off hours. Marijuana, I was soon to discover, is very popular in Hawaii. I saw that Wolfgang Puck had a restaurant on Maui—a branch of his famous Spago restaurant in Hollywood where all the stars hang out—and decided that’s where I wanted to work. Spago was inside the lavish Four Seasons Maui resort, and I started showing up there every day and asked to speak to the chef. I told him I'd sweep the floors, or whatever he needed, and eventually he told me to come in and work a dinner service so he could check out my skills. I hadn't told the chef the "other" restaurant I had just been working at was TGI Fridays. It remained my dark secret.

The audition went fairly well until the chef asked me to chiffonade some basil, which means to cut it in very thin strips. What I did to the herb was far from a chiffonade, however, and this didn't go unnoticed. Later on in the evening, the chef told me it was clear I didn't have much professional cooking experience, but he offered me a dishwasher position that I instantly accepted. I was in!  Washing dishes at Spago was a punishing task, but I was diligent. My efforts paid off, and in a couple of months the chef told me I was going to work with him on the line. We were responsible for cooking all the meat dishes and their sides on the "grill station." Across from us was the fish station, and four cooks were wedged in between four 500-degree ovens. Dinner service on a busy night was an athletic event, leaving me exhausted the way my cross-country practices back in school used to. The cold sweats, brought on by the hard labor in overwhelming heat, kicked in somewhere around the last hour on the line almost every night, telling me my body was nearing its limits. I’d drink beer alone on an empty beach to unwind.

The cooks were a motley crew who smoked a lot of Maui's finest on a daily basis. Some were surfers who got up at six a.m. to catch the waves, wherever they happened to be breaking best that morning. One was a lawyer and another had just come from Wall Street, where he was said to have been some sort of whiz kid who had burned out on the game. Neither the chef nor his sous chef had culinary degrees, which surprised me. They were stoners who had scrapped their way up the ladder. We regularly had what were called "externs" from the California Culinary Academy come in for stints in the kitchen as part of their degree program. The externs were about $30,000 in debt by the time they arrived, but they couldn't do my job, which was satisfying. Nothing in school teaches you how to deal with the volume I’d learned to handle. One of the externs was so bad—she cut herself several times a week—that she ended up washing dishes. Another cook, who had also started as a dishwasher, would mercilessly taunt her about spending tens of thousands of dollars to end up washing dishes. Kitchens can be brutal places.

To the externs, with their overpriced degrees, I was a grunt who used to be a dishwasher, but from my point of view they were cocky brats who lacked skill. Degree or not, they generally couldn't hang in the kitchen. When a person who saw me as a grunt was demoted to washing dishes, it gave me more pleasure than I can describe. The externs' mistake was going to culinary school before getting a few years of real experience in kitchens, which made them dilettantes in my eyes. Their attitudes wrote a check their abilities could not cash.

After two years in the kitchen, I realized I wasn't destined to be a chef. I didn't like the brutal heat, low pay and always working on holidays. It takes a special breed to put up with all that, and I’d found that the reality of the work was not in synch with my idealized version. I returned to the mainland, and reality. But I’d spent two years living my dream, following my passion. I got it out of my system, and now I never have to worry about that voice nagging me. The skills I acquired are regularly put to use in my kitchen, so I have something tangible to take away from the experience too.