Japan has some of the greatest cuisine in the world. 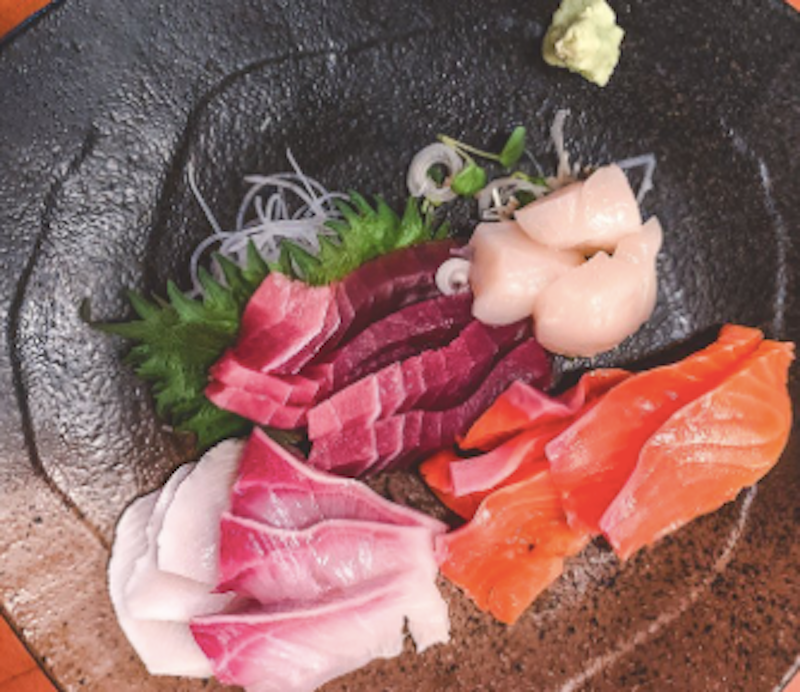 One day in Tokyo, while calling for a Pizza Hut delivery, I was shocked to learn they offered a "corn and tuna" topping. That's unthinkable. And then there's the "spaghetti sandwiches" that are ubiquitous in Japan. But Japan—especially Tokyo—has some of the greatest cuisine in the world.

Unfortunately, my go-to for about the first two weeks in Tokyo was McDonald's, which back in the States I'd sworn off. Ordering from a Japanese menu was too intimidating, but then I learned that I could take the server out to the display case in front and point to the item I wanted. At that time, I hadn't yet learned about the low-cost restaurants displaying photos of their dishes where you can purchase a ticket for the one you like in vending machines. Then you hand the ticket to a restaurant employee and they bring it out to you—no speaking is required.

The first place I dined at regularly was what's known as an izakaya, a casual drinking spot serving small tapas-like plates. After a few visits, I became friendly with the jovial, madcap chef/owner named Hoshi, who was what the Japanese call the restaurant's "master" (MAH stah). Joking around with Hoshi, which he proudly told me meant "star" in Japanese, as he worked behind the counter added to the evening's pleasures.

The best way to envision this quintessential Japanese experience is to watch a few episodes of the fine Netflix series, Midnight Diner, a Japanese production that takes place mostly inside an izakaya, late at night. Among the typical dishes served in such establishments are karaage (fried chicken bites served with a mayonnaise sauce), edamame (soy beans), yakitori, sashimi, ikayaki (soy-marinated squid, grilled whole and then sliced into rings), and korokke (panko-crusted croquettes filled with mashed potatoes and crabmeat). I ate at this place in the Shibuya section of Tokyo much more than any other during my time there. I became so close to the owner that he invited me to return to his hometown for a weekend.

Moving up from the humble to the pinnacle of Japanese cuisine, there's kyo-ryoori (Kyoto cuisine), which combines stunning visual presentation with subtlety of taste. Restraint and simplicity are emphasized over ornate decoration. I enjoyed this elegant cuisine just once, on a visit to Kyoto, and it's unforgettable. Over the course of consuming 12 or so courses, I became friendly with the chef/owner while sitting at the counter. It was raining that night, and when we headed out the door he walked us to the train station with his umbrella. A couple of weeks later, I received a handwritten letter from him expressing his warm thoughts about that evening.

One of the best aspects of Japanese restaurant culture is the set-menu meal known as teishoku that many restaurants feature as lunch specials at an affordable price. If you're traveling on a budget in Japan, opt for this as the day’s main meal, as you'll get—all served at once—meat or fish, vegetables, pickles, rice, and miso soup for as low as $8. The quality of the meal is high, no matter where you go.

Whereas at a Japanese restaurant in the U.S. you might have your choice of such dishes as sushi, tempura, katsu, and sukiyaki, in Japan restaurants often focus on just one of these selections. If you want tempura, you go to a tempura place, where the chef's able to focus on deep frying fish and vegetables, while fine-tuning his technique as the years progress. The quest for perfection is unimpeded by any other diversions, which is how 11 tempura restaurants in Tokyo ended up with Michelin stars.

An example of this specialization is a restaurant called Maisen in the Omotesando section of Tokyo that specializes in tonkatsu, a deep-fried pork cutlet. When I visited the place, which is housed in an old bathhouse, we waited in line for about an hour, but it was worth it. I wondered why it came on a plate with a wire rack on it, and learned that this method keeps it extra crispy. Attention to every aspect of the food preparation process is what makes Maisen special. This is a reflection of Japan's shokunin ethos, which emphasizes devotion to artisanal work.

Maybe you like to buy sushi at the supermarket and take it to the park for lunch. The problem is that your rice is going to be cold, which is the wrong way to serve it. In Tokyo, go to one of the many tiny sushi takeout places where you stand outside and order, and you'll get it the right way. If your yen are running low, buy a couple of sushi rolls with canned tuna filling.

I could go on about all the other quality food options in Tokyo, but let's compare it to New York City, where I've also lived. These are probably the two best cities for food in the world. I think the tiebreaker is the incredible variety of top-quality prepared food available in the basement level of Tokyo's luxury department stores. The subterranean food destinations known as depachika  are mind blowers. If you had only one hour to explore the entire gamut of Japanese cuisine, this is where you'd go. It's all available—bento boxes, sushi, tempura, yakitori and even lasagna. Plus you can get high-quality French bread, croissants, assorted pastries, and desserts with stunning presentations, all prepared by chefs trained in France. The average depachika also has a huge deli section featuring food from all over the world. In fact, everything displayed in a depachika has a stunning presentation.

Another tip for budget travelers: hit a depachika around closing time for discounts, but be prepared for jostling, especially with bargain-hunting seniors. You'll find anything you need there for a fine meal in the park or in your hotel room. Tokyo's basement food emporiums are what tips the scales and makes the city nicknamed the Big Mikan (tangerine) the world’s best food destination.