New York City doesn't have all the good food in the state. 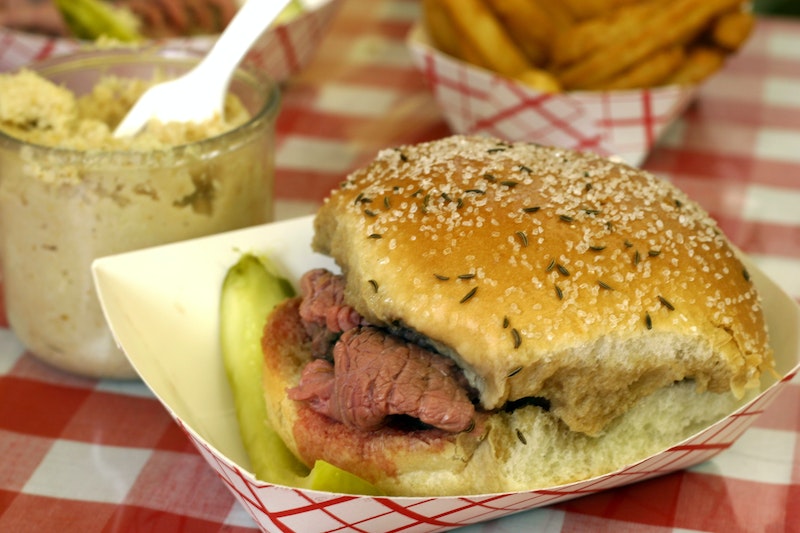 You know about Buffalo wings, and unless you're a vegetarian you probably know how good they are. You know they originated in Buffalo, New York and may even be aware that they were invented at the Anchor Bar on Main St. But I bet you can't name another local culinary specialty in the entire upstate New York region unless you happen to hail from that area. That's because, unlike Buffalo wings, few of those culinary delights have travelled beyond their birthplaces. They're regional gems, frozen in time.

We'll start this culinary tour up in the North Country in Plattsburgh, a small town near the Canadian border. When I'd travel up there during my college years, I'd make sure to get a few "michigans," also known as "michigan red hots." That's the local hot dog that's steamed, placed in a bun that's split along the top, and then topped with meat sauce with a kick, raw onions, and yellow mustard. You can get a michigan (the "m" is not capitalized) over the Canadian border, and all the way down to Lake Placid at almost any roadside stand, diner, or gas station.

As the story goes, a woman from Detroit brought the meat sauce to Plattsburgh, but the locals will tell you there's no real Detroit hot dog flavors in the michigan. If you want the onions on top of the sauce, say "with"; say "buried" if you want them under the sauce.

Moving south a bit, we arrive in Utica, NY, a city of 62,000 in the Mohawk Valley region, ancestral homeland of the Native-American Iroquois Confederacy, and major destination for Italian immigrants, starting in the 1880s, due to plentiful jobs in the mills and on the railroads. This is the home of Utica greens, an Italian-American dish made with hot cherry peppers, sauteed greens, chicken stock, escarole, cheese, pecorino, bread crumbs and variations of meat and prosciutto.

This dish was popularized by chef Joe Morelle in the late-1980s at the Chesterfield Restaurant in what was then often called Sin City because of Utica's rampant corruption and mob influence. If you make it to Sin City, act like a native. Don't order Utica greens―ask for "greens Morelle" instead. Many locals just call them greens.

Before you leave Utica, make sure to try the town's other speciality―"chicken riggies," a spicy Italian-American pasta dish. While many restaurants lay claim to inventing chicken riggies, and there are several variations, typically it consists of chicken, rigatoni, and roasted hot or sweet peppers in a spicy cream and tomato sauce. It's the roasted peppers that give the dish its distinctive flavor.

Next we head down to the Southern Tier region, just above the Pennsylvania border in central New York. Binghamton's known as the Carousel Capital of the World for housing six of the remaining 150 antique carousels in the world. Ride the painted pony, if you feel like a spin, and then you'll want to try a spiedie (SPEE dee)—cubes of marinated meat—chicken, pork, beef, or lamb—skewered, char-grilled, and served on fresh Italian bread, the preferred way, or on a hoagie roll. Originally the bread was used to remove the meat from the skewers, making an instant sandwich.

Spiedies are less-is-more simplicity―just meat and bread. There are no condiments, no lettuce or tomatoes. The only sauce is a drizzle of fresh marinade sauce. The key to making spiedies is to marinate them in a special Italian-style oil and vinegar dressing with herbs (the top ones are guarded secrets) for at least 24 hours, and up to three days.

Italian immigrants brought the concept of the spiedie to upstate New York in the early-1920s. Then it was made only with spring lamb. The "chicken category" was added to the Spiedie Fest cook-off (a festival held in August for over three decades) in 1987, and quickly became the most popular meat choice. I recommend sticking with the lamb, however, for the extra flavor and authenticity.

Now it's time to head west to the gorgeous Finger Lakes region, where I was brought up, for some Cornell chicken, a preparation invented in the early-1950s by Bob Baker, a former professor of food science at Cornell University in Ithaca, New York who also invented chicken nuggets. You can find this delicious chicken all over central New York, but in Ithaca this tangy, succulent grilled chicken is served at every fund-raising event, fire department cookout, and little league barbecue. What makes it unique is that the egg’s blended in with the oil and vinegar in the basting sauce, and the white barbeque sauce that it's served with that's made with mayonnaise and cider vinegar. Constant basting of the chicken while it cooks on the grill means that it finishes with crispy skin on the outside and moist meat inside.

Cornell chicken is often served with salt potatoes, a culinary specialty of nearby Syracuse, served in the summer when the young, bite-sized potatoes are first harvested. The tiny taters are cooked in heavily salted water which forms a crust on the skin and seals the potatoes, giving them a unique taste. All that salt means that the cooking water boils at a higher temperature, so the starches cook more thoroughly, yielding a creamy texture.

Finally, it's on to Buffalo. There's nothing new to say about Buffalo wings except maybe don't order them with ranch dressing when you're in Buffalo, but the City of Good Neighbors has a second, less celebrated, culinary specialty unknown to most Americans. "Beef on Weck" (they capitalize the “B” and the “W” in Buffalo) is carved roast beef served on a kaiser-like kummelweck roll that's topped with pretzel salt and caraway seeds. “Weck” is soft and chewy on the inside, and firm on the outside. It's the perfect vehicle for a heap of rare, thin-sliced roast beef topped with sinus-clearing horseradish—no horseradish-based cream sauce allowed. The cut face of the top half of the roll may be dipped in the jus from the roast, or the jus may be served on the side.

The sandwich's origins are fuzzy. It's generally accepted that in the late-1880s a German baker brought a recipe for kummelweck to Buffalo. An enterprising local bar owner thought that the saltiness of the roll would make his customers drink more, so he split it and put roast beef and horseradish inside, giving birth to a legend. Bakers outside of the Buffalo area don't seem to be able to make a decent weck so a great American sandwich has stayed local. If you're visiting Buffalo, visit the Anchor Bar, but don't leave town without trying a Beef on Weck. That would be a culinary crime.