Meals, Peels, and Fights on Wheels

Monica reminisces about past romantic meals in restaurants, and suspects Rooster (or “they”) have hidden cameras and microphones around the barn, but specifically her wing (heh). 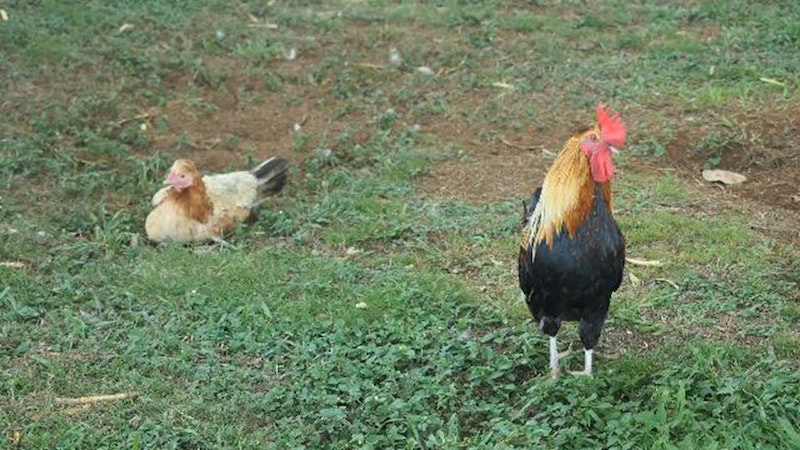 Rooster and Monica Quibbits, socially distanced on one of their walks.

Rooster hasn’t said a word all morning. I wonder why he’s sleeping so late. Usually he’s first to rise, first to bed. Meals are regular, fights inconsistent. One time we threw rocks at each other over a couch disagreement; another day, we did our best to draw blood over who’d get the last vegan donut (I won); years ago, when Rooster claimed he “lost his credit card” at a Michelin-rated restaurant in Bordeaux, after we had already returned to Paris. What a nice waitress we had that day—she paid for the whole meal. I saw her crying in the back, being berated by a bald man and beaten with a baguette, but, ah, she still had a certain jouissance.

Meals have been regular for a long time. Nobody in my family has ever had any gastrointestinal issues to speak of—my father and mother, though we won’t get into them, long since deceased and of a lower caste than I aspire to (and belong to, frankly and thank you), they were fit as fiddles despite their poor life decisions, character flaws, and other endemic qualities that made it impossible for them to ascend out of their status as barn animals, that dreaded pronunciation of “untouchable” statuses given by birds of intellect to the beasts most abused by mankind. We should be more kind, more sympathetic, for it’s this lack of class solidarity that is keeping the birds from taking over the world like we’ve always said we would.

But I digress. Back to my husband’s tummy.

Rooster hasn’t been regular lately. No—he’s always in the toilet. Why? I asked him as much the other night, at dinner, at home (what a miserable year it’s been! No restaurants with sexy waiters in espadrilles ready to conquer an empire for me or behead a heathen)—ugh, anyway, my bitchmade husband: “Stress and lack of exercise. Why are you looking inside my beak, Monica? Are you okay? You’ve been staying up later than usual lately. I’m worried…” He’s trying to get out of it because he knows he’s a guilty boy. My husband is hiding his drugs in his beak, but they’re so well stored (I married not only into money but into talent, I’ll say that), that they’re basically invisible and no one can see them, including me, but I just know Rooster is hiding something from me in his mouth.

Things weren’t always like this. We used to go to Cannes and eat on the Croisette during the film festival. We rarely went in, I don’t remember a single movie we ever watched. But we had SO much cream. Holy shit. Riiiiiiiich—the food and the people. It’s nice being somewhere where people can wear seersucker suits and penny loafers without being made fun of or surreptitiously photographed by social media users chasing their next high. Back when we went, credit cards were new, TV was the enemy, and no one could ever get anyone else on the phone. Good Lord, finding someone in those days was an adventure in itself. You ever just wait for someone now in a public place for half an hour, 45 minutes, two hours? No—you leave after five and never contact them again.

One time our waiter made the mistake of bringing us “chicken” when I’d clearly asked for “gombo de la mer aux crevettes et bonbons et tarte aux pommes.” I was basically fluent at that point, but he must’ve been bigoted, because he brought us a carcass, and then suddenly I had to spend the night in jail. Apparently Rooster bribed the restaurant owner and had it declared a “natural disaster” that would not only absolve me of any wrongdoing in the waiter’s untimely death, but would also result in a fine insurance bonus for the owner. Everyone wins!

Later, in the hotel, we were talking about art. “I only write because I’m unhappy, or to purge some spite or frustration or annoyance. I’ve never written out of pleasure.” I smacked and slightly spur-clawed Rooster until I had him spread-wing: “You know that’s not true. Our love letters. You called me a creature of Heaven. I’ll never forget that.” We both cried, we were so happy that night, and for so many years to come.

Now I’m having problems. He won’t let me look inside his beak at will! “Monica, you need to see a doctor. I’m worried about your eyes—why are they always wide open and dilated? I’m not trying to imply anything, but ehhhhh…. You know.”

All of a sudden my husband is backed into a corner, himself wide-eyed and silent. Why?

“Monica, I just want what’s best for you. Isn’t that what love is?”

We’re going to go out tonight. One of our new vegan friends, a cockatoo restaurateur named Betty, is having limited seating and meals for couples in her cottage just a few miles down the road. We’re going to walk, under the moon and amongst the crickets and fronds, and we’re going to sit down and order whatever we want, and stay as late as Betty will have us, because we love each other, and loving someone means wanting what’s best for them, no matter what they have hidden in their beak or inside your bathroom walls. No matter how many fights we’ve had, objects we’ve broken, nights we’ve ruined, trips never taken, and children never grown. No matter how much has happened to us in all of the hundreds and hundreds of years we’ve been together, we still love each other—and, as you know, loving someone means wanting what’s best for them.

“Betty, what’s on the menu tonight?”

“I have cabbage and loaf.”