Picking up wrappers and thoughts on society. 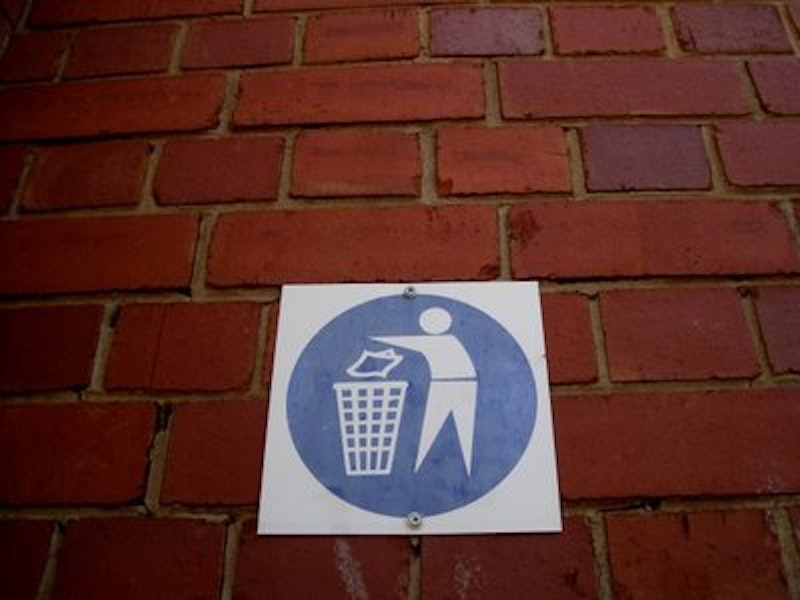 A neighborhood might be defined in part by the litter you find on its sidewalks. I pick up trash and throw it away, in all neighborhoods. I pick it up in my neighborhood, in the Outer Richmond district on the edge of San Francisco, to the one where I work, in Bayshore, Daly City. I do this for two reasons: 1) to keep my environment free of trash; and 2) because it was such a big deal to my mother.

On a Wednesday morning last week, I picked up a small cardboard container that once held a pregnancy test. The E.P.T. box sat there, hastily torn open. It was in the dirt that leads to the door of the building where I teach. Usually, I find the remnants of cigar wrappers, the kind of cigars that are gutted in order to make a blunt, not the kind that are smoked outside of country clubs. I’ll find the tobacco spread on the steps. I sweep it off, and pick up the wrappers. Sometimes there are mostly empty bags of chips. Fast food wrappers. Soda cans. Occasionally there is broken glass, which I gather carefully before tossing in the garbage can inside.

The pregnancy test box made me despair for a minute. If you’re tossing the box on the ground, you’re probably not ready to think about being responsible for a baby. This had me thinking about birth control, and how I wish it was readily available to all females, from teenagers on up. Planned Parenthood tells me that you need a prescription to get birth control, and that you need to take a pelvic exam first. The exam might cost $200, according to some estimates. Then you can get the prescription. The pills cost $20-$50/month. I’m wondering if this pregnancy test taker knew about these costs. If she lives in this area, it’s unlikely she could afford the exam, much less the pills. Was there a condom involved? Did he pull out? Was it one time? Was it out of love? Was it someone she knew well? Someone she trusted? Was it what she wanted? It must have been a younger woman, right? Why else would she have left the box outside? All I have is questions.

I pick up wrappers near my apartment building when I’m walking with my dog. He doesn’t notice the wrappers unless they have food in them, but I do. Mostly energy bars. Probably from the runners on the edges of this golf course, which leads to a trail that traces the along the city’s cliffs, with staggering views of the Bay below. Luna Bar wrappers. People running and littering simultaneously. People also leave dog shit on the edges of these trails, or on the little grassy areas bordering the sidewalks. Drives me nuts when I have to narrowly avoid it while picking up my own dog’s feces. The middle school kids, walking the four blocks up the hill to the neighborhood park. Soda cans. Food wrappers from the grocery store nearby. Things dropped flippantly, within 50 feet of trash cans.

It’s more surprising to see the trash littering the ground by the landscape of tall trees, the occasional red-tailed hawk soaring above, the multitude of midnight black crows, the dried yellow weeds and the verdant newly-trimmed fairway. The golfers are as unwelcome as the wrappers. But I can’t pick up the golfers and put them in the little metal cans, so I give them a nod, and some smile at the gregarious dog, who is anxiously anticipating another chance to take off in pursuit of his orange rubber sphere, and we wait for them to continue on toward the final hole.

Among this natural beauty, the wrappers appear especially unwelcoming. Shouldn’t trash get thrown away regardless of where you walk? Regardless of income and demographics? I guess it’s about expectations. Maybe that’s what makes the pregnancy test stand out. I can’t imagine seeing it in most neighborhoods, sitting there in the grass. Though women in wealthy houses are taking pregnancy tests on a regular basis, they’re often afforded the safety of opening it inside their homes, taking the test privately, finding out the life-changing results, and then taking a minute to feel either wonderful or awful, depending on what they hope the test reveals. I hope that the young woman who threw that box on the ground got to feel a sense of relief, or got to feel wonderful.

—Jonah Hall writes about people and trash, culture and sports, especially the NBA, at www.darkoindex.com. On Twitter: @darkoindex