You can apply for a hundred jobs and get a call back from one. 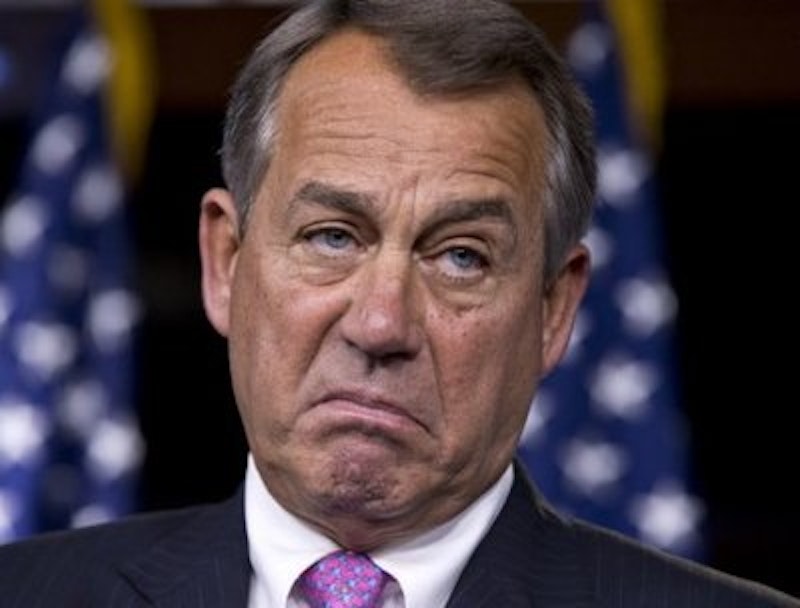 Have you heard? The long-term unemployed are lazy, lacking drive and motivation, and have decided they’d rather just sit around to become the sickness of our country. Last week, House Speaker John Boehner stepped out of his ivory tower to share his theories and revealed he’s not only sanctimonious, but entirely clueless on the plight of people who don’t have his ability to vote their lifetime benefits into existence.

Today’s job market is fierce. You can apply for a hundred jobs and get a call back from one. Of the hundreds of resumes hiring managers filter through, you’ll be selected to interview and compete with 50 others. After the first cut, you’ll be competing with only 40 others. By the fifth interview, you may get the job. Then again, you may also be the runner up and sent back into the open field.

Do you know how much time is spent just getting through this process?

If you haven’t had the pleasure of filling out online applications, correcting erroneously populated data fields, taking mandatory tests, personalizing the cover letters, and completing questionnaires specific to the company and job, let me enlighten you: the process is much longer than simply forwarding your resume.

Last week, I applied for four facilities manager positions, two property manager, one administrative, one non-profit, one teaching, and three minimum wage service jobs. I also met with a new recruiter (since the last hadn’t produced any viable job opportunities, much less interviews), continued my French and Foreign Services Test studies, and submitted three magazine articles for consideration. Additionally, I attended the weekly meeting of a job-seekers group, worked a few hours on odd jobs and micro tasks to bring in a few dollars, and met with a lawyer surrounding some legal issues directly resulting from the current economic situation.

In case you haven’t figured it out, Speaker Boehner, day-to-day responsibilities and requirements do not disappear when you become unemployed. People still have chores and repairs around the house, maintenance on their cars, meetings with school teachers, carpool the kids, and deal with sickness, deaths and tragedy. They just have to do it while negotiating with bill collectors and juggling a miniscule income in the hopes of surviving just one more month.

While members of Congress are voting on lifetime benefits for themselves and debating legislation that will never pass, the so-called lazy unemployed are busy trying to rebuild their lives in a system that is blocking their every move. We are engaged in a war that most people only peripherally know is being waged much less understand what it’s like on the front lines. Perhaps if politicians would put away their judgments and actually do the work involved to see what the new image of the unemployed actually looks like, to understand what’s really happening in job market, they wouldn’t make such unmerited, foolish statements like Boehner’s.

But that takes work; it demands time, patience and attention. It’s a challenge, and more often than not the results of enlightenment result in egg on the face and a little more crow than can easily be digested. For a politician, the truth becomes an embarrassment. It’s much easier to sit in the lap of luxury and call the less fortunate lazy. Cheers, Speaker Boehner. May you never face adversity and face the sanctimony of your own ideology.