There's no logic to greed. 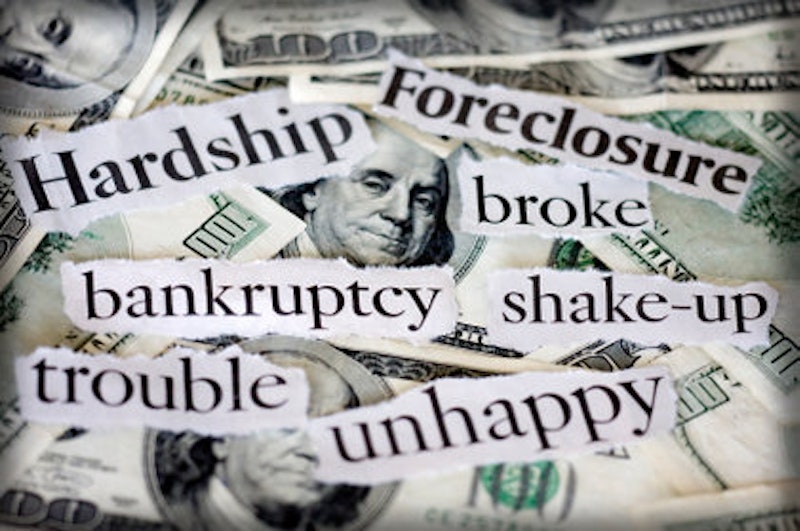 My mortgage is not upside down.

I breathe a sigh of relief. I mean, that's good, right? My home is valued at more than I owe, which is a better situation than many have been facing during this long recession. So, even though I had a couple of missed payments, it’d seem logical to assume the equity and valuation would make a loan modification worthwhile. At least that's the general consensus, that's what is suggested, or rather inferred in the advertising for these home affordability programs.

As it turns out, an upside down mortgage encourages a bit of humanitarianism, whereas a stable investment encourages greed.

My lawyer explained an upside down loan means the mortgage company is guaranteed a loss at a foreclosure sale. The value of the home is less than the mortgage, so they are sure to get at best the actual value of the home, which is a loss for them, and at worst even less than the value of the home, which is an even bigger loss. In my situation, the home is valued at well over what I owe on the mortgage. This means there is a very real opportunity to sell my home at a foreclosure sale for not only what is owed on the mortgage, but perhaps a little more. At worst, they would sell it for what is owed, a deal for the buyer and a clean break for the mortgage company. Why offer the current homeowner a loan modification, accepting five years of reduced payments and extending the length of the mortgage—which may in the long run be an overall gain, but in the short-term is a loss of cash flow for what is deemed a risk—when you could instantly cut a liability and produce an immediate profit?

Because there's a person living in the house? A person who was faithful in payments for 14 years until a hardship. No. Because foreclosures hurt the overall economic recovery of the country? Because homelessness is a drain on the system, while a modification keeps the engine running even though it’s at a lower gear? No. Because people matter? There's no logic to greed.

The mortgage company still refuses to accept my payments. I have faithfully sent payments for five months now, and they have faithfully returned them stating unless I pay the arrears (the two months lapse, plus all late fees and penalties plus filing fees plus the five payments they've returned) it is considered a "short" payment, and therefore unacceptable.

Had I known there were conditions to the affordable housing plans that limited relief to only those situations that benefited the mortgage company, I would’ve sold my home on my terms long ago. But not only is proof of employment necessary to rent an apartment, moving requires upfront fees: rent deposits, utility transfer fees, move costs, etc. I've been long-term unemployed (or underemployed) for a while now, and even though I send out resumes and interview weekly, there's no guarantee I'll have a job in the near future. The prejudice against this large group of job hunters is staggering. Pursuing the loan assistance was the suggested move from realtors, financial advisers and the HUD counselors.

I'm here now, facing the dragons. So what do I do? They won't offer any assistance and foreclosure is now pending, what is my next move? Bankruptcy. What? You heard me. Bankruptcy. The mortgage company cannot foreclose on a person who has filed bankruptcy. They must offer a stay and wait for the court to establish what will be done with the house. This process could take up to four months, during which time circumstances can change dramatically, the mortgage company will reconsider a modification, and/or the house can actually be sold by the owner instead of the lender.

A quick sale is an option, but that will still leave the homeowner indebted for the remaining balance after the sale, and it doesn’t provide any money to offset the homelessness. The bankruptcy plan provides a time cushion for the homeowner to regain control by either selling the property in a standard sale or by obtaining the loan modification (which suddenly becomes more viable to the mortgage company when faced with a bankruptcy stay).

I was raised to fear bankruptcy; to avoid it at all cost. Now it’s a problem solver? “It will be on your record for seven years, but the truth is companies will start helping you rebuild your credit in just a few months.” In this strange world, bankruptcy is a new start for the homeowner… and all for a couple thousand dollars for legal fees and court cost. "You can charge it and it will be written off in the bankruptcy."

Pay for the bankruptcy with the credit you are about to default on in the bankruptcy. How ridiculous. The economy is barely recovering and this kind of system is in play to further slow it down. It’s absurd. It only takes an illness, a freak accident, a shift in the economy, or a change in management to find yourself facing a chasm of loss and a mountain of prejudice. It’s really easy to be sanctimonious about other people’s problems; it’s humbling when you realize how quickly they could become your own.

Through great struggle, I’ve been paying my bills for months. I haven’t tapped into any of the government assistance programs, primarily because I've been blessed enough to find ways to meet the needs without going that route, but also because I'm single and childless. The programs are geared to mothers and children, many people don't realize that. Most people don't care. The credit counselors who've evaluated my budget have been amazed at my creativity and how I've managed to not fall even farther behind. Apparently, the "experts" feel I should be applauded.

Their opinions don't matter. Anyone who has been through a hardship and forced to actually work within the system could predict the Keystone Cop approach. Those who haven’t, condemn. The view is different when you fall from the penthouse. I've been trying for months to do the right thing; it's gotten me nowhere. The judgmental whispers and condescending frowns mean nothing to a person in survival mode. I will find an alternative; I will be free from this bondage. The prejudice I face is just another shackle in a system that imprisons. It doesn’t produce positive change in the country or in the heart. That is their shame, not mine.