It’s impossible to eat healthy and the players need their greenies. 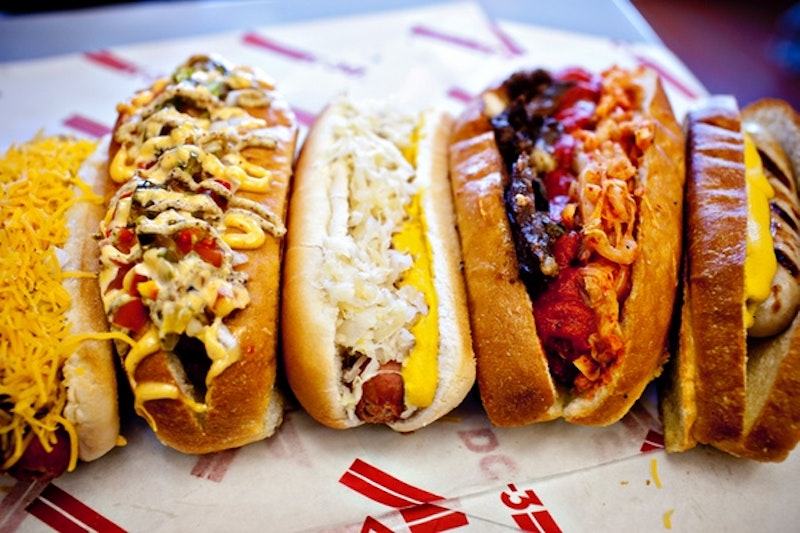 It’s impossible to eat without feeling awful when attending a concert, movie or baseball game. Am I asking for vegetables to be thrown at me for suggesting we gets some wraps and salads at Camden Yards? I know that burgers, fries, chicken tenders, hot dogs, pulled pork sandwiches, popcorn, pretzels, ice cream, Cracker Jacks, and cotton candy are delicious and necessary elements of the stadia menu, but at least on the East Coast, or here in Baltimore, I’m surprised there isn’t at least a cruddy Subway in sight. I fee like a falafel stand would do well beside the Polock Johnny’s, $8 draft beers, and Dippin’ Dots. Especially now that the Orioles have a shot at the World Series, why not capitalize on the emerging acceptance of food that doesn’t turn your insides into cement? Ever heard of Freshii?

Baseball players should be allowed to use whatever drugs they want because the food in the stands is crap. The only option at Camden Yards is a coronary in slow motion, and Chris Davis gets suspended for taking Adderall on a technicality (he had a prescription that hadn’t been renewed)? Greenies have been banned for nearly a decade and all the shit that shrinks your balls and makes your muscles big dragged a lot of athletes down in suspensions, expulsions, depositions, trials, mistrials, lies, false allegations, and character assassination. Barry Bonds, Roger Clemens, or Mark McGwire were huge moneymakers and drew an enormous amount of media attention when they were in their prime and doping. On September 8th, 1998 I watched at a friend’s house when Mark McGwire beat Sammy Sosa for most home runs in a single season, the end of six months of real excitement and tension (for a five-year-old). If they were fucking with HGH to make it happen, so be it. Good for them for sacrificing their vascular health for our entertainment. I mean that: no pussyfooting, this is entertaining.

So if the MLB, the NFL, and all the other ones are going to cherry pick players to prosecute only when it becomes public or politically impossible to ignore, then there should be some salad bars and paninis happening at the games. If you’re going to only give us the option of poison, please allow the players to make the games more intense, exciting and superhuman, because these guys obviously will do it and take crazy drugs to play great. So what if the rest have to catch up if the majority uses PED’s? They don’t make you invincible. And really, greenies? Adderall? A little orange? These guys have a rough schedule, let them do their thing. Maybe if they install an Urban Outfitters in the club level guacamole will be encouraged. It’s just rough, man. I will say I saw a Burgers/Fries stand I’ll check out next time. This is all from a non-fan. Reporting out.