Inanity at the Big Box: Buying Junk You Know You Don’t Need 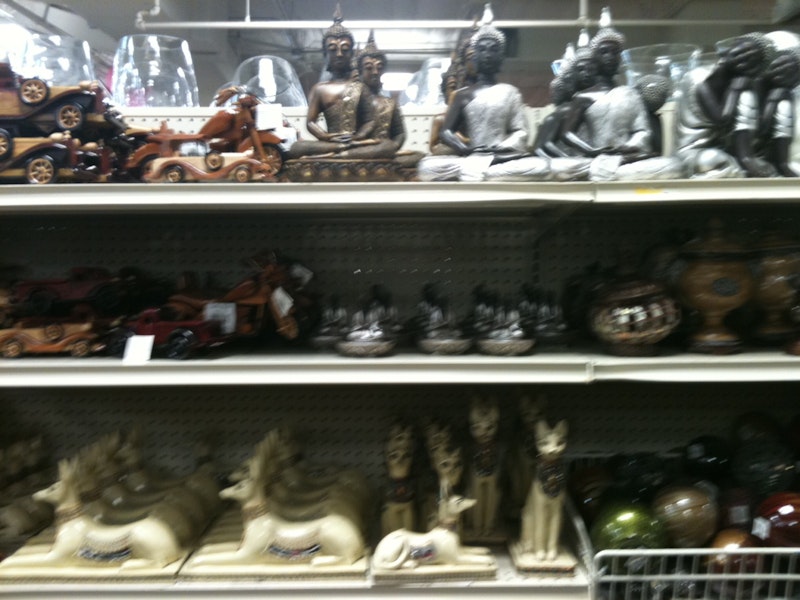 Retail design consultants are paid handsomely for a reason: their core role is to soften and anesthetize the experience of drifting through large interior spaces in a daze, purchasing things that we don’t really need. Retail design consultants are why the most pointed complaint many of us can muster about, say, IKEA, is that shopping there is comparable to being a doped-up laboratory mouse navigating a colorful maze.

Even money says that nobody at Garden Ridge HQ has ever paid for a single retail design consultant’s lunch. Garden Ridge is like a lot of other fading big-box store chains in America; they peddle mass-produced, inferior versions of stuff you’d pay a bit more for and be happier with at a specialty store or WalMart: your T.J. Maxxes, Burlington Coat Factories and Big Lotses.

Garden Ridge takes the idea of stores like those and explodes them to the size of four or five football fields, arranged willy-nilly and signage free, with roughly 10 times as much of something than anybody really needs, but then doesn’t provide a realistic staff force. Who says that one aisle of scented candles is enough? Why not two and a half aisles of scented candles? A pillow end-cap display, you say? Not extreme enough. Why not go gonzo and dedicate an entire wall to pillows—orthopedic pillows, cushions, throw pillows, monster-sized pillows, tea-cozies, dog beds, fabric so that you can make pillows, if you so desire, much of it contemptuously vile in nature? The average Garden Ridge has enough hot-pink carry-on suitcases to outfit every Girl Scout in the great state of Texas. The modern, plastic kitchen gimcrackery on display will restore your faith in the ability of underpaid third-world workers to produce awe-inspiring quantities of junk, and have you humming the song below to yourself as you riffle through piles of literary overstock on offer:

“Junk”—that’s the Garden Ridge watchword. Which isn’t to say that the store isn’t worth anyone’s while: on a recent visit, the fam and I scored microfiber towels, a large umbrella, a lunch bag, and one of those blue freezer packs one uses to keep the contents of one’s lunch bag reasonably chilled, among other reasonably priced incidentals. But for every two items a consumer might realistically purchase, there are three high-kitsch monstrosities: a thatch imitation bamboo poles priced at $4.99—a sum that only serves to accentuate their fakeness—acres of plastic flowers, miniature decorative Dr. Who-esque phone booths and vintage gas pumps, vulgar Eastern vases and what look like Egyptian cat idols and tacky representations of various exotic gods. Did I mention that Garden Ridge is massive, and unorganized, and it’s difficult to locate staff to guide you along? All of that is true.

The Garden Ridge experience is one of gawping, shock, the sort of existential exhaustion where to fondle something available for purchase is to imagine it already slimed and half submerged in a landfill or broken and overlooked at someone’s garage sale. It’s never very busy there, and each area feels like its own separate nation state—albeit a nation state where a strange plague has caused everybody else to disappear so you’re left alone drooling at an aisle full of three-foot tall clear glass vases of every variety imaginable, and you’re not so much drooling because you want one of these vases, but because you know somebody probably does, and will buy several, and that’s not a reality you can hang with. Even the air is different, somehow. The weak potpourri, the retro-racist lawn jockeys, the spread of reasonably-priced yet wholly-insipid patio and living-room furniture, the racks of cut-rate Halloween costumes: it’s all too much somehow, and if you suffered a coronary in any of these areas, there’d be no one nearby to watch you slowly die as ephemeral 70s pop wafts in from the PA system.