Has a more disgusting beverage ever existed? 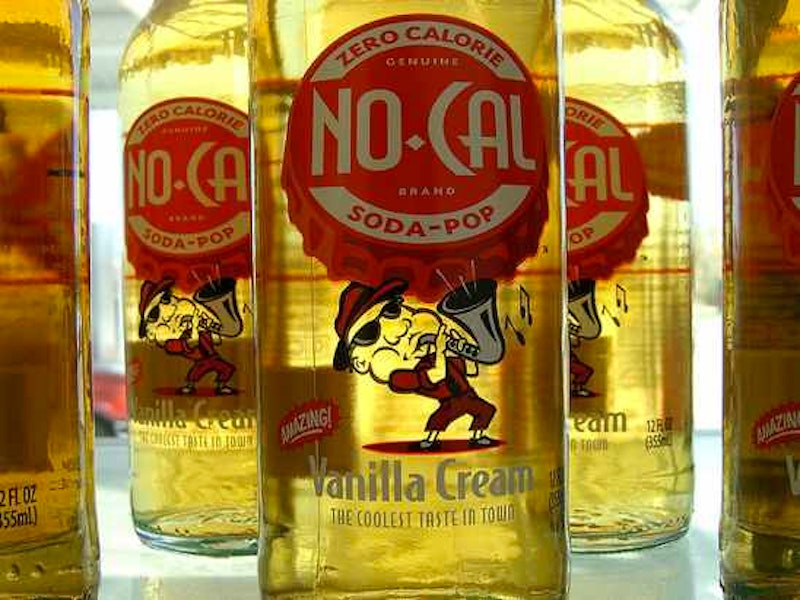 I despise diet sodas, so The Wall Street Journal’s report yesterday (“The Diet Soda Business Is in Freefall”) elicited a chuckle as I read how sales of Diet Coke and Diet Pepsi fell 6.8 percent and 6.9 percent, respectively, in 2013. I guess today there are less of the long-standing jokes about large people ordering double cheese/beef Whoppers and compensating for that excess by washing it down with a zero-calorie soft drink. I’ve no interest in the fortunes of Coca-Cola Co. and PepsiCo Inc., but do assume the lab tasters of those companies will persevere and roll out new brands, adapting to the American public’s fickle shopping habits. Or maybe not: onetime staples do disappear from the mainstream, such as Smith Brothers cough drops.

My anathema to these foul-tasting beverages is long-standing. As a young boy, not quite six years old in 1961, after whipping through an Easter basket filled with jelly beans, marshmallow chicks and chocolate bunnies, the next dentist appointment brought lifestyle-changing news. It was discovered that my baby teeth were riddled with cavities, 27 in all, and this was a job far more complex than Dr. Ellis could handle. One night I was trundled off to some medical facility in Huntington, New York, the name of which escapes me, in my green cowboy pajamas, and was soon put under as the doctor did his work, a procedure I’m told took several hours. I awoke the next morning with a set of choppers that were blackened by fillings, as well as two silver crowns. It was an ugly sight, I guess, but I didn’t think much about it. In fact, as one of my first etched-in-brain memories, it was pretty cool when the doc told me to count backwards as the anesthesia was applied. When you’re that age, the very small chance of prematurely getting shuffled off to eternity as a result of some mishap just doesn’t occur to you.

No, the severity of the situation didn’t become ugly until a few days later when my mother announced a new soda policy to my four brothers and me. Henceforth, she said, we were allowed just one soda a week, and it wouldn’t be the cheapo store-brand colas she usually got at the local Bohack’s or A&P. Instead, we were introduced to the purgatory of No-Cal—this was before Coke and Pepsi got into the diet soda business—a long-forgotten beverage that was created in 1952 for the benefit of diabetics. My two oldest brothers, young adults, weren’t really affected, since they came and went, and probably preferred beer to soda at that point, but the other two, under house rules, were quite cross with me for messing up their snacking regimen. Who could blame them?

I can’t recall how long our mom was able to enforce this diktat—could’ve been a year or more, but it’s all in the cobwebs now—but it pretty much sucked. We were in the junk food hoosegow, and needless to say, all candy was verboten, although the other boys were spared that hardship. Funny thing was, regardless of just how awful the No-Cal tasted, we’d usually look forward to that one bottle each week, usually reserved for Saturday nights. On occasion, we’d jump the gun, maybe on a Thursday for an episode of The Twilight Zone, and then be left dry for the weekend.

Anyway, as I noted, mom eventually gave into pressure and the No-Cal rule was relaxed—one became two and then three—and finally retired and it was back to cans of orange soda and root beer that cost eight cents apiece. Later on in the decade, when Diet-Rite Cola, and then Coke and Pepsi diet six-packs started filling the shelves of supermarkets, I never touched them. The taste made me gag. Still today, on the rare occasion that I order a Coke at a restaurant, I can tell immediately if I was mistakenly given a diet soda. My wife and kids, who have no aversion whatsoever to these monstrosities, doubt my taste-buds, but I’m always right on this score. It’s said that years after the diet sodas took hold, the formulas have improved and people can’t tell the difference between them and the real thing. Baloney. They’re nasty concoctions and if, by some chance Coke and Pepsi see further slippage, I, for one, won’t give a shit.