Sealing the Deal in a Third World Country

Kathmandu is an exhilarating shock. 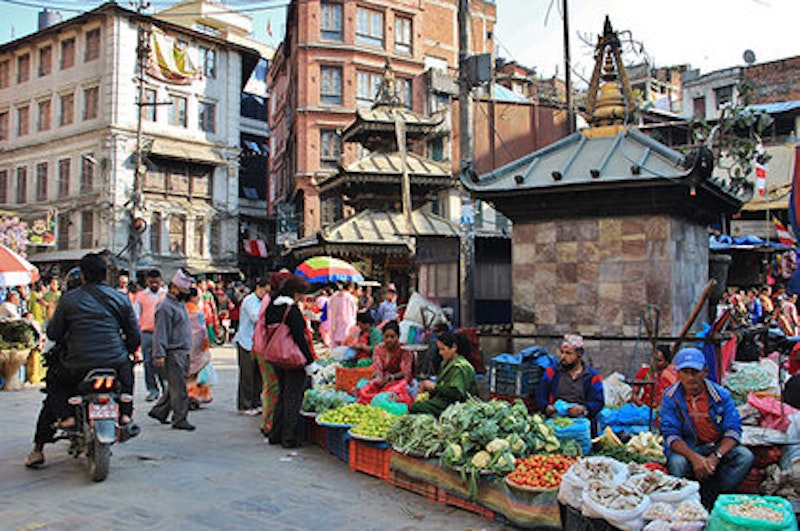 I changed my Facebook profile picture to one of me with two Indian women in a tiny colorful shop. It reminds me that two years ago this month I was in Nepal on an unforgettable trip of utter confusion.

Arriving in Kathmandu, Nepal is an exhilarating shock. It’s a chaotic, noisy and smelly city. The narrow dirt streets with no sidewalks are flooded with people, piles of trash, cars with beaten-up motors, rickshaws, skinny chickens, dogs and cows. Navigating the town is a daunting feat; doing business there is an even greater one.

Finding a primary business contact in the capital city is like walking through a maze. One turn opens to another and another and you find yourself dead-ended. It’s frustrating. You can’t just click on Google and bring up manufacturers and wholesalers. You get led to sketchy places, see random wares you’re not looking for, or have tea behind a curtain while talking to someone’s uncle’s brother’s friend who wants to sell cheap goods at inflated prices.

There are always gatekeepers who want their share of the deal and getting past them can take time. After several days in Kathmandu, I got lucky, sidestepped a gatekeeper and was turned on to a head honcho. In Nepal, there is no concept of time. There is only “come back tomorrow.” When tomorrow finally comes, three days later, it’s a bizarre ordeal.

Mine started when I was met at my guesthouse by a stranger in a beat-up rickshaw. I was led through back alleyways and unmarked streets to a concrete building and up a few sets of dimly-lit stairs. I was taken into a room filled with barefoot men sitting on the floor sifting through piles of silver. A bearded man sat at a card table with a monkey tied to it. An empty chair was beside him. Nervously, I walked over to the man. No introduction was made, but I made it clear I was there to do business.

After an hour of looking at sample merchandise and mostly non-verbal negotiation, all I was left with was the Nepalese head wobble. Which told me nothing. Another “come back tomorrow” was offered and a polite, smiling “Namaste.”

I went on several other similar excursions and left with no money, no paperwork and sometimes no names exchanged. I was ready to give up hope when, amazingly, on the day before my departure, it all came together. Strangers contacted me and I was given the goods, most of them crammed in thin tissue paper packages sealed with wax. Scribbled invoices were handed to me.

I accomplished my mission but it did make me wonder. With Nepal being one of the poorest countries in the world, you’d think they would make it easy for Americans to spend cash, shake hands and close a deal. Not so. Welcome to business in the Third World.