And I made him bleed. 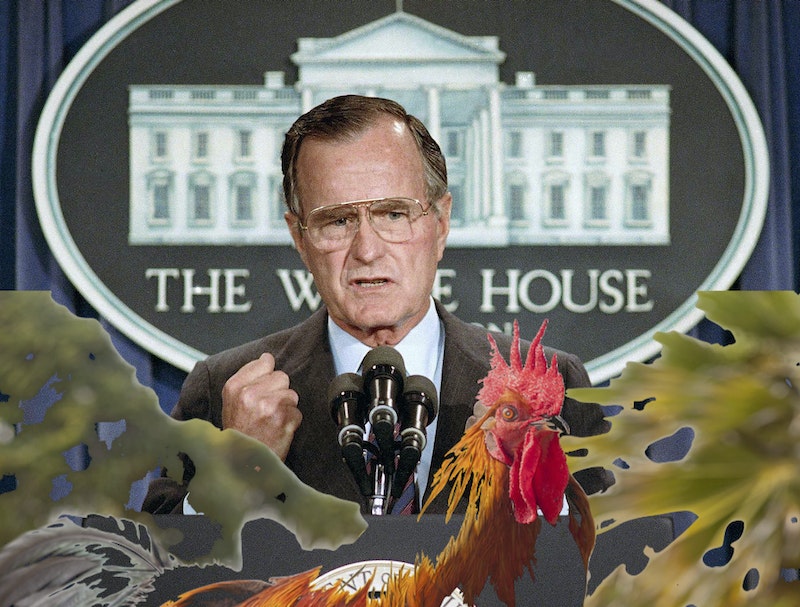 George H.W. Bush tried to eat me once, so I’m glad he’s finally where he belongs. Hell. I know I say that about a lot of people, but it’s true. Either man is a bastard mutant of Eden ravaging the Earth of its bountiful delights or I’m just an especially tasty-looking hot chicken. Oh, behave! Seriously, that WASP fuck almost got my entire family for a cookout at their ranch in Texas. Must’ve been the mid-1970s, though my memory is hazy—I’m a very old drug addict (985 days clean)—and honestly it’s hard to keep track of all the translucent lipless patricians that have tried to snatch me up over the years. Believe me, it’s a bipartisan effort; they all have a craven taste for bird flesh. At least Trump sticks to the fake shit, the genetically modified chickens (which, controversial opinion tbh, aren’t real chickens and don’t count).

I’m thinking of flying out somewhere to see the train carrying Bush’s body to Texas. I want to spit and shit on that train, maybe get a good chance at the coffin. I’d like to meet Bush’s service dog Sully, and commiserate with him, hear all the horrible things said and done behind closed doors where man assumes the animals aren’t listening. I wonder how many cheerleaders Bush raped in his final days when he was finally free of Barbara the Battleaxe. Hey, he got seven months of guilt-free trim, what’s not to love? The man lived a full life (for a man), 94 years, survived war, held just about every political office except comptroller, and always had that silver spoon up his butt. If only we could all be so lucky.

But for real though? That motherfucker tried to eat me. It was when Monica and I were travelling the country and squatting near oil fields: abandoned warehouses, trailers, national parks. Bennington told us that greenhouse gases were “good for our chakras.” This is before we were hip to new age bullshit, we had gemstones and dreamcatchers and all that junk hung up in our flophouse. So we’re struggling, scrounging for money and food, and we end up stranded wandering the sands of Texas looking for water. There was a mirage: I saw a moose; Monica saw an elephant. We were getting pretty delirious by the time a golf cart drove by and we realized we were walking on grass and finally surrounded by trees. Neither of us remember much else about the afternoon—we were either exhausted, or they drugged us. Probably both.

Next thing we know we’re in a pen with other birds. Before we’re aware or half-awake we can smell the bird flesh cooking. Everyone is panicking, squawking like mad, there’s no light. Then this motherfucker comes in looking like Mount Rushmore opening the cage and trying to pet us and shit. Monica and I were feeling pretty feral at that point so we just bit and spur-clawed out of instinct, and this gray-skinned freak starts screaming, “Oh bother! Oh bother! Golly! Golly God!” He blasphemed—that was the last straw. Monica tried to peck his eyes out but those Coke-bottle glasses got in the way. We scurried out but none of our fellow prisoners made it out.

As we were escaping, we saw the whole Bush clan seated at picnic tables, and even if it was mostly a blur, we saw the blood on their smocks. I heard that crusty fuck screaming at us from behind but we were flying, soaring like the bald eagles lowering their heads as they fly over the train carrying his decrepit body down south. Rest in fuck, George Bush. You are not missed by the animal kingdom.