Getting ready to eat something extra hot reminds me of the feeling I'd have right before jumping—equal parts exhilaration and fear. 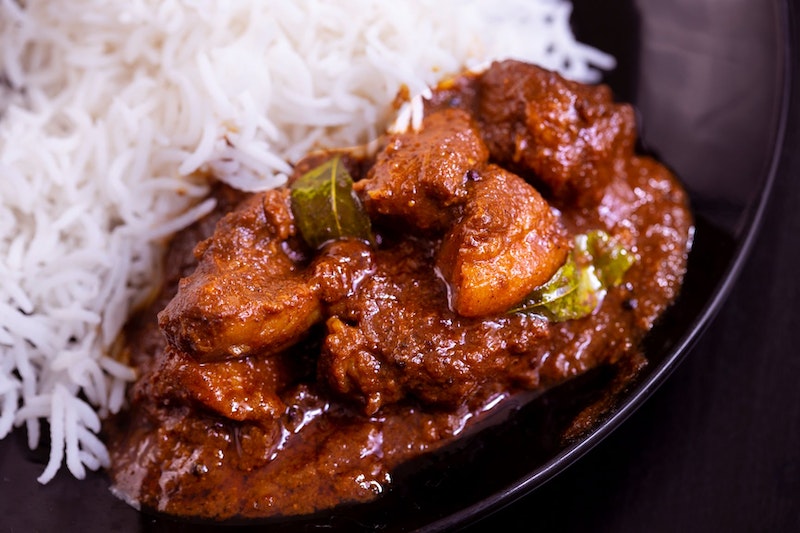 My local Indian place served me the hottest food I've ever had, and I've embraced spicy hot food for decades now, meaning I've built up a decent tolerance. Traveling in places like Thailand and Mexico has helped fortify that tolerance. Nobody's born with the ability to handle hot food. Capsaicin and other spicy food molecules deplete a neurotransmitter called "substance P," which is responsible for sending pain signals to the brain. So the more hot food you eat, the less pain's involved—no pain, no gain.

Apparently, my substance P hasn't been depleted, because when I ordered the Vindaloo "hot," which is one step below "Indian hot," it really did a number on me. Tears ran down my face (which had never happened before), my nose wouldn't stop running, and I was sweating. I was in a losing battle with my dinner, and it had me asking myself if the added flavor and excitement from the spices was worth it, all things considered?

On the flip side is the fact that when you eat chilies, it releases similar endorphins (from the pituitary gland and hypothalamus) to those of a runner’s high. Simply put, eating spicy hot food is an exciting—not comforting—experience. To employ a skiing analogy, it's the "black diamond" slope of table fare. That slope might beat you up, but it just makes you want to ski it over and over again until you can master it.

I'd had a similar experience, though less extreme, during my previous trip to that Indian place when I ordered a chicken Tikka Masala (widely considered Great Britain's national dish) I ordered "hot." After the fiery vindaloo experience, I googled "the ten hottest dishes in the world." Vindaloo was up there.

I'm reminded of when I first started enjoying Indian food, on 6th St. in New York City's East Village. That's a "restaurant row" of cheap, but good, Indian places, which suited me fine as a recent college grad on a tight budget. The single experience from those restaurants that I can recall today is ordering the Missi Roti—spiced Indian flatbread—and being blown away by the heat level. I was thinking bread could only be so hot, but it was too much for me to handle. Another battle lost.

Having spent the first 22 years of my life in upstate New York, where I never once encountered an Indian or a Thai restaurant—nor any type of restaurant that served spicy hot cuisine—didn’t prepare me for such heat. Nor did it prepare me for Szechuan cuisine. When I first moved to New York, I'd be walking around Lower Manhattan with my college friend Jim—also an upstate "hick"—and we'd see "Szechuan" restaurants everywhere. In our ignorance, we thought it was the name of a restaurant chain.

Szechuan food, while delicious, comes with its perils. I learned a tough lesson the first time I ordered Szechuan chicken. It came out with about 20 small, dried chilis on top, and I dug right into the dish, having no idea that those chilis weren’t for consumption. They were just there so that their essence would seep into the dish. That produced an unprecedented heat explosion on my palate. I was just the latest rube to bite the dust in that place, and could imagine the servers snickering together in the kitchen.

A worse Szechuan disaster was in San Francisco's North Beach, at a restaurant that had "NO MSG" written in large letters on its facade—this was at the height of the silly, debunked MSG panic. While enjoying some fiery food, I accidentally aspirated some of it into my lungs. It was the worst experience I've had in a restaurant, and for a moment I thought I might need an ambulance. The pain was excruciating to the point of panic. It gradually wore off, but that was a rough spicy food lesson.

Another lesson I learned in San Francisco while cooking with habanero peppers is don't rub your eyes after you've cut them. After foolishly doing so, without first washing my hands, it felt like needles were being stuck into my eyeballs. I gasped and panicked, but quickly realized that the only solution was to stick my head in the kitchen sink and turn on the cold water. Five minutes of that did the trick.

When you're brought up in white American culture, eating and preparing hot food comes with dangers that one only learns about the hard way. There's no parent around to teach youngsters about the potential hazards involved. No other food type presents such immediate dangers, which is part of its attraction. I've found that one aspect of the experience that attracts me is the challenge. After ordering a number of dishes "Thai hot" from my local Thai place for a few months, I decided to spare myself a bit by ordering the next dish just "hot," which is the next step down. Now I'm feeling wimpy and will probably order it Thai hot the next time, even though I know the suffering that entails.

Studies have shown that people with a propensity for hot food have adventurous personalities and are attracted to extreme sports like skydiving. I've never done that, but I used to jump into water off of some high cliffs and bridges. Getting ready to eat something extra hot reminds me of the feeling I'd have right before jumping—equal parts exhilaration and fear.