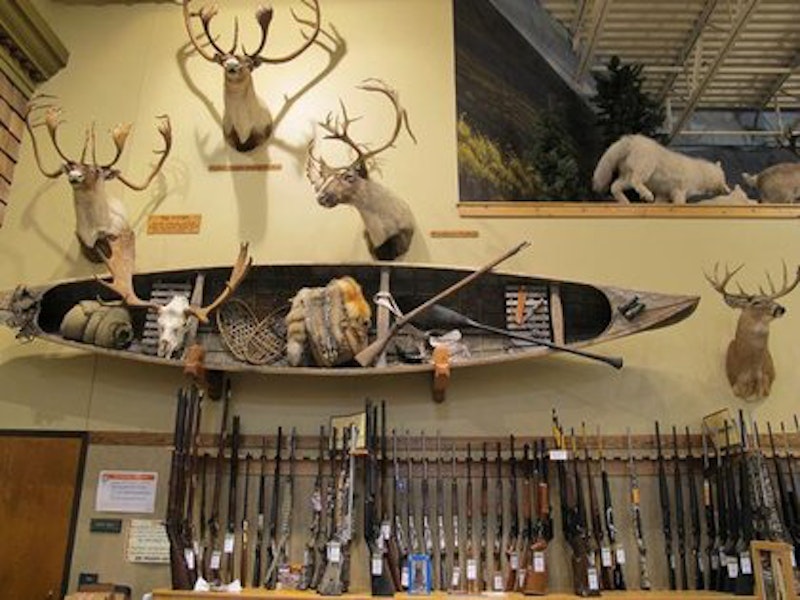 If I were advising someone contemplating a run for the White House in 2016, I’d strongly suggest that that candidate make a point of shopping at Cabela’s, and not in a passive way, but buying and wearing stuff emblazoned with “Cabela’s” and praising Cabela’s randomly in interviews. I would say something like “Senator, I know there isn’t a Cabela’s in your state, but that means that we probably need to visit the Cabela’s one state over,” and then “sir” or “ma’am,” and I would adopt an expression of grave seriousness. I’d make that trip a reality somehow, even if doing so meant killing strangers and eating their bodies, because like everyone else on Earth I crave ultimate power.

If the level of importance that I’m assigning Cabela’s is baffling, you a) lack an understanding of political demographics in the United States, and/or b) you have not been to Cabela’s. Imagine Toys R Us, Wal-Mart, and Hobby Lobby rolled into a single convulsive orgasm of mass-produced, sweat-shopped choice. Now imagine that orgasm of dedicated entirely to the outdoorsmen class.

You guessed it: thousands of square feet of knives, fleeces, bedrolls, inflatable river rafts, jerky, trade magazines, camping gear, leather boots, and diaphanous lures. You will never, anywhere else on earth, encounter so many virgin fishing rods in a single place, or so much in the way of camouflage gear or accessories. Mounted game heads—bears, deer, elk—line the walls at dizzying heights, surveying all sightlessly. A fake mountain sits at the center, dotted with more taxidermy specimens and surrounded by artificial ponds full of real fish. Wood paneling? There is no shortage of wood paneling; there is wood paneling everywhere. There is a café, and a stand where you can buy hot flavored nuts, plus a fake general store where sundries like fudge and hot sauces and preserves can be had. There is an aquarium, and, at the San Antonio location, anyway, a display that educates visitors about Texas wildlife. Would you like a mug emblazoned with nature scenes? Or a light-switch cover with a small herd of wildebeest attached, near the top? Here; have a marinated steak sample, a bland chicken sample dragged through Kansas City BBQ sauce, a square of raisin cake. Would you like another? Have yourselves another. And, trust me, you will.

In short: Q: Are we not men? A: We are Cabela’s customers. Biological wiring more or less mandates it. If shooting or netting or catching living things to feed on them doesn’t appeal to you as a matter of course—and you can include me in the heretics camp—Cabela’s can come as a kind of culture shock; it’s a little uncomfortable to be in place with enough firepower to arm a militia where so many people are, conversely, so fucking calm, perusing handguns and scopes and huge blades with the sort of élan most of us reserve for grocery shopping. But your fellow shoppers are neither overwhelmingly white nor even overwhelmingly male: the clientele is a skewed cross-section of the American populace, schlepping mindlessly up one aisle and down another in the hunt for Christmas presents, struggling so hard to keep the kids from knocking over displays that it’s tough to keep track of how much stuff is accumulating in the ol’ shopping cart. While there’s some truth to the canard about Republicans being all sawed-off white guys, it’s hardly an absolute: all kinds of folks enjoy the outdoor life, some more vociferously than others. Regardless of what side of the aisle you’re on, you can’t write off people who may happen to care way more about venison than climate change. Cabela’s is where people congregate to celebrate a particular lifestyle—an expensive lifestyle. If you’re willing to pay a premium to celebrate, maybe there’s some cash left over for political contributions.

And there are tons of fellow customers, buff and taut and gone to seed, well-to-do and down-at-the-heels, gussied up and much less so; no matter the time of year, the parking lot’s full of full-bodied pickup trucks that will never see rough terrain or haul heavy loads or serve as the locale for an epic fishing adventure, and it follows that some of those deep-sea fishing rods are destined to serve as den decoration and mid-life crisis dick-measuring tools. Sure, everything’s massively overpriced—we almost bought a Columbia winter cap until we realized it was $37.50—but that’s part of the price one pays for rarified edutainment shopping experiences, like Sea World: you grin and bear the cost, and remind yourself that most day-to-day retail experiences are comparably benign. Until the day comes when “benign” is a quaint contextual anachronism.