My Brief Career in Shoplifting 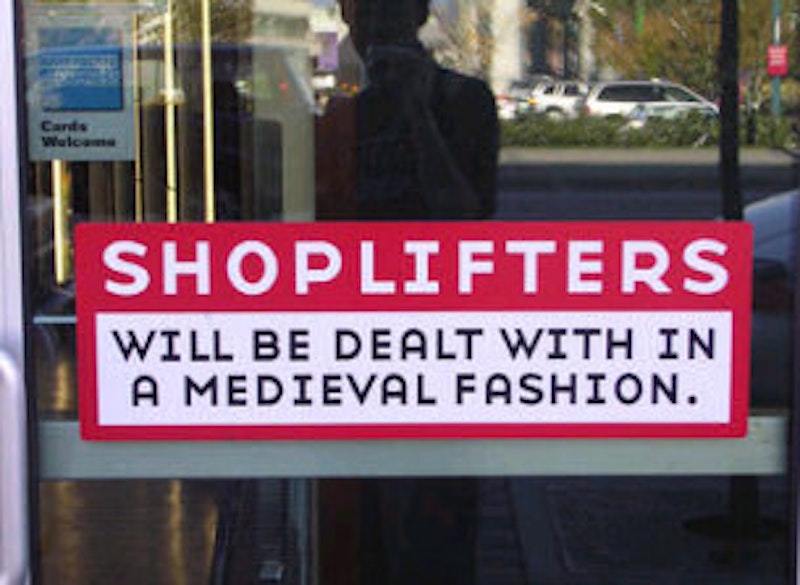 I have a confession to make, and as a recovering Catholic who hasn’t been inside one of those coffin-like church confessionals for 30 years, I’ll do it here.

I used to be a shoplifter.

I didn’t steal in regular stores, only where I worked for two years back in the mid-1980s. Gimbels department store, in case you’ve never seen the 1947 film Miracle on 34th Street, was rivaled only by Macy’s back in the pre-big box retail era.

Former stints in babysitting and as a receptionist’s assistant at our church aside, the Gimbels gig was my first “real” job and took place at the King of Prussia Mall, the largest shopping mall in the nation (in retail space it trumps even Mall of America). I worked in the accessories department selling belts, wallets, socks, scarves and the like.

Security to deflect employee theft consisted of two main strategies. First, we were required to carry store-issued clear, heavy-duty plastic bags instead of purses into and out of the store so that the guards (second strategy) could see all our belongings. We learned to bury embarrassing feminine contents amongst things like our lipsticks, tissue packets, hairbrushes and wallets. When the store closed at night, we had to walk past the undercover security guards.

As cheerful teenage girls, we were barely given a second glance by the middle-aged guards, at least in terms of the contents of our clear purses or what we were carrying over our arms (coats, jackets, etc.). It should also be noted that these guards didn’t have x-ray vision to see what we were wearing underneath our clothing, and the store in those days had no security cameras.

I didn’t lift much. I remember wearing bikinis under my clothes and stealing those a time or two. I’d put on a new pair of tights right from behind my counter and steal those. I worked in kind of a lame department for five-finger discounts. At least I wasn’t in fine jewelry. One time, I traded my beat-up wallet for a cool new preppy one inside my clear plastic purse and was terrified walking past the guards.

I knew girls who would replace all the makeup in their clear plastic purses with new makeup. There were girls who’d enter the store (during one security shift) with no coat and would leave the store (on a later security shift) with a brand new, tags-removed coat over their arm. I knew a girl who boldly left the store holding a stolen prom dress on a hanger wrapped in a Gimbels plastic dress bag; someone else’s forgotten receipt stapled to the outside of the bag. The security guards all knew us, and never asked us to show receipts anyway.

Yes, there were those annoying cream-colored plastic security pins on all the store’s items. But needless to say, we had access to the gadget that removed the pins… right at our counters.

I’d gone to Catholic school for eight years prior to this job, and developed the kind of guilt that only fear of hellfire and damnation cultivated in a Jesus-loving-nun driven environment can create. Stealing? Was definitely a commandment.

So why break commandments and risk losing my job, not to mention the potential for a trip to jail? All I can think of is that it was some combination of warped Robin Hood stealing from the rich corporation to give to the poor minimum wage girl who lived in an apartment complex, maybe mixed with thrill and challenge, peppered with an undeveloped teenage brain. I’m not sure.

Gimbels, which opened in 1887, closed in 1987; coincidentally the year I graduated from high school. Trust me, they didn’t go out of business because of my little shoplifting habit. But Catholic bullshit aside, I do still feel a little bad about it, and volunteer to spend some quality three-hot-meals a day time in a minimum security prison if anyone wants to come pick me up.