The Highly Profitable Disease of Addiction

A generation raised on pharmaceuticals. 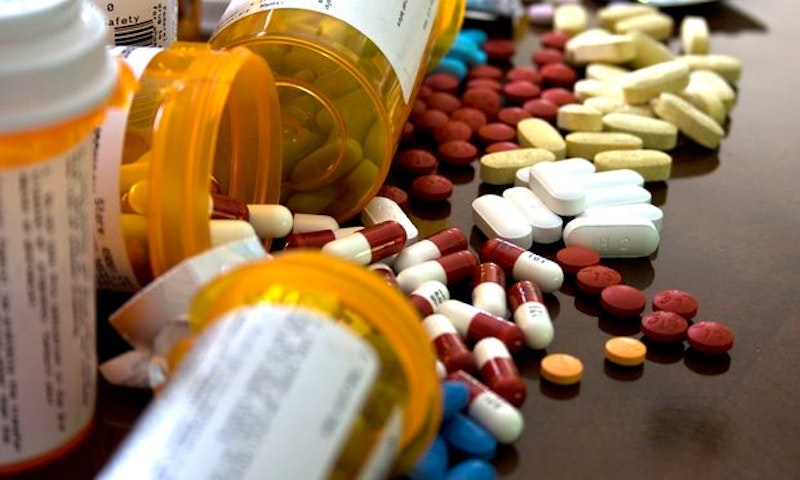 David Amsden’s “The New Face of Heroin” in the April 10 issue of Rolling Stone adds to the pile of cautionary stories about hugely profitable prescription medication. Heroin is everywhere you look in rural Vermont: Oxycontin has become a lot harder to get and a lot more expensive. Dope is cheap. Out-of-state smugglers and dealers have set up shop in trap houses and motels in a sparsely populated area with a huge demand for cheap opiates. Methadone and detox clinics are under-resourced and constantly slammed, often provoking protests from locals who don’t understand addiction and don’t want to pay for a public health facility.

The story fits in with the dozens and dozens of similar drug destruction and survival pieces that are sadly familiar: pretty young girl who had everything going for her, pretty young boy who was abused and traumatized as a child; the rich, the poor, the middle class. The specifics hardly matter when it comes to drug addiction. It’s not rational and it’s a pathology of the brain. An addict’s brain wants to use above all else, and this fact is too much for some people to understand. They stick with an immediate instinct, that drug use is a choice and it’s your own fault if you’re a drug addict. This is a human rights issue impeded by dumb people with big mouths. Bob Bick, a rehab supervisor, sounds weary and “frustrated” by a “myopic view of the situation”: “Turn on the TV and you’re assaulted with ads. Pills to give you an erection. To make restless-leg pain go away. To eliminate headaches, back pain. But when people turn to substances that we don’t condone? We stereotype and stigmatize.”

The idea that marijuana was a gateway to heroin addiction was a diversion to instill public faith in pharmaceuticals. Adderall turns 18 this year and a generation of kids have been hooked on speed for the majority of their lives. The Bond-villain level multi-year plan by Adderall maker Shire was detailed in The New York Times just a few months ago. Sales of stimulants have quintupled since 2002, and the advertising has been tiered to grow with its customers: there’s the infamous ad for Adderall from 2002 that showed a mother and son playing happily, with the caption “Thanks for taking out the garbage.” It’s Monty Burns, so black you laugh at this inhumane campaign. Amphetamines are highly addictive, dangerous, and easily abused, but they make people do things and kids do their homework. Speed is so widely accepted because of deceptive and manipulative marketing. Name brand or in a brown paper bag, swallowed twice a day with a meal or crushed up and snorted at one a.m., it’s a hard drug.

The neurological genocide by Big Pharma won’t end any time soon because it’s enormously profitable and co-dependent with other hugely profitable complexes. It’s the slow lobotomy and chemical hospice of a population that will be greatly reduced in the decades to come, from famine, drought, natural disasters and collapsing infrastructure. The tip of the iceberg that we’ve seen, how these pacifying drugs are marketed (not just stimulants—benzodiazepines, opiates, SSRI anti-depressants), and how many people are medicated, is alarming, not like you think you left the microwave on alarming, more like we live in a trashy sci-fi paperback than whatever we thought this was.

Here’s a thought for Drug Abuse Resistance Education (D.A.R.E.): show the 1981 movie Christiane F. at every presentation. Teenagers will respond this movie and at least get an anti-drug movie that isn’t wrong-headed, poorly-made, sensationalistic, boring, or condescending, and shows drug abuse exactly for what it is: a sliver of fun cocooned by an endless abyss of pain, depression, and physical suffering. Christiane is barely a teenager when she starts dabbling in pills at a Berlin nightclub called the Zoo. She admonishes her boyfriend Detlev for shooting up and swears to her younger sister she’ll kill her herself if she ever shoots up. Then it’s just a sniff, then just a shot “to see what it feels like.” The descent into full-fledged co-dependent addiction is practically immediate: they both turn to prostitution to make enough dough to buy dope. They attempt detox together, vomiting blood, shitting the bed, getting awful muscle cramps and seizures. They give in, taking “just a sniff to make the pain go away,” and they collapse in exhaustion, the disgusting tableau held for emphasis: sick, sweaty, unclean bodies covered in fluids and screaming, writhing in agony. They eventually emerge looking healthier and go to see their friends who still shoot up. Of course this leads to “one more shot, just because we know we can quit now.”

Christiane F. differs from most anti-drug movies in that it never depicts the act of using as fun or glamorous. Shooting dope is referred to as a “sexual climax” by a junkie in a car begging for his own death. The amazing scene of all the kids busting into the mall at night, running around, trashing windows and stealing coins is supposed to be ecstatic but it’s already suffocated with death and decay (David Bowie’s “Heroes” plays, sped up an octave and a half, giving the usually triumphant song a nervous, ominous and speedy feel). Bowie’s best music is used (almost all of Station to Station), and his cameo playing his famous cocaine anthems after he’d gotten clean is a subtle endorsement of the film and its message, not the cheesy and repellant “Hi, I’m [famous celebrity/musician], and I’m here to talk to you today about drugs...” The film’s a cautionary tale specifically against heroin that understands its audience and does not stigmatize the users or glorify the effects of the drug itself. It’s haunting and scary, and speaks to kids. Drug addiction is an intractable brain disease perpetuated and made by companies that only care about making money.