Monica and Bennington bond while Rooster goes on “book leave.” 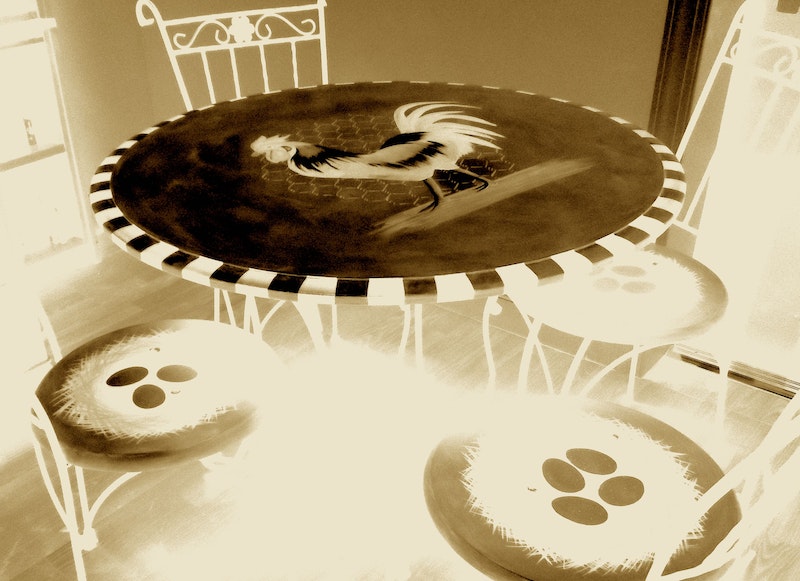 I’m making Bennington’s breakfast again. I’m not happy about it. It’s been a week; he should be on his claws by now. Motherfucker lies in hay until five in the afternoon most days. I’m not judging, but that’s not why I’m alive. I didn’t build this cabin with Roo to see it inhabited by a lazy do-nothing “reformed” drug addict and vagrant. Again, I’m not judging, but Bennington still grosses me out. We had to let him out of solitary, it was horrible and unethical, but I’m not enjoying his presence any more than I did before. He’s mean, he’s needy, he smells bad, and he makes me mad every single day. I don’t understand how one bird can be so irritating, but Bennington never ceases to surprise me.

“Can I have eggs?” I don’t think he was kidding. I gave him his grains like a normal hen and resumed the morning without comment. We watched The Today Show. We miss Matt Lauer. “He was so funny,” Benny said, “you always knew he hated the Asian one.” I told him I didn’t think Katie Couric was Asian, but I could’ve been wrong, I never paid attention to any of the women or the fat weatherman—just Lauer. What a babe. Delishus… but that’s a secret we have that we keep from Roo. See! Bennington and I are friends. We just don’t get the chance to hang out alone that often.

Rooster has been on “book leave” since last weekend. A massive relief. He’s high maintenance. He called me crazy! I told him to go bother off and sulk in his hotel room while he researches the Paris Catacombs. Bennington just parroted what Rooster said and called me crazy, too. That’s when I lost it. “Well YOU were the one doing weird drugs and having strange sex underneath the subway system of NEW YORK CITY!” He told me there was no need to get hysterical, so I spur-clawed him. I made him bleed, just a bit, and made him cry, just a bit, just to show him I could. Because he has to know. I’m the boss of this house. I wear the pants in this family. Rooster can write about French skeletons all he wants, he’s not the one making meals and planting seed—and taking care of his deadbeat husband.

I know I need to learn to have more empathy for addicts and recovering addicts. It’s not something I’ve ever suffered from, so I can’t relate. I don’t understand why someone can’t just stop doing something if it’s causing so many problems in their life. I don’t love methamphetamine or heroin that much, it’s just an occasional treat. Rooster has to stay away, and we just don’t talk about it. He rarely slips, and it’s never a problem, but I still don’t understand why being around hard drugs makes him so nervous. Are they going to jump out and do him? Grow up. Just say no.

“Monica, it’s not that easy,” Bennington told me over his grain. “Being an addict means having to resist the urge at every waking moment to go back to the life you led to before, no matter how decrepit or miserable.” Oh, like what? Snorting powder off some peacock’s ass? No, apparently, “Life just isn’t enough without drugs. I’m still learning. I need that lift and that pillow.” Pillow? “Heroin, Monica. H. Smack. Dope. Horse. It’s been in and out through the years, but it’s back in a big way since… maybe 2015 or so.” Hmm, interesting. Tell me more. “It makes everything feel good and perfect; and it makes everything bad go far, far away.”