Checking In With Height 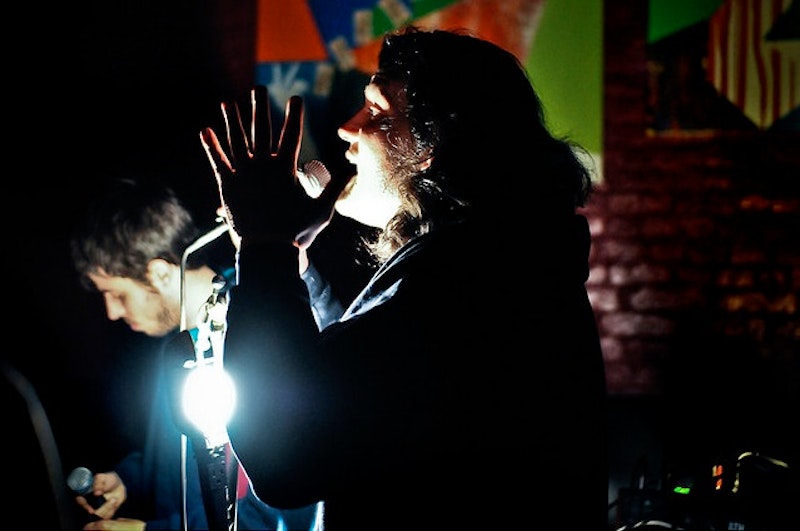 MC Dan Keech (aka Height) is a local favorite here at Splice. Late in 2009, we put out his Swiss Chard Vol. 1 EP, and since then he’s impressed us with another great full-length album, Bed of Seeds, and his recent work with the Baltimore rap super group Shark Tank (check out their debut here). I talked to Height via email.

SPLICE TODAY: It's been Height With Friends for a couple of years now, and you've always had a good working relationship with Mickey Free and some of Baltimore's other progressive hip-hop artists, so what makes the Shark Tank release different?

DAN KEECH: With Height With Friends, people come and go from the creative process at a moment's notice. Mickey and I are ultimately responsible for the albums, and other people just come in when they want and lend their ideas and skills.

Shark Tank is a four-man rap group. It's no one person's baby. Height With Friends’ music is made with a specific vision already in my mind. Shark Tank was an experiment where no one had any idea how it would end up. I know we all wanted to make a crew record where you can tell the crew is actually in a room together having fun.

ST: You started rapping and remixing in high school, right? Can you tell us about the early days: who you were listening to, what your influences were, and what kind of music you were trying to make?

DK: I was in a group called Wounds, with Mickey Free, Jones, Shields and Chris Freeland of Oxes. We put out one album and did one tour. I think the album actually stands the test of time, to some degree. You can tell we're high school kids, but not in a bad way. We were diehard Wu fans, but we were pretty open to everything.

When it came time to make my first solo album, I was compelled to make something that was sort of like Cappadonna meets US Maple. I reached that goal, but I realized I had made something that most people really don't like.

ST: I was re-reading a 2004 City Paper interview with you and Mickey Free, and it sounded like at the time you were really averse to dealing too much with the business side of things. I know it's always about making the best music you can make and trying to get it out to as many people as possible, but do you think you're more actively trying to sell your stuff at this point? Is the marketing and the promotion and all of that a bigger consideration?

DK: That article was misleading. The questions asked were, "Why don't you get played on 92Q?" or "Is it possible for nerdy white boys to succeed in Baltimore hip-hop?" At the time, I blamed myself for us not being totally accepted locally, so my answer was that we aren't working hard enough. While you can always work harder, we were working a lot harder than most people, and we've already out-hustled and out-traveled most local hip-hop acts that were around in 2004.

My business sense has grown a little bit over the years. Since that article, I've spent over 400 days on tour and booked almost all of those shows myself, as well as releasing 10 albums or EP's. I know I've learned a few things in that process, and I've done a microscopic bit better with money or press each time. I'm still no Russell Simmons, of course. I've learned the most important thing for a musician is to keep going. Don't worry about what others are doing that you're not, just plan things out so that you always have something on the horizon, whether it’s a tour or a show or an album, just keep going.

ST: Take us through the process on the Shark Tank release: from writing to mixing and mastering, how'd it all come together, who was doing what?

DK: Obviously, I've worked with Mic and Grunge for years, but doing a full-on album with them has always been on the agenda. I've had Brendan Richmond on the brain since 2004, when we first performed with him in Ontario. The idea was actually conceived while Grunge and I were on tour, listening to Soopa Villainz (we're both closet Juggalos). We mirrored their set-up of a pre-existing duo and an associated MC teaming up with one unknown guy. I liked the idea of all these different types of weird rappers being cast out of their normal roles and just kicking tight 16s.

We got together about five times over the last two years, for periods of about four days. That was about all we could do, because Brendan had to fly in from Canada each time. Some of the crucial writing and mixing got done on our own, but we tried to cram most of it into these short sessions. We would have to be extra forthright about our feelings towards each other's ideas, because we had limited time to bring things together. Mickey ended up taking on almost all the recording and mixing duties, as well as making a ton of the beats.

I always wondered what it would be like to make a full record with Grunge. He's a very in the moment type of musician. One minute he’d be telling you about a dream from which he had just woken up, the next minute you would be recording dialogue from the dream as a hook to a song (I'm referring to our song “Night-Time Men”). It was an awesome experience.

ST: What's the set-up like when you're playing live, and are there any logistical complications with taking these songs on tour? Is there stuff you can do it in the studio that you can’t do live?

DK: The set-up is always different. Almost every Height With Friends tour has had a different line-up.  Every person that joins adds something that stays in the set after they go. Brendan added the lights. Travis Allen and PT Burnem added the vocal delays. Gavin Riley and Jen Rice are currently reworking some of the set's vocal harmonies.

After this US tour, we are doing our first European tour. Given the D.I.Y. nature of the tour, it would be impossible to bring a whole band over there, or even to bring all of our gear. It's nice to have a set that can strip down to just a mic and a CD player for those kinds of situations.

The bad part about our set-up is that I'm always teaching the vocal parts and lighting cues to new people, and then having those people leave. It can feel like building a sandcastle and having it washed away by the tide. You're always back where you started. Still, it's a small price to pay for having the show you want.

Height With Friends' tour kick-off show is Feb. 25 at the Golden West Cafe, with Distubed Individuals, Mobil and R.M. O'Brien.