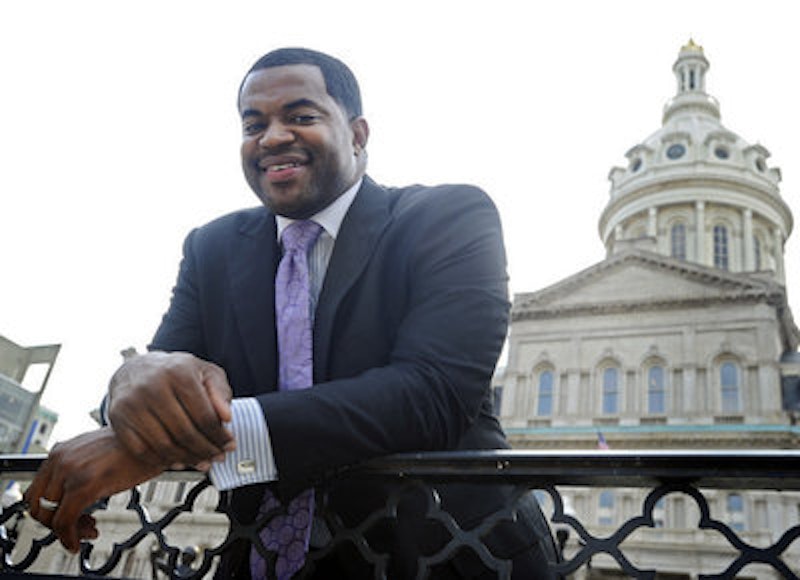 Nick and Marilyn Mosby, husband and wife, councilman and state’s attorney, are not the first Baltimore elected officials to consider the municipal payroll a family affair. It’s nice work if you can get it and they have. And now Nick is considering a resume upgrade and a salary increase. He may run for mayor, and why not, as long as the last name’s out there grabbing headlines that might translate to the ballot.

Hillary Clinton and Jeb Bush are not the only ones looking to expand their political dynasty franchise. Separate but equal entitlement to a government paycheck has a long tortuous history in Baltimore, going back as far as the mind can reach more than 65 years. Consider the D’Alesandros, Cardins, Currans, Conaways, Rawlings-Blake and O’Malleys. In a sense, the family ticket is a variation of the old name’s-the-same game perfected by yesteryear’s political bosses. These days, elected officials’ salaries are set by an independent commission.

Begin with Nick and Marilyn. In politics, pillow talk is a powerful weapon. Nick was already established as a City Council member, elected in 2011, when Marilyn, a relative youngster at 35 and mother of two, upended state’s attorney Greg Bernstein while he wasn’t paying attention to become the Baltimore’s top law enforcement officer in 2014. Nick’s Councilman’s pay is $62,918 a year while Marilyn hauls in a hefty $238,772. The Mosby family cookie jar takes in a combined $301,690. If Nick were to run and win the mayor’s job, his salary would jump to $163,365.

Mayor Stephanie-Rawlings Blake, who announced she won’t seek reelection, ran for City Council, the youngest member ever elected, and later for City Council president when her father, the late Del. Howard Pete Rawlings was at the peak of his power as chairman of the General Assembly’s House Appropriations Committee.

That was a two-fer on the government payroll, one on the state, the other on the city. And when Pete, the father, wasn’t busy legislating, he collected another government paycheck as vice president of the Community College of Baltimore. That job appeared magically after he was elected to the House of Delegates’ key money committee. Even Rawlings-Blake’s brother claimed it was his father’s deathbed wish that the son succeed the father in the House. He lost the attempt, but nice try.

Rewind to the days when it was said that a good politician was one that stayed bought. Thomas D’Alesandro Jr., affectionately remembered as “Old Tommy,” was a member of Congress from the old First District (East Baltimore) before he became mayor. He was followed later by his son, Thomas III, “Young Tommy,” who ascended to the mayor’s job from the City Council presidency by virtue of a vacancy (and an accurate vote count of supportive Council members.)

Tucked in there somewhere was a brother or two, from among the three, who held municipal cynosures, one specifically at the election board. Nancy D’Alesandro Pelosi, as everyone knows, continued the D’Alesandsro franchise. She serves in Congress, where she was once and perhaps future speaker, where her father had served and after his tenure as mayor was appointed to the Federal Renegotiations Board by President John F. Kennedy.

Before there were the Currans and the O’Malley’s there were the Cardins, of Northwest Baltimore’s old Fifth District, often characterized as the Jewish Kennedys because of their wealth, influence and prominence in politics and community affairs. Jerome Cardin was a banker and businessman who never served in public office but chose, instead, to fund those who did, kind of an all in the family arrangement.

Meyer was the invisible hand, as chief judge, who orchestrated the appointment of his son, Howard, as Baltimore state’s attorney. And most recently, Howard’s son, Jon S. had been a member of the House of Delegates, the Cardin family’s launch pad, when he ran and lost for attorney general of Maryland.

But it’s Meyer’s other son, Benjamin L. Cardin, who carries the family torch and the dynastic legacy. The youngest Maryland delegate ever elected, at 21 and still in law school, Ben rose to the House speakership and from there to Congress and, finally, to the U.S. Senate where he is ranking Democrat on the Foreign Affairs Committee.

The Conaways are another family that realized that in government service the price is right. At the highly vendible peak of their prominence there were four Conaways—father, mother, son and daughter—on the receiving end of the public payroll. The paterfamilias, Frank, served in the House of Delegates and after losing he later found a permanent home as Baltimore’s clerk of the court where he served for 16 years, once running for mayor and finally metamorphosing into a Republican. Frank’s wife, Mary, was simultaneously the city’s register of wills while son Frank Jr. served in the House of Delegates and daughter Belinda was a City Council member. Belinda succeeded her mother as register of wills (she couldn’t find her father’s will when he died) where she now works. What’s in a name? Plenty, if it’s Conaway.

But no one cashed in on family names like the blended families of Curran and O’Malley. Begin with the father, J. Joseph Curran Sr. (no kin to the legendary Baltimore political boss of the 1940s-50s, William “Papa” Curran). Curran was a co-equal boss of the old Third District’s Curran-Riscuitti faction and a member of the City Council. His Son, J. Joseph Jr., rode the gravy train from the House of Delegates, to the Maryland Senate, to the lieutenant governorship and, finally, to attorney general where he was the longest serving AG in Maryland history. Joseph Jr., retired from the attorney general’s job, only to claim another six-figure salary at the quasi-public Maryland State Workers’ Insurance fund. Another son, Robert, succeeded his father on the City Council where he continues to serve. And still another Curran, Gerald, served several terms in the House of Delegates.

And then Martin O’Malley met Catherine Curran, the daughter of Joseph Jr., the attorney general. Both were lawyers and eventually they married. Martin began his ascent in politics through the state’s attorney’s office as an assistant prosecutor. He ran and won a City Council seat and eventually ran for mayor and won as a “zero tolerance” crimebuster. Three terms later he won and re-won successive terms as governor. He is now a Democratic candidate for president. While O’Malley was mayor, his brother in-law and son of the attorney general, Joseph Max Curran III, was a patronage appointee to the Public Service Commission.

While Martin was still mayor, his wife, Katie, as she became known, was itching to become a judge. Her political connections were said at the time to be a handicap, likely the only time in Maryland history when family influence blocked a patronage appointment.

But eventually, Gov. Parris Glendening, never one to demean himself politically, relented and awarded Katie a District Court judgeship in Baltimore. And while O’Malley was governor, his brother Peter, who had served as campaign manager, held several other coveted positions on public payrolls—chief of staff to Baltimore County Executive James T. Smith and the same job with Rawlings-Blake at City Hall. Peter was, ever so briefly, his brother’s appointee as chairman of the Maryland Democratic Party. While Martin was governor and Katie a judge, the couple earned more than $300,000 a year. And incidentally, Martin O’Malley’s father was an assistant state’s attorney in Montgomery County and his mother works for Maryland Sen. Barbara Mikulski.

To complete the roundelay in a minor key, Rep. John Sarbanes currently serves in the Congressional seat once held by his father, Sen. Paul Sarbanes, the much-maligned ink-blot Third District, which is now recognizable only by its number. The elder Sarbanes used his House seat as a catapult to the Senate, where his name is affixed to the Sarbanes-Oxley bill regulating business.

Ambrose Bierce, in his cynically entertaining Devil’s Dictionary, describes politics as “public service for private gain.” Anyone who finds that appealing can run for election and follow the money.