Zen and the Art of Self-Satisfaction 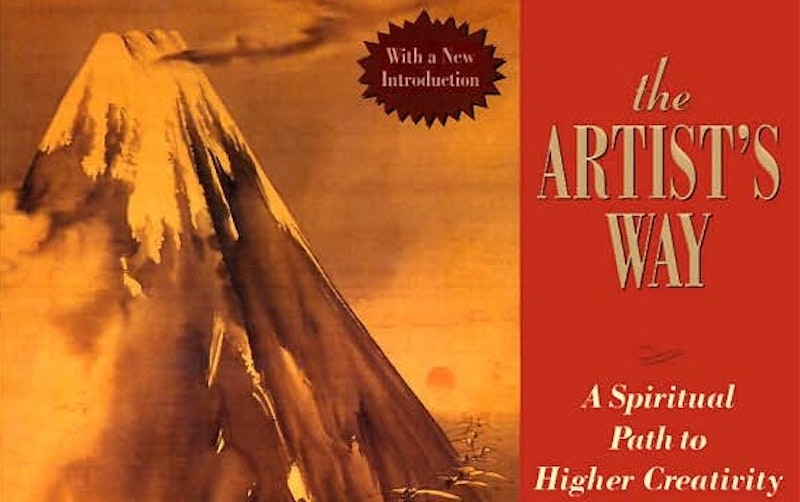 Though The Artist's Way, originally published in 1992 and marketed as "a spiritual path to higher creativity," claims "to tap into the higher power that connects human creativity with the creative energies of the universe." But what this workbook really taps into is the same old shit. More specifically, The Artist's Way sounds, at times, exactly like contemporary poetry; at other times like economic theory; and at still other times like a combination of management consultant jargon, NPR commentary, and friendly academic feminist anthropology. There are, in fact, several bleak moments in which The Artist's Way sounds like all of these. Yet despite the motherload of verbal detritus that spills from its pages, the book never once compromises its truly awesome vacuity. It seems determined to make as little as possible from as much as possible: an ambition that, while amusing at first, quickly becomes seriously disorienting. The unwary reader may begin to feel that all that he has ever read or thought has been designed with the nefarious purpose of leading him to The Artist's Way, and there abandoning him. You clutch the edges of the book a bit too hard, as if to prevent yourself from pitching forward into the page and falling forever into a bottomless and eerily familiar abyss.

The Artist's Way is written by Julia Cameron with the help of her former husband and "business creativity" expert Mark Bryan.  Cameron has an even more improbable past; she is a recovering alcoholic, Martin Scorsese's ex-wife, and a one-time writer for Rolling Stone, in approximately that order. That neither Cameron nor Bryan is an artist in the conventional sense may explain their utter disrespect for art in all its forms. They seem to hate art, with a shallow, condescending hatred reminiscent of those grammar school teachers who loathe the unfortunate pupils they so mercilessly praise.

Duplicitous philistinism is, of course, a typically American vice, and notwithstanding its Mt. Fuji cover, The Artist's Way is a very American book. Like most self-help gurus, Julia Cameron has an American belief in the efficacy of individual action coupled with an even more American contempt for the individual: everyone, she argues, can learn to be successful, because everyone is a failure to begin with. "[W]e are all creative," she tells us in one breath, and then in the next, "all of us are [blocked] to some extent." We are all, in other words, failing to live up to our full potential as artists, much as welfare mothers fail to live up to their potential as entrepreneurs. This, naturally, is where Cameron's book comes in—job training, as it were, for the aesthetically underprivileged.

Like job training, too, The Artist's Way teaches no actual skills. Cameron avoids making even the most basic suggestions about the mechanisms of art. Nowhere does she indicate, for instance, that painters should learn how to mix paint, or that violinists need to practice regularly, or that poets should, at least occasionally, read poetry. This is because Cameron doesn't think of art as a craft, or even as a hobby—she thinks of it, instead, as a health issue. If you are not an artist, you are unwell; to become an artist therefore requires not practice, but convalescence and "recovery." Cameron does not want to teach, she wants to "daub and soothe and cool," and, in accordance with this desire, she has crafted a program based loosely on her own experience with Alcoholics Anonymous. Through 12 easy steps, blocked artists recover a sense of "safety," "power," "abundance"—a sense, in other words, that they have a rightful place at the center of the universe.

This centrality is not figurative. God himself is an artist, Cameron maintains, and "artists like other artists." With friends in such high places, one might think that artists were a pretty hardy group, but this is not the case; Cameron's book takes it for granted that the artist is barely held together by "self-nurturing" and self-pity. Spend quality time alone with your own "inner artist-child," Cameron says, or the little fella will curl up and die. Buy yourself "luxuries" like expensive perfume and "gold stick-‘em stars" or your creativity will wither. Do what you want because "Artists cannot be held to anybody else's standards!" A good first act of self-assertion, Cameron suggests, might be dyeing your hair. (Cameron does not suggest getting a tattoo; presumably this would be too far out, even for artists.)

Given their frailty, it should come as no surprise that criticism is very dangerous to most artists. Some criticism, Cameron reluctantly admits, can be useful, but most is "artistic child abuse." As damaging as criticism from others is, however, self-criticism is worse. Artists need to think with their "artist brain," not with their "logic brain." The "Censor," the part of the mind which criticizes artistic output, needs to be outwitted, and the way to do this is through the "morning pages": three pages of stream-of-consciousness writing to be done every morning for the rest of your life. To write morning pages, you put down on paper whatever comes into your head, without going back over it. In other words, the morning pages are free writing, a staple of high school English courses, and a well-established way for writers to generate ideas. For Cameron, though, "morning pages" are not the beginning of the writing process; they are, rather, a metaphor for all artistic endeavors. Art comes out of people naturally and unreflectively, like urine. The artist should not think about his work; he should, as minor filmmaker Martin Ritt says, "just do it." Cameron quotes Ritt several times in her book; she also quotes just about everyone else, from Oscar Wilde to Albert Einstein to Duke Ellington. She does not, however, quote Jonathan Swift, nor James Baldwin, nor Public Enemy, nor, for that matter, any other satirists or social critics. The reason is clear enough: for people like James Baldwin art is a form of thought, a way of engaging society by criticizing it, arguing with it, and challenging it. For Cameron, on the other hand, art takes place outside of thought, outside of society, in a pseudo-Zen emptiness which would chill its inhabitants' blood if any of them could feel.

Cameron believes that the artist should luxuriate in feeling, licking his dry lips in anticipation of each original emotional quiver. Unfortunately, such quivers are rarely either original or emotional, except in the cramped, desperate way in which masturbation is emotional. Nothing exists in a vacuum, and feelings are no exception. One cannot disconnect art from society and expect it to be rewarding, emotionally or otherwise. Compare Kate Chopin, for example, with somebody like Jack Kerouac. Kerouac is arguably the better writer: he has, at least, a better ear for language than Chopin does. But Chopin's stories are grounded in American society, in the ways in which Americans of different classes, races, and genders relate to one another.

Today, Chopin is largely ignored while Kerouac is a cultural icon whose banality and glibness seem in large part responsible for his popularity. Certainly Cameron's banality and glibness have stood her in good stead: The Artist's Way has made her a millionaire. American artists, it seems, desperately want to believe that they are outside society—that they are, on the one hand, persecuted by their culture and, on the other, that they are connected to a secret, special source of power which makes them superior to their crass, misguided peers. Like Jesus or John Wayne, the artist wants to be both the persecuted outsider and the savior, both despised and worshipped. You must acknowledge and heal the injuries inflicted by those around you, Cameron tells her eager audience, so that you can become better than all of them.

Yet, though Cameron's artists are free of all social connections, they are also rather helplessly bourgeois. Art does not pay very well, and its practitioners, therefore, tend to be people who can afford to be frivolous. Among those who have successfully used The Artist's Way, according to Cameron, are "Edwin, a miserable millionaire...Timothy, a ...curmudgeon millionaire," and "Phyllis, a leggy, racehorse socialite." A large part of the purpose of The Artist's Way, then, is to reassure Edwin, Timothy and Phyllis that, despite their vast wealth, they are really very nice; indeed, they are enormously talented and wonderful. The reason that they feel worthless is not because they have built their lives around accruing unnecessary wealth, but because they were unjustly "wounded" by parents, teachers, and friends who told them that they could not have absolutely everything they wanted. The reason that things come easily to them is not because they are rich, but because the universe is organized to benefit artistic people like themselves. "God is unlimited in supply and everyone has equal access... we deprive no one with our abundance," says Cameron. Through bitter experience, the people of the world have come to learn that such slogans are not a promise but a threat. They know that when we say that they are our equals, what we really mean is that we will take from them whatever we desire, and that we will not be sorry.

Some might argue that all of this is beside the point. The Artist's Way is a self-help book, not a philosophical treatise. It does not claim to offer political insight: what it claims is that it will make us more creative, and that it will make us happy. Most people who pick up The Artist's Way don't want to know if the book is good or bad; they want to know if it will help them—that is, if it works.

Let me say in its defense, then, that The Artist's Way works, and that it will make you happy. Some day, I feel certain, it will work so well that, across the country, men and women everywhere will rise, write their morning pages, and spend the rest of the day brimming with creative energy. On that day, painters, writers, performance artists and filmmakers will blissfully explore their childhood traumas and arrive at public healing strategies. Policemen will be filled with joy as they inventively and playfully beat a black man who has wandered into a gated community. Photographers will take rich, zesty pictures of anorexics, and publishers will think up exciting ways to convince female readers that they should look like those models. Lawyers heady with God-flow will brainstorm ways to legally drop people from the rolls of HMOs. But more than that, I see a day when the black man who is beaten doesn't mind, and the women who starves herself doesn't mind, and the cancerous child without health insurance doesn't mind either. For they, too, will be cultivating their own creativity. The man will aesthetically modulate his screams and be happy. The women will stick her fingers down her throat, vomit in an attractive pattern, and be happy. And the child's brain will be slowly, inevitably, and painlessly eaten away, as across his face spreads a comforting and meaningless smile.