You Provide Your Own Power 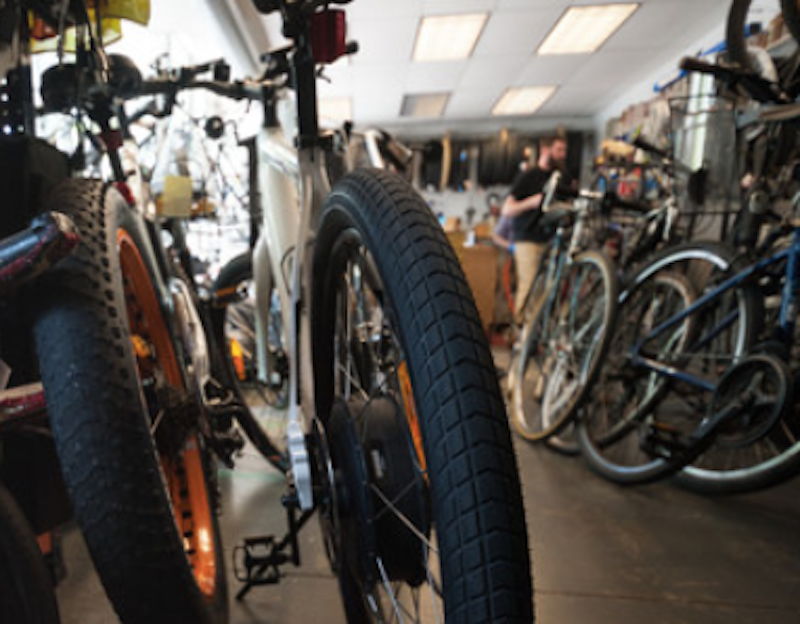 I couldn't find the bicycle repair shop I was looking for the other day, so I called the place and asked the proprietor for directions. But, as I found out, Stuart (I'd learned his name from a previous phone call) wanted his customers to find him all by themselves, without his assistance. When he picked up, I said, "I'm on your street, but can't find you." That elicited a full 30 seconds of silence as he stewed in disgust at the apparent idiocy of the query. When I asked if he was still on the line, Stuart sounded disappointed that I hadn't hung up, and told me in the most condescending tone that I had to go west on the street, without saying anything about an address. When I got off the phone, I still had no idea where his shop was, and was wondering if I should give up.

I've dealt with some prickly people, but had never before encountered a business owner who wanted to make it as difficult as possible to help a customer. I wondered if I was being put through some sort of test. Maybe Stuart was a mad, eccentric genius of bicycle repair who'd only consent to doing his work for those hardy few who were willing to take his hazing.

I'd called Stuart because the first bike shop I'd contacted said I'd have to wait five days to get the work done. Then a neighbor told me about an "off the beaten track" kind of place he'd heard of, although he wasn't sure it was still open. I checked it out online, where it said the place was "permanently closed" because bike parts from China had become too hard to get during the pandemic. But I called the number anyway, and the person who answered—Stuart—told me to bring the bike in the next day, which was great. In the morning, I called him again because I'd seen two different addresses listed online for his establishment. But bringing this to his attention upset Stuart, for some reason. "I don't know what the hell Groveland Ave. has to do with my business!" he said, sounding like he was looking for an argument. I wasn't, so I told him not to worry about it and that I'd be there soon. The guy was obviously a little touchy.

When I got to his street and had an even weirder second phone conversation with the guy, I was having my doubts. I went back to the car and tried to figure out if I wanted to deal with this curmudgeon, but was leaning towards leaving. Stuart didn't sound like he wanted to deal with me, but then again I didn't want to wait four more days to ride my bike. Then I saw a large, ponytailed gentleman in shorts and a grubby t-shirt standing about 50 yards down the street. I knew right away this was my guy.

I figured why not, maybe his cat just died or something and he's having a bad day. I'll go over and talk to him and see if he'll calm down. I started off by saying it was hard to find him because there was no sign, just to establish that I wasn't an idiot for calling him. But he was having none of that. "I'm like everyone else in America," he shot back. "I have a name and an address." Resisting the urge to tell him that every business in America also has a sign, I tried some small talk. "Are we going to chat, or am I going to work on your bike," he snapped. Now I was starting to get intrigued. His "shop" was a grubby, chairless storage unit in a low-rent commercial district, but the place had four Yelp stars.

I took my bike into his tiny place and he went to work. Hey, at least the guy wasn't a phony. I could see that he knew what he was doing, and his attitude suddenly disappeared. Maybe working smoothed him out, because suddenly Stuart was a cool guy who wanted to chat. He spoke of his love for biking, and the spirituality of the pursuit, something that was enhanced because "you provide your own power."

Stuart told me about how, years earlier, some rotten people who didn't like dirt bikers riding near their house set up a booby trap of cinder blocks hidden underneath a pile of leaves. Running over that put him in the ER with two wrecked shoulders, but they sent him home the same day because he had no insurance. That incident, he told me, ended his faith in humanity. It also made it impossible for Stuart to keep working as an electrician. His rough facade was starting to become more understandable. Perhaps you become wary of all strangers when a sicko does a sneak attack like that on you.

We chatted amiably for the 45 minutes Stuart worked on my bike, and when I asked him what I owed him, he said "10 dollars." The fancy place I'd originally planned on taking my bike to probably charges $70 per hour for labor. I gave him $20. Before I left, Stuart said that he sometimes comes across kind of rough at first. I appreciated the gesture, but it wasn't necessary by that point. He's got all my future business, and I'll recommend him to others. Sometimes you have to hang in there with someone to find out who they really are.