Welcome to the World of Bizarro Fiction

An interview with Bradley Sands, Jeff Burk and Christoph Paul. 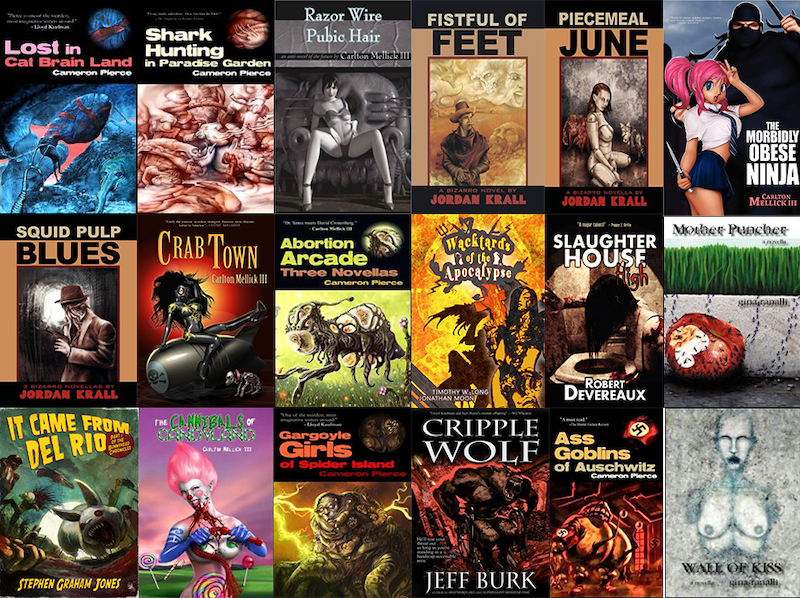 Please Do Not Shoot Me In the Face by Bradley Sands (Lazy Fascist Press).

If these books are unfamiliar to you then you’ve obviously never heard of bizarro fiction, a highly original new movement in U.S. literature. Trying to pigeonhole what’s at the heart of bizarro fiction is like trying to find a needle in a haystack—the truth about this anti-genre is buried somewhere within a wild tangle of 21st century hyper reality, self-conscious absurdity, and the timeless iconography of pulpy narratives.

Bizarro fiction is also exemplified by a close knit writers’ circle who have built a community and their livelihoods all around a deep love for totally strange storytelling. It’s only natural, then, to let some of the bizarro writers tell the story of their scene in their own bizarre yet erudite words.

BRADLEY SANDS: I’ve always written bizarro. There just wasn’t a name for it back in first grade when I wrote a story about the sentient coffee stains on my teacher’s shirt. Around 2004, I discovered other authors who were doing the same sort of thing that I was doing. The next year, an author wrote an essay about the scene, which started a discussion about what we should call the genre…

JEFF BURK:  …There is no strict requirements for a Bizarro book—just that it be weird. It can be scary, funny, sexy, gross, or any combination of those.

…during the height of pulp fiction (in the Depression era)  the concepts of genre that we have today didn’t really exist. While the terms “horror,” “fantasy,” and “science-fiction” were around, writers didn’t really identify with them…Over the decades, the genres developed specific tropes that overwhelmed them...

…the various genres (fantasy, western, romance, horror, etc…) have gotten very divided and focused on their own tropes. Bizarro is a return to the old pulp days of authors not being afraid to explore and combine whatever ideas excite and interest them.

CHRISTOPH PAUL: I enjoy writing stories that have a surreal element and have fun with genre by turning it on its head. I don't think there is one standard definition of bizarro, but it is a fitting label for writers who don't fit in a certain genre. This lack of belonging to a certain genre and being labeled "weird" makes "bizarro" a good reflection of what I write.

JB: Since the boom of communication technology, the publishers of more niche topics and unorthodox authors have been able to communicate with the fan base that was thirsty for something different.

And this is happening across all forms of media. Modern entertainment has become very influenced by the Internet’s mash-up culture. The current zeitgeist is one of taking many different pre-existing ideas and combining them together into something brand new.

JB: …There is no doubt from anyone at Eraserhead Press (the genre’s most prolific publisher) that [the bizarro scene] would not exist if it wasn’t for the Internet. The web has allowed so many people with fringe interests to meet, celebrate, and create together…The Internet has been a boon for all niche audiences. You’ll rarely find readers that only read one genre. Normally, the same interest in finding something new and different that leads people to bizarro also leads them to alt-lit, extreme horror, etc…

CP: …Interesting stories that are fun, intelligent, and entertaining will always have a place… As a reader I want something that excites me and is different. A great bizarro book always gives that feeling of being a little kid when I found a book and thought it was cool the author came up with such an interesting idea. Bizarro makes reading really fun…

JB: Where I would like to see the genre go is in more multimedia developments. I would love to see movies, tv shows, comic books, and video games adapt bizarro stories and ideas.

BS: …I think (bizarro fiction) can only get more popular…Perhaps weird writing will be huge in the future... the bizarro scene is so small. We all know each other and support one another. We also get together once a year for a convention called BizarroCon... The con is pretty much a three day party. It takes place at Edgefield (in Troutsdale, OR), which is almost like a Disneyland for adults, but without any rides. It used to be a poor man’s farm and there’s an otherworldly atmosphere to it…Most bizarro authors don’t live near each other, so it’s the only time during the year that everyone can get together and have a reunion. People also come to meet us when they’re new authors who want to get involved in the genre, and it really is the best way to do it. Few fans attend, which is unfortunate… although it’s gets more attendants each year.