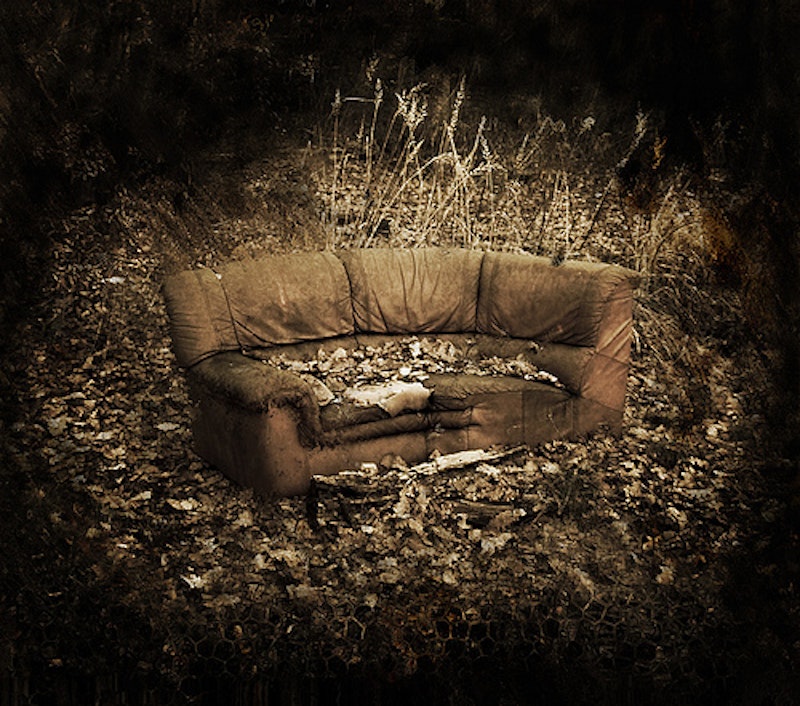 My therapist wants to talk about my drinking problem, which makes me feel like I have a drinking problem, so I interrupt her and say that my fear of upholstered furniture is getting worse. I wonder aloud if they make pills for this phobia. I could use more pills for my stash; store them along with unopened bottles of Celexa and Lamictal and Adderall and Flexerall. My gag reflex, the strongest muscle in my body, is too sensitive for pills and drinking is self-medication enough, so I don’t touch drugs. Still, I fill prescriptions and store them with my other survival gear, all part of my plan for the end-of-days. When the cell towers collapse and the oceans dry up and the black market replaces the neighborhood grocery, I’m going to trade my uppers and downers for gasoline and booze and be glad I never got hooked on pills. My therapist tells me to make an appointment with my doctor and changes the subject to my drinking problem.

While I can ignore my drinking problem as long as my hangover isn’t too bad, my fear of upholstered furniture is undeniable. And unlike my alleged drinking problem, I feel no shame about this psychological glitch. This is a completely rationale fear. Have you ever considered the possibility of contracting lice from the headrest in a city bus? Think about that next time you decide it’s too cold to ride your bike.

Despite the common sense of being wary of upholstered furniture, it is rare phobia, less common even then papaphobia, or fear of the Pope, who obviously can’t hurt you from inside his bulletproof box. The number of Google hits for “fear of upholstered furniture” is only slightly higher than the number for “at home lobotomy,” but this problem causes me serious anxiety. Unlike drinking, which I can combine with virtually any task, my phobia limits what I can do. It makes travel especially difficult. I think about taking the overnight train from North Carolina to New York to see friends and family brave enough to move north, sleep the whole way and wake up already there, but I couldn’t possibly stand up for the 500-mile ride. Besides, I’d be more comfortable sleeping on a pile of bricks than a hotel mattress, so overnight trips are out.

Unfortunately, my fear of upholstered furniture isn’t limited to upholstered furniture. More accurately, I have a fear of any cloth-like material people I don’t know have touched. I’d have to be running naked down the interstate after an oil spill before I’d put on used pants, and because I can’t afford anything new, I spend a lot of time hand-washing my one outfit, stretching the fabric’s lifetime through fashions and fads.

It’s the smell of second-hand stores that really gets me, a smell like waiting rooms with legs stuck to vinyl seats. And, like venturing into an illegal absinthe bar, you have no control over what you’ll encounter at second-hand stores. Unlike illegal absinthe bars, however, you don’t get the benefit of alcohol. In a real-life worst case scenario, a friend of mine dug through a mountain of other peoples’ trash at a Goodwill that sells by the pound, and instead of the vintage Calvin Klein windbreaker she was hoping for, she found a giant flesh-toned dildo with a foreskin and veins. After hearing this story, I started crossing the street to avoid the building, as though it were an obnoxious panhandler I was sick of refusing.

Several years ago, I moved across the country and, bringing only the things I could fit in a small but adorable suitcase, I had to set up an entirely new household. Had this been a household of one, I would have furnished my new home with a few folding chairs, but my girlfriend and I moved together. Despite my argument that sleeping side-by-side on yoga mats would be good for our backs as well as spiritually healing, she wanted furniture. My girlfriend got her way, but because we could barely afford the gas to IKEA, much less anything in the store, we had to turn to used goods if we weren’t going to eat sitting on the floor and holding bowls to our mouths. We slept on a Wal-Mart air mattress for several months before we could afford a bed and, desperate for something that wouldn’t deflate in the night, my girlfriend ignored my panic attacks and bought a used mattress, which should be illegal and is in most states, even ones where you can marry your cousin.

There were more danger zones in that house. I could deal with our used dresser as long as the drawer liners were in place, but the living room furniture made me pull out my application to the most Spartan monastery I could find with wireless. The couch became safe after I splurged on a washable cover, but I couldn't breathe near the chair my girlfriend picked up at a cheap hotel’s liquidation sale without my inhaler. After a few months of sitting on the cold floor while the chair sat empty, I decided that it would be safe to use if it was covered by the quilt my mom gave me after my power was turned off one winter. The chair was a comfortable break from the floor, but once the quilt was on the chair, I couldn’t bring it to bed. It was the chair blanket, not the bed blanket. We couldn’t possibly sleep under something that had touched the hotel chair. My girlfriend disagreed, but I bought her a hot water bottle and a sleeping bag and she forgave my neuroses.

I moved out of that house years ago, and my home now is furnished entirely by friends and family. Things that are used by people I care about generally get a free pass from my rules. I have a futon from a friend who moved to San Francisco, a chair from my boss and a mattress from my sister, which is especially safe because we have DNA in common. The only furniture I avoid is a couch given to me by a friend. Considering that this friend wears vintage shoes without socks on, I probably should have realized her couch was rescued from Craigslist, but I didn’t ask until I had taken my front door off it’s hinges to move it inside. I kept the couch, but I sit in the chair instead, longing for afternoon room naps from across the room.

Right before the session ends, my therapist tells me that I need to change my routine, to do something everyday that scares me, and I say that I will. When I get home, I’m going to lay on that couch without even a sheet to protect me from its second-hand fabric. I’m going to lay on it so much that it becomes mine, as safe as clean towels and new pillows. This phobia started small, with a story about lice from bus seats and sex-toys in piles of clothes, and I’m going to sit on that couch until it’s small again. I won’t be like the woman so terrified of footprints in her carpet that she drags a vacuum behind her as she walks through her house. I won’t be the woman who can’t leave the house because everything out there is so terrifying, so toxic, so out of control. I’ll get over this fear so that I don’t someday find myself in the middle of my living room with a cache of pills, not touching anything, with nothing to sit on but a case of beer.