The slightest breeze was welcome. 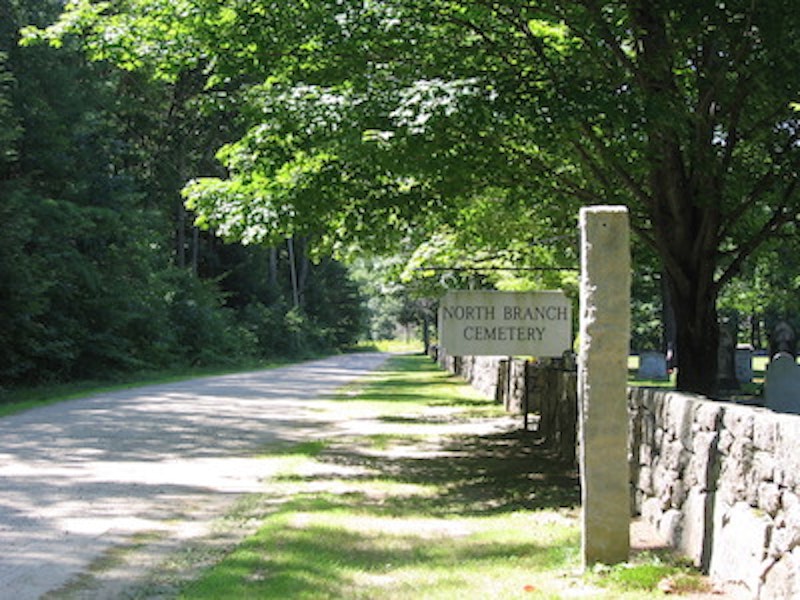 The voters of Antrim, New Hampshire elected me a Cemetery Trustee in 2018. I’d help two other Trustees govern the town’s four public cemeteries. It’s meant receiving occasional telephone calls from relatives of deceased persons who wanted to be buried in Antrim. Among the usual reasons for this are that the deceased was born or spent many happy summers in the town. The callers generally asked about getting the grave dug (I gather the correct term of art is “opening” the grave). I referred them to a pleasant, good-natured, and compassionate gentleman with a backhoe who performs this office for a funeral parlor in the neighboring town of Hillsborough and for anyone else in the area who needs his services.

Antrim’s public cemeteries are Centre, Meeting House Hill, North Branch, and Over East. I visited them all before my election: the town’s Department of Highways had maintained them well. Three of the four are full, with many dark gray, heavily weathered slate markers from the 18thand 19th centuries. Only North Branch is active, which is to say new customers are welcome. It’s a 10-minute walk from my house.

Recently, after a friendly and sympathetic chat with an older woman who wishes to bury her son’s remains here, I strolled down to Cemetery Road, a well-kept dirt road that borders our property, just beyond an unnamed stream that flows from my land toward Steele’s Pond and the North Branch River. It was amidst the heat wave in mid-July 2019. The slightest breeze was welcome. As is usually the case with rural dirt roads, the trees lining both sides of the right of way had grown tall and large enough to form a kind of green tunnel, which I found beautiful and soothing.

Some of the older trees toward the top of the hill seemed to have grown as mirrors of one another, their upper branches entwined. Perhaps they’re ideal lovers, growing side-by-side and together, completing one another.

When we first moved to Antrim, Portia, one of our kittens, ran off one day and after searching my own land I went up Cemetery Road to look for her, calling her name. I heard a mew and a rustling in the underbrush, she popped into view, and we went home together. Some months later, Portia and her sister Jessica ran out the door together one night and never returned. They were much loved here and I hope they found a loving home: they were sweet and affectionate, though Portia was zany.

Anyway, I reached the cemetery and found the second gate open, so I entered and found my caller’s family plot. It’s large and inspires confidence that her relatives will find room there long after I’m gone.

When I was a child, my family lived at 57 Columbia St. in Mohawk, New York, the first house my parents owned. It was across from the Mohawk Cemetery. My mother occasionally noted that, whatever one might say about a cemetery, its occupants were quiet neighbors. I often walked through it. I found the markers a kind of history book, nearly all bearing the names of people whose lives were quietly lived in a small town away from the shouting and tumult of the great world.

The Mohawk Cemetery had only one distinguished occupant, Francis Elias Spinner, who had been Herkimer County Sheriff, a militia general, a three-term U.S. Representative (once a Democrat, twice a Republican) and Treasurer of the United States under Presidents Lincoln, Johnson, and Grant. He was also the first Federal executive to hire women for clerical work on the same basis as men.

He was renowned for his flamboyantly elaborate signature, which appeared on millions of United States notes. He had developed it consciously, to discourage counterfeiting. The signature appears on his grave marker in the Mohawk Cemetery. It also appears on the plinth of his statue, across the Mohawk River in Herkimer, New York, which bears this quotation: “The fact that I was instrumental in introducing women to employment in the offices of the government gives me more real satisfaction than all the other deeds of my life.”

Coming back to my summer’s day in the North Branch Cemetery, I paused for a few minutes to look north, across the valley of the North Branch River toward Campbell Mountain in Hillsborough. Then I went down the rows of stones, noting several fellows who cantered off with the New Hampshire Dragoons during the Civil War and a quantity who had served in World Wars I and II (one fellow had served in both; when I was a boy, such men and women called themselves "Retreads") and a few in Vietnam.

There were also a few Revolutionaries, mostly identified by the militia company in which they’d served. Although I know he’s buried in North Branch, I couldn’t find a marker for the long-lived George Gates, born August 8, 1753 and died December 13, 1845. He had fought at Bunker Hill on June 17, 1775, among those commanded, “Don’t fire until you see the whites of their eyes,” and helped prove, as one British officer wrote, “that the Americans, if they were equally well commanded, are full as good soldiers as ours.”

One fellow, named Tuttle (an old New England family), had a few small stones placed atop his marker. It’s a touching custom derived from the Jews: flowers fade; stones endure. Perhaps a secular meaning might be found, too: as long as one’s remembered by someone, one never truly dies. So I found a suitable pebble in the dirt road I was on and placed it among the others on the Tuttle marker.

There are worse things for which to be remembered.

The other was a bench for a member of an old Antrim family whose relatives I know. It reads:

He was the man

He didn't have to be.

There were several other benches about North Branch. They reminded me of the 19th century custom of picnicking in cemeteries, bringing the baskets to the family plots. Before Sir Alexander Fleming identified penicillin, death was a constant visitor for many families. Perhaps this custom allowed people to share good times with their deceased relatives. It waned as early deaths became less common.

The benches also reminded me of Conrad Aiken, the Pulitzer Prize-winning poet and man of letters, who retired to Savannah, Georgia, where he had been born. He often sat by his parents’ grave in Bonaventure Cemetery, at least in part for the view of the harbor and of the arriving and departing merchantmen.

He once saw a ship with an intriguing name, heading down to the sea. He did some research at the Port Authority, where he confirmed the ship’s name and looked up her destination. That information gave him a two-line poem.

His tombstone’s a bench. He wanted people to sit and enjoy a martini by his grave. On it is the poem, which is his epitaph.