Uh-Oh: A Reminder of My Canned and Frozen Past

Mom had no interest in cooking. In retrospect, who could blame her? 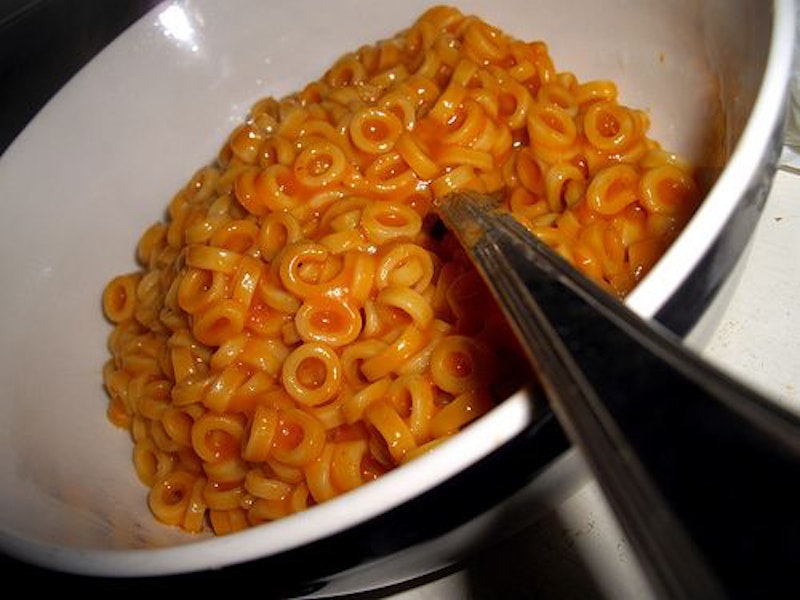 Barring the intervention of unusual circumstances, my early morning routine has remained static for years: down to the kitchen, boil water for coffee and then outside to the front stoop and pick up the copies of The Wall Street Journal and New York Times. Last Thursday, upon perusing the Journal’s “What’s News” digest on the front page, I was given a start, reading the one-sentence obituary for Donald Goerke, an 83-year-old man who has the distinction, for better or worse, of inventing the Campbell Soup Co. product SpaghettiOs in 1965. Condolences to the family, although 83 is still a nifty run, but I wish Goerke’s spectacularly successful and lucrative idea—150 million cans of the stuff is sold annually—had been scratched by some unimaginative executive at Campbell.

As you might’ve guessed, this survivor of the frozen and canned food era has eaten, and disliked, more bowls of SpaghettiOs than I can remember—even with a fine command of basic mathematics. (Michael Yockel, a longtime friend of mine, told me upon hearing the news, “You mean ‘The neat new spaghetti you can eat with a spoon’? Of course I ate it—a million years ago, mind you. With the theme song sung by the sweet-voiced Jimmie Rodgers. Who could resist?”)

My mother, bless her loving, eccentric soul, was an awful cook, and her eyes lit up at the local A&P whenever a new product designed for quick preparation was found on the shelves. Which mean instant mashed potatoes, Pillsbury biscuits, butter substitutes, Sanka, Carnation powdered breakfasts, Tang, Underwood Devilled Ham spread (which smelled like dog food, but actually wasn’t so bad), every Birds Eye product and Howard Johnson’s frozen salmon croquettes. As the youngest of five boys, I got the short end of a tiny stick at dinnertime: By the time I was growing up, Mom was, understandably, bored with cooking and considered it a more irksome chore than doing laundry or vacuuming the den.

One burned-in-the-brain memory, circa 1968, was the overpowering smell of smoke that enveloped my bedroom as I was burrowing away at a stack of homework assignments. I went downstairs and saw my mother on the couch, reading a book, and she was utterly non-plussed upon learning that a chicken she’d put in the oven a few hours earlier had been rendered inedible. “Oh, honey, just scrape off the burnt parts,” she said, and then went back to her novel. I made a baloney and cream cheese sandwich, got a glass of milk and retreated to my room, muttering.

Today, my younger son thinks it’s just swell when my wife, a culinary whiz, takes the night off and lets him have a TV dinner. Just looking at the Swanson aluminum tray he totes into the sunroom gives me the willies, since by the time I was 15 I’d probably logged well over 500 of these frozen monstrosities that were a staple of middle-class American culture. Fried chicken, Salisbury steak, meat loaf, turkey, I ate them all, always hoping that the tiny brownie or apple cobbler that was next to the peas would be fit for consumption and not undercooked. It rarely worked out. What’s more, my mother, ever the packrat, kept the Swanson tins and used them for leftovers the night after she’d made a passable vat of chicken tetrazzini or hot dogs and beans.

In truth, my childhood was rather splendid, living in a cramped Long Island house with doting parents and four terrific brothers, and if money was tight it wasn’t something that bothered me. Twisting a line from an old Joni Mitchell song, you don’t know what you have until you’ve got it. I knew only one rich kid and his family was, to use a term not in vogue 40 years ago, dysfunctional, so I felt fortunate. However, as for home cooking, I was screwed, a fact driven home on the occasions I’d have lunch or dinner at a friend’s house.

Bobby Ringler’s mother Glo was an all-star in the kitchen, introducing me to such exotica as fresh vegetables, al dente pasta (okay, the word “pasta” wasn’t used then either, so let’s just say spaghetti) and tuna fish salad that was flecked with bits of pickle, celery and radish. Bobby’s grandmother Lily was no slouch either, as she made sure I’d have helping after helping of just-baked potato and raisin kugel, apple strudel and rugelach. I passed on the borscht. As a fellow who never ate a leaf of Romaine lettuce until I was 19 or so, these occasions were treats.

Hormel’s Spam has been the butt of jokes for over a generation now, but I’m not laughing. We’d have Spam and beans every other week or so, and, unless it was fried until extra crispy, was as disgusting a meal as I can imagine. Sometimes, my mother would clip out a recipe from one of her magazines and try to dress up the Spam, most often with slices of canned Dole pineapple, but I almost always wound up feeding it to our mutt Scuttle, who regularly camped under the kitchen table at 6:30. (Sometimes my father, who never, ever, complained about his wife’s grub, would surreptitiously slip Scuttle some food too, maybe if Mom was on the trunk line, gabbing with Bernice Reilly and Laurie Howard.)

In 1975, while on a European trip with my oldest brother and his family (I was the nanny), one night we were on an overnight ferry from Norway to Sweden and sat down for dinner. Despite the exquisite Scandinavian food we’d relished—not to mention a lot of freshly brewed Tuborg and shots of Aquavit—the spread was quite ordinary and capped off with helpings of canned fruit salad. When this dessert came to the table, my brother, 32 at the time and a successful businessman, said, “This is one of the reasons I’ve worked so hard. So I’d never have to eat gooey canned cling peaches and grapes ever again.”

And I’m certain he hasn’t. So, while there was a mini-burst of nostalgia found on the Web after Mr. Goerke passed away, this middle-aged reader was having none of it, since the jingle “Uh-oh, SpaghettiOs!” still turns my stomach.