And other thoughts on spirituality in India. 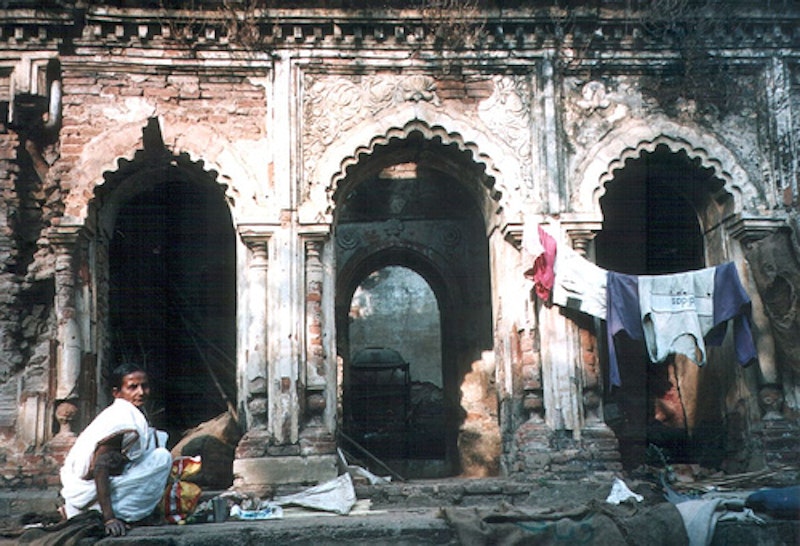 The old, frail man bent over my hand and narrowed his eyes. He stretched, prodded and squished my palm. He pulled the edges of my hand, poring over the crevasses and folds intensely. He looked up for a moment, abruptly, and went back to the hand. He studied it for a minute or two more, as we sat in silence in a friend’s office. Head still down, the man began speaking softly, in a sweeter, clearer voice than the deep lines on his face had led me to expect.

His tone was that of a guide at an art museum, quietly describing a painting for an elderly tour group—measured, steady, maybe even the slightest hint of surprise as if seeing something new in the painting every time. Earlier in the day, my friend had told me about an employee in the factory he owns, an old “pandit,” a member of a priestly caste. He said this man could read palms, read your past and future—a learned skill passed down to him through generations. He assured me of the old man’s legitimacy and accuracy, and everything he’d been told had come to pass. I sat as he translated the old pandit’s quiet observations. The first couple of things sounded nice, pleasant assurances for the future. Then, he said something that wiped the slightly bemused smile off my face. The old man—in clear, explicit language—described something from my past that has always haunted me. He mentioned something else; something deeply personal that I never speak about. He went on and discussed moments in my family’s history in unsettling detail, stuff I keep from virtually everyone. He told me my past. He told me my future.

India has many faces. It’s a study in development economics, multiculturalism, 21st century geopolitics, 20th century colonialism, democracy and terrorism. For the business-inclined, there is the opportunity to cater to a billion wallets, slowly swelling with rupees. But there is yet another side, a side far from the halls of think tanks, call centers and NGOs. It’s India as a holy land.

Over the past few months, I’ve met three archetypes of Westerners. The first group came with a clear goal, whether it be working for an NGO, studying politics up close or learning the language (I’m part of this group). Next, you have the business class, hidden in gated neighborhoods, the only Westerners you really find in suits. Then there are the backpackers, the people who came to India looking for something.

While I’m in India to explore the culture, I didn’t run away from America. Indeed, parts of my daily existence are still deeply-rooted in my far-away home. I read American newspapers, watch American television shows, and talk to my American girlfriend and family just about every day. And then, I come across backpackers who haven’t so much as glanced at a newspaper in months, living in suspended time away from some perceived “real world.” In my travels elsewhere, through Europe and the Middle East, I’ve never encountered such a concentration of people who just up and left home with little but a one-way ticket and an idea in their heads. On trains, in hostels, in restaurants, at tourist sites—I have spoken with several Westerners that came with no plan at all, other than, you know, be in India. I’ve met people who quit their jobs just to tour India for a few months, people with children, people with responsibilities.

When these people hear what I’m doing—tutoring children and interning for a nonprofit—their first response has been quite uniform: some sort of, “Oh I was hoping to do something like that while I’m here. Maybe find a village in the mountains and help them. Bring them food or teach them or something.” They say this, they size me up, and then I feel a small distance between us, their eagerness to chat dampens. Maybe they think I’m a suit. Maybe it’s some sort of liberal guilt. Maybe it’s because I have a plan, and plans freak them out.

Spirituality is, of course, subjective. Just because I don’t feel it doesn’t mean that someone else can’t. Going to Jerusalem’s Western Wall, Judaism’s holiest site, was one of the most intensely physical, emotional and spiritual experiences I’ve ever had. Yet, I know people, who share my faith, that thought it was just rocks. When I think of India, though, this 1960s pastiche of Technicolor spiritualism is an afterthought, something I associate more with Western backpackers than actual India. When some Westerner starts talking to me about the spiritual energy here, waiting for me to agree, I find myself judging them rather than thinking about India.

I know it’s self-righteous. But my mind wanders to the several people who have told me they were “kind of Hindu” without being able to explain what that means. I think of the American woman I met, “a kind of Hindu,” who began speaking disparagingly of Muslim people in bizarre, unfamiliar stereotypes, until I realized she had adopted Hindu anti-Muslim rhetoric. The way she spoke and looked at me, I think she expected me to admire how cultured she was for thinking like a local (her rant was peppered with filth like, “You know how these Muslims are”). This thinking sickens me, as if adopting a majority’s distorted prejudice and taking sides in someone else’s conflict somehow makes one clever and worldly. Fairly or not, I find myself conflating Westerners’ hunt for Indian spirituality with being confused or inescapably unhappy about one’s identity. The anti-Western rhetoric I’ve heard from many of these people certainly hasn’t helped dissuade me.

Yet, this lost-soul spiritualism obscures a more curious phenomenon. After all, I had an old priest—whose day job is in a garment factory—tell me several things about my past with 100 percent accuracy. Whether this constitutes a spiritual or religious experience is certainly up for debate, but from my view, it was neither.

As if one experience like this weren’t enough, I had another. Friends of friends introduced me to a guru known for reading people’s auras and energy levels. He, too, was a member of the pandit caste, his skill passed down through his family. He couldn’t read palms or tell you events in your past or future. What he said he could do was see who you, as a person, used to be, who you are now, and who you would be. I was significantly more skeptical about this. Auras and shit like that starts tipping the ridiculous scale as far as I’m concerned. But then he spoke, and in many ways this was an even more unsettling experience than the palm reading. The things this man told me about myself, ways I used to be, ways I am, how I’ve changed, all in unbelievably straightforward and clear language, shook me up. He saw pieces of my personality I thought I’d hidden away forever.

When you’re talking about a palm or aura reading, it smacks of supernatural mysticism at best or Miss Cleo hucksterism at worst (it should be said that both readings I had were free). If religion had come into either, talk of possession or demons or gods, I would have instantly been skeptical. But they were different. They were supernatural in the sense that they existed outside the realm of science that I ascribe to, but these were totally secular experiences, exercises of a learned and inherited skill.

Unlike most other parts of the world, India’s traditions have gone relatively unperturbed since the birth of Hinduism some 5,000 years ago. You could say the same about certain tribal areas in South America, Africa, or Asia, but nothing on the scale of India. As opposed to Islam, Christianity, or Judaism, which attempt to put forth a specific and uniform guiding principle, Hinduism accepts and encourages the maintaining of old traditions. The pagan traditions of the Middle East and Europe were all but wiped out by the spread of religion. While many conquerors came and went in the Indian subcontinent, none was able to uproot local beliefs. Islam came and while Muslims have been settled in India for hundreds of years, they were largely an addition to the land, rather than converting and erasing a previous tradition. Even British rule was arguably an urban affair, and Christianity was never enforced en masse. To this day, two-thirds of the country’s population is rural, maintaining the 5,000-year-old traditions without interruption. The existence of the caste system and the concept of dharma have ensured that specific skills, traits, and teaching have been passed down within the same professions or tasks for this incredibly long period.

So when a man reads my palm, that’s 5,000 years of teaching in his head, traditions too old for me to fathom. Maybe this longevity, hearkening back to a perceived simpler time, is what really draws those tormented souls. These are people disillusioned with the cultural creative destruction of the West, where battles over ideas result in only winners and losers, instead of both marching onward. However, this is changing now in India. Traditions are slowly coming undone, thread by thread, as the middle classes have begun striving for and achieving the ideals of Western capitalism. But for now, they still exist, side-by-side. After all, as the old priest finished reading my hand, he got up, thanked me, and went back to work in the factory.