The challenges presented by the subtle proselytizing of Hinduism. 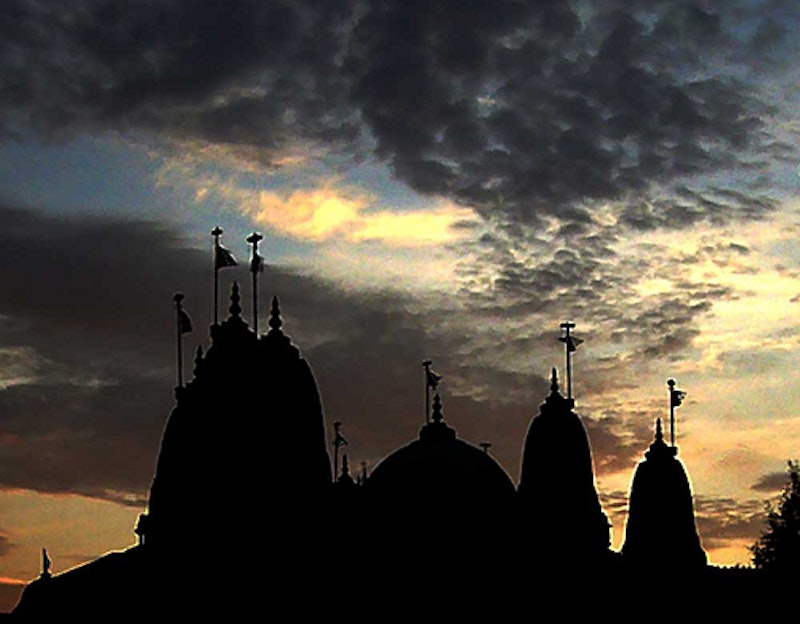 Compared to the austere confines of Europe, the Middle East and North America, India is a bright, visceral experience. The subdued pastels of Paris, the washed-out blue and white of Morocco’s Kasbahs—their beauty is just as impressive but significantly less … outrageous. India is a color explosion. Buildings, clothes and rituals are loud, melodic, and bright. When compared with the solemn churches, mosques, and synagogues that dot the world from the Middle East to the Americas, Indian—and especially Hindu—culture can seem like it came from another planet. Sure, there’s singing and chanting outside the Subcontinent, but nothing that could possibly prepare you for watching a Hindu wedding precession march past you—blisteringly loud trumpets play double-time rhythm as crowds of men and women dance wildly in the streets, boys walk alongside the crowd carrying huge and bright lanterns draped in colorful cloth, the groom rides behind the precession in princely clothing and riding on a white steed dressed seemingly for either battle or a Renaissance fair. They disrupt traffic. They keep you up at night. The whole thing is massively entertaining and equally unintelligible.

Before coming to India, Hinduism was a blank slate for me. I looked into it, read the Bhagavad-Gita, but it’s not something easily lifted from the pages of books. It’s intricately tied to the land here and, more than that, the experiences associated with it are nearly impossible to reproduce abroad. You can light a menorah or unroll a prayer mat anywhere in the world, but you can’t throw colored dye at your neighbors like you could on Holi or bathe in the Hudson River instead of the Ganges.

Grasping Hinduism is a bit of a Sisyphean task. Everything one person tells me gets completely contradicted by someone else. I know that Hindus aren’t supposed to eat meat on Tuesdays, but no one has yet given been able to tell me why, even though they follow the rule. People have told me that there are 800,000 gods. Others claim there are 18 million. I’ve seen Hindus praying at Muslim and Sikh holy places, following bits of each tradition. What makes someone a Hindu, other than heredity, seems difficult to define. My friends try to steer me toward their religion through traditions—not their rules or morals, per se, but the little things they do every day, like what they wear. Yet, if I were to become Hindu, how could I—without caste, without birth, without fluency in the faith—possibly fit in? That makes the vague proselytizing even more confusing for me.

I was discussing some of the issues I brought up in last week’s column with my language instructor here, an American. He said that one Westerner had, in fact, been able to tell him what being “kind of Hindu” meant to her. She said that when she was in Hindu temples, she felt the presence of God. I’ve been thinking about this a lot. I’ve felt the presence of God at holy sites—nowhere stronger than Jerusalem’s Western Wall, but I have felt the same tingle at a handful of Christian and Muslim places. I’ve visited several Hindu temples, thousands of years old, in villages and cities but, honestly, I’ve never felt the presence of God. Moreover, I’ve actually felt rather uncomfortable in most of the Hindu temples. Even now, despite having been in many of them, I get a little uneasy before entering each one, maybe even increasingly so.

This isn’t the same as the uneasiness I got approaching the Western Wall, some overwhelming emotion or sensation that keeps me from feeling settled. Instead, it’s more like the feeling I get when I’m going to a part of town with in-your-face salespeople, beggars and touts. I have to put up the walls and tunnel vision and prepare myself to say no. A big part of this is that going to these temples is in some ways a microcosm of the Indian experience. You are faced with earnest, forcefully assertive friendliness—especially shown to foreigners. The ascetics/temple keepers/priests are eager to dot your forehead in seemingly permanent ink, feed you food of questionable hygienic standards, drape you in garland, and—frustratingly—ask you for money.

I’ve given 20 rupees (about 40 cents) and been asked for 50 rupees. I’ve tossed in 50 and been asked for 100, pressed to give on behalf of my family, nonexistent wife, existent girlfriend or friends. I’ve negotiated with these temple keepers like they were cabbies, telling them that whatever amount I’ve given them is more than enough, and they can now leave me alone. Saying no is even more awkward as they begin to treat you as if you are an unwanted trespasser. The specter of financial transaction looms over entering these temples and the interactions I have with the people inside them—much as it lingers over friendly strangers about town who could be touts.

But my discomfort is not easily cast aside as a simple dollar/cents/hassle equation. My tradition—Judaism—is one that puts monotheism on the highest pedestal, the number one Commandment. I’m hardly practicing, but I am very comfortable and happy with my faith. In Judaism—as with Islam or Christianity—worshipping idols is seen as the offense against God, one’s religion and maybe even one’s people. It is betrayal. So, despite my lack of strict adherence, I find it very, very difficult to walk into these temples—with bright golden statues, colorful figurines, and beautiful paintings of gods—and show it the reverence I feel I should as a respectful guest. Any reverence feels a bit blasphemous.

Part of this stems from something that’s haunted me. One of the first experiences with Hinduism I had was with my friend in his village. We came to a Gurdwara, a Sikh temple, covered our heads and entered. As we walked up to the priest tending the shrine, my friend innocently turned to me and told me, “Okay, so you have to give a bow to the priest and a bow toward the holy book at the center.” I thought nothing of it. I have no problem covering my head in a mosque or standing up with everyone during church. They aren’t my beliefs, but I respect the traditions out of respect for the people that hold them. I was curious to see the ins and outs of my friend’s faith. I did not want to offend him and his family, who had shown me such kindness and hospitality. I believe that part of one’s religious tradition is accepting others’ faiths without judgment. So I bowed. I have rationalized this to myself, but in truth I could have walked out and didn’t.

When people enter Hindu temples, many bow at the entrance, bow to the gods inside, and bow as they leave. I do not do these things and get nervous every time. I am still curious, I want to see inside these places, see the rituals, beautiful artwork and architecture. But I’m scared someone will confront me about my lack of respect. I feel like a peeping tom inside, waiting to get caught and exposed.

Living in India tests your beliefs in a very real way.

It doesn’t help that some of my friends have seemed puzzled by my reservations about adopting their tradition. My friend bought me a steel bangle, to be worn on the wrist as a protector from bad spirits. It was a kind, meaningful gesture, but he doesn’t understand why I don’t wear it, doesn’t understand my opposition to wearing a symbol of someone else’s religion. People have told me that—Hinduism aside—avoiding meat on Tuesdays is good for your health, something to consider. It nears on insidious, the way people try to sneak it in, the way they want you to adopt just a few customs, traditions, or beliefs. “Here, wear my black shirt on Saturday. We believe it is good luck. It shows respect to the god of Saturday.” But, despite the occasional bouts of frustration, I’m grateful. It has shown me where I draw my lines, strengthened and defined the borders on the frontiers of my belief.