The Ditmars and Ditmas of New York City. 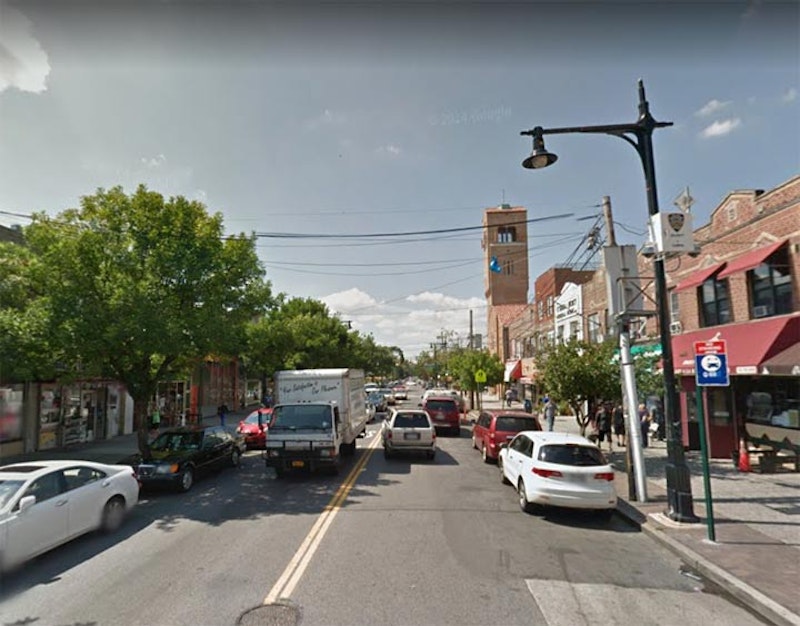 The name Ditmars, or Ditmas, appears more than once in the NYC street directory. The Bronx has a Ditmars Str. in City Island, while Brooklyn has a Ditmas Ave. through Kensington and namesake Ditmas Park, which turns into Ave. D and then continues as Ditmas through East Flatbush and Brownsville.

And then in Astoria there’s Ditmars Blvd., named for Abram Ditmars, the first mayor of Long Island City, New York, elected in 1870 (the city became a mere neighborhood when Queens became a part of Greater New York). His ancestors were German immigrants who settled in the Dutch Kills area in the 1600s.

Ditmars Ave. was laid out in the late-1800s, and during the 1910s—during Queens’ big changeover to a consistent street-numbering system—many busy roads were renamed as boulevards, and Ditmars was one of them.

On the present Queens map, Ditmars Blvd. stands in place of 22nd Ave. Coincidentally, Brooklyn has no 22nd Ave., either; its place is taken by Bay Parkway, even though the elevated F train at McDonald Ave.’s Bay Parkway station stubbornly persisted in subtitling it 22nd Ave. until a short time ago. 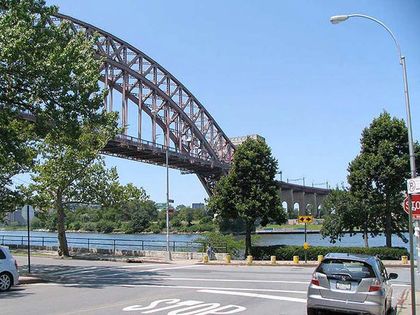 Ditmars Blvd. begins at Shore Blvd. at the north end of Astoria Park, and views of the East River and the Hell Gate Bridge are prominent here.

The Hell Gate Bridge was the final piece in the puzzle of running passenger railroad trains into Midtown Manhattan. The tubes connecting Long Island with Penn Station opened in 1910, and Hell Gate Bridge, connecting Long Island with the mainland, opened in 1916 as the lengthiest steel arch bridge in the world until surpassed by the Bayonne Bridge in 1931.

“Hellgat” means “beautiful strait” in Dutch, but it lived up to its English transliteration as an extraordinarily dangerous stretch of water. This was due to conflicting currents of the East River and Long Island Sound, as well as rocks in the strait that made it treacherous for shipping until 1885, when the rocks were detonated into rubble and the remnants built into Mill Rock. The construction was overseen by Gustav Lindenthal, who also worked on the Williamsburg and Queensboro bridges. In the mid-1990s it was painted a deep maroon, which the sun has faded to light magenta. 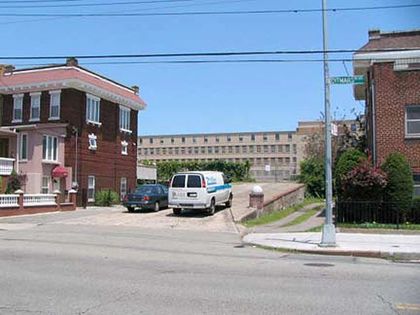 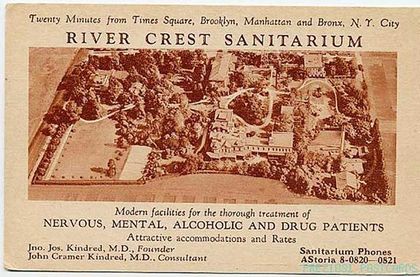 The ramp and gatepost are all that remain of River Crest Sanitarium, established here in 1896. Note the name of the asylum’s founder, “Jno. Jos. Kindred, M.D.” There’s a Kindred Building on 31st St. near Ditmars, most likely named for U.S. Rep. John J. Kindred (1864-1937), a Virginia native who moved to Queens and was elected to the House of Representatives, serving from 1911-13 and 1921-29.

Kindred, a physician by trade, founded several mental hospitals in Connecticut, New York and New Jersey. He was also a practicing attorney. River Crest Sanitarium had closed by 1961. 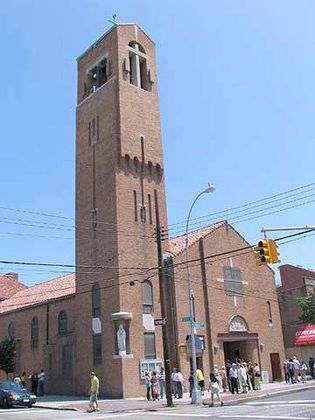 Immaculate Conception Roman Catholic Church—established in 1924, with the present church at Ditmars Blvd. and 29th St. constructed in 1935—ushers in the northwestern boundary of the sub-neighborhood of Steinway. It was named for the piano manufacturer Steinway and Sons (more specifically the firm’s founder, German immigrant Henry Steinway), which still retains a complex at 20th Ave. and 38th St.

Ditmars Blvd. functions as the main northwest-southeast shopping strip, with 31st St. assuming the role on the other axis (Steinway St. is mainly residential north of the Grand Central Parkway). 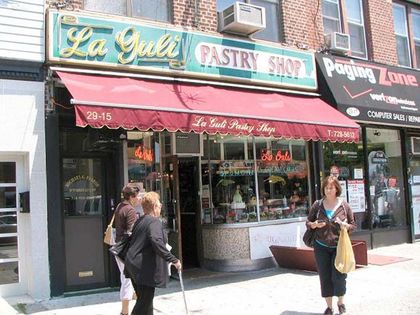 Though Astoria is best known for its Greek-American population, Steinway also has some Italian and Irish pockets; Immaculate Conception offers services in Italian (as well as Spanish). La Guli Pastry (an older sign said “pasticceria”) has operated at this location since its establishment in 1937 by Paolo Notaro, an immigrant from Palermo. The bakery’s still run by the Notaro family. 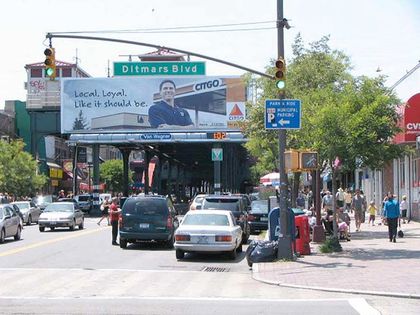 The BMT Astoria Line (N and Q trains) has its terminal here mid-block on 31st St. (formerly Debevoise Ave.) between 23rd Ave. and Ditmars Blvd. It opened as part of the IRT in February 1917 and its el trains crossed the Queensboro (59th St.) Bridge and ran on an el spur to Grand Central Terminal on E. 42nd St.

The BMT 60th St. Tunnel’s opening in 1920 allowed BMT trains to reach Queensboro Plaza, and a massive interchange station was built. The BMT couldn’t run on either the Flushing or Astoria els—its cars were too wide—so shuttles were established to allow the BMT to use those els. Finally, in 1949, modifications to platforms were made to allow the BMT access, and so the Astoria became the province of the BMT, and Flushing the IRT. The Queensboro Bridge connection was severed in 1942 along with the demise of the 2nd Ave. El in Manhattan.